I bought one today. Dealer was unaware of a recall. And yes, the caliber was not stamped on it. No official comment has been made by Taurus about this apparent recall. All firearms imported into the United States are legally required to possess caliber markings stamped or etched into the barrel to a depth of at least three thousandths of an inch.

Hard to believe that the announcement of  Taurus Curve was greeted with such an atmosphere of disbelieve.

Okay, I'm a Dedicated 1911 fan, and as such I look upon such abnormalities as if they are the Spawn of the Devil.  (Much like FaceBook.)

But I had no idea that they were so out-of-mainstream that they didn't even carry serial numbers!

Because they're not a 1911-style pistol, and as such not as good as they can be.

Yep.  I said it.  Why settle for less than the best? 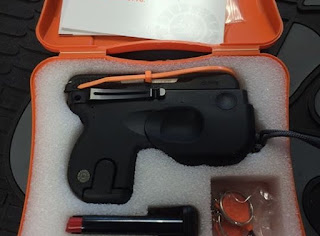 Leaving minor cosmetic details aside, how well do they shoot?