The following story is via the NRA-ILA,

On Monday, May 5, the Senate Law and Public Safety Committee is scheduled to hear Senate Bill 993. Sponsored by state Senator Loretta Weinberg (D-37), S.993 seeks to restrict the maximum capacity of ammunition magazines from 15 to 10 rounds and ban many popular firearms.

Under the guise of public safety, anti-gun politicians continue their efforts to erode the Second Amendment rights of New Jersey residents. New Jersey is one of only a few states which already has a magazine restriction, and another arbitrary limit will have no impact on crime or criminals. Instead, this legislation demonstrably favors criminals who prefer to prey on unarmed victims.

I know this is third-generation information.  If you haven't read this news item elsewhere, though, you need to think about it.

NJ is just one of the MANY states working assiduously to restrict Second Amendment Rights ....
... One Step At A Time.

If YOUR state is unwilling to accept magazine restrictions of 10 rounds, they'll sell you on a 15-round limit.

And then they will turn around and change the law from 15 to 10 rounds, because ... well, you have already shown that you are a whore; what they are doing now is merely dickering about the price.

What's next?  Probably, a five or six round ban, which will essentially eliminate all firearms except revolvers .. if that .. and then all guns will be banned by administrative fiat.  At that point, you won't get a vote.

For the benefit of those states whose citizens are currently dickering with their legislatures; take note of where this "Road To Perdition" will take you.

Lage Manufacturing made this one off Aliens M41A Pulse rifle. It is a M-11 in 9mm shoved into the body of a M41A Pulse Rifle. They used a Remington 870 AOW/SBS for the grenade launcher portion of the Pulse Rifle.


I spend ... not a little time ... reading other gunbloggers.  This entry is a good example of why I find it so informative AND entertaining.

You'll have to go to the link to see the video.   I could give you the YouTube link, but then you might not go see what else is on The Firearm Blog -- and what's the fun in that?

This is why you should stop using Internet Explorer right now | KDVR.com - Denver, Colorado News, Weather, Sports and more: DENVER —

A warning for Internet users: this is a serious enough security flaw that the Department of Homeland Security is warning you to not use Internet Explorer until a fix is found. The problem could put your personal information at risk, and give hackers access to private things like your email accounts. With so many computer bugs out there, Internet users rely heavily on anti-virus software and patches to keep up with each new virus. This time, that’s not good enough.


A few days ago a new zero day exploit for Internet Explorer made the headlines (for the uninitiated a zero day is a new exploit that is made public before the security or technology community have patched against it). In another blow for Internet security and trust after the recent Heartbleed issues this exploit allows cyber criminals to deploy malicious code to your computer silently, without your permission as you visit any given web page with the nasty code on it.


This exploit is particularly nasty as it impacts 6 different versions of Internet Explorer ranging from 6 to 11 (you can see more details on the impact here if you are interested) and allows fairly reliable distribution of malicious code that could do anything from stealing your data to turning on your webcam. This exploit is perfect for a drive by download where you visit a web page and the nasty code silently loads.

(from an unattributed source ...)

Personally, I'm only running XP on my laptop ... and that's due to be updated this summer.   And I don't use Internet Explorer any more.   I was a big fan of Mozilla (FireFox) but that has so much 'overhead' that it uses 80% of available (2GB) memory just to start up.  So I've been using Google Chrome lately, and it's much more economical of resources.

Not to mention that it seems to have fewer "holes".

Most of us already know that Explorer has historically been one of the most vulnerable software applications in the world.  It's virtue is that you can run ANYTHING on it; the problem is that the same structure which makes it "universally" applicable also seems to allow Junior High School students to hack it.

Just saying; full disclosure - I'm not a software engineer so don't take my word for anything I say about computers.

There’s a sad twist to the shooting Tuesday morning at a FedEx facility in Kennesaw, Ga., where an employee injured six co-workers before turning the gun on himself. Kennesaw is one of several U.S. cities and towns that have an ordinance requiring every household to own a gun.


That's true.  It is always "sad" when a fellow employee "goes postal" and attacks his co-workers.  Sad, tragic, disheartening, and ... morbid.

Those adjectives are especially poignant in Kennesaw, where the town passed an ordnance in 1982 "... requiring each head of household to own and maintain a gun".


But as World News Daily reported almost 7 years ago exactly, in an April 19, 2007: article entitled "25 Years Murder Free in GUN TOWN USA",   that small Georgia town enjoyed over a quarter of a century of freedom from murder until, as the WSJ article says, "...  in 2010 a former employee of a Penske truck rental facility there shot five people, killing three."


Lacking other evidence, that seems to add up to 28 years without firearms violence.


Here in the small Oregon College town of Geekistan, we can't claim such a record.  And I wonder, how many other American towns, no matter how small, enjoyed such a lengthy respite from fatal mayhem?


Not many, I would guess.

First, note that there are no laws requiring anyone to actually carry a gun.

Second, consider the evidence of this photo (taken from the original article): 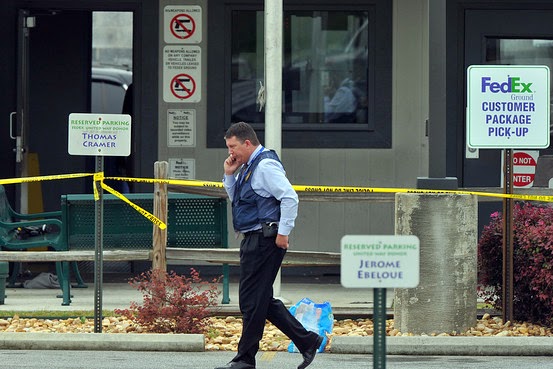 See the signs?  Just forward of the armored walking figure (the picture was obviously taken after the shooting) there are not one, but TWO signs of a pistol in a red circle, with a diagonal slash.  This is the universal signal of a Gun Free Zone.

If you're crazy enough, or evil enough, to be looking for a place where it's 'safe' to go on a shooting rampage .... this is the insignia of "COME SHOOT ME, I CAN'T FIGHT BACK!"

Kennesaw tried, but couldn't hold back the tide of Political Correctness.

The municipal laws didn't cover self-protection in the workplace .. only in the home.

The poor bastards never had a chance.

Oh, to NOT be in Chicago in the Springtime


Four people have lost their lives and more than 30 others have sustained injuries in several shootings in the city of Chicago since Friday night, US police say.

Easter seems an appropriate season to talk about death, murder, random acts of violence in the murderous city in the nation.

For Christians, it's a time to celebrate the resurrection of Christ.

For Chicagoans of every ilk, it's just another weekend when it's not safe to leave your house.

Four people have lost their lives and more than 30 others have sustained injuries in several shootings in the city of Chicago since Friday night, US police say.


(by Allison Geller; Monday, April 28, 2014)
Another violent weekend shook Chicago with shootings killing five people and injuring 35 others between Friday and Sunday.

There must be a reason why Chicago is such a violent town.  Some people (such as the Chicago press), the finger are beginning to point toward Mayor Rahm Emanuel.