Rieder: No, not 'too soon' to talk gun control:


Of course, gun control is hardly a panacea. It won't mean an immediate end to our hideous series of mass murders. And the measures gun-control advocates push will hardly mean endangering Second Amendment rights and wrenching all guns from the hands of law-abiding Americans, no matter what the National Rifle Association tries to tell you. Most of the measures are modest; Obama's centerpiece measures after the Newtown carnage would have established background checks for those buying firearms at gun shows and online and banned assault weapons.
But at least they are a start, an effort to deal with the recurring bloody episodes that have become an all-too-common part of the American landscape. That beats unctuous hand-wringing. The president's remarks about Charleston marked his 14th statement about shootings — 11 of them in the U.S. — since he took office, according to CBS News' Mark Knoller, who keeps track of all things presidential.

Writers like Mr. Reider have already heard the arguments of pro-gun advocates and have rejected them as being either specious or inadequate.

Much like our opinion of Mr. Obama's "modest measures".

The difference is, those modest measures (a) would do nothing to prevent the recurrence of similar tragedies, (b) disarming the public would put even more Americans at risk ["registration", for example, invariably leads to even greater infringement on the Constituional rights of Americans], and (c) the entire article is nothing more than "unctuous hand-wringing".

Turn in your own firearms, sir, but please have the courtesy to avoid undermining our freedoms.


A man went on a machete-swinging rampage in Bryant Park Tuesday morning, slashing a woman who had just left a yoga class in the park in a startling burst of violence on the great lawn.

An hour after the random attack, Kyle Newberry described the incident as “just another day in the city.”

Officers received a 911 call of an assault about 11:30 a.m. near 42nd Street and Bryant Park, an NYPD spokeswoman said. When they arrived, they found a 31-year-old woman with a slash would to her right arm. Members of the park’s private security team followed the slasher with folding chairs for protection as members of the NYPD eventually caught up with the suspect at the south entrance off of 40th Street.S


That must have been especially traumatic for a woman who has just left a Yoga class, with the obvious intent to improve her physical health.   One YOB with a Big Knife has just chopped her life style into bloody shreds. 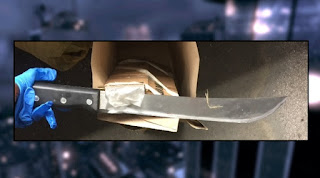 And there wasn't a damn thing she could do about it.  Legally.

In my extended dialogue with a London (England) "Bobby", in 2008, my British friend pointed out that the total ban on firearms has ensured that those citizens who were the victims of random violence didn't die.  Yes, they might have got beaten bloody, sliced and diced, but they didn't die.

What he failed to acknowledge was that Brits are unable to defend themselves against arbitrary attacks by bigger, stronger, better armed and more violence-prone assailants.  (Just as NYC Citizens are similarly made vulnerable,)

Here in the Pacific NorthWet  we have an amazing bunch of local cops who participate in IPSC and Speed Steel type matches.

They're pretty good.  In fact, a few of them tend to win many matches, to the point where (when the civilian Local Heroes are absent) they compete between themselves. Most of the rest of us are just hoping for Third Place.  One local cop was even the USPSA Board Member for our section for a while.

Yes, they actually are that good: not just politically, but so competent as shooters that they have garnered a lot of respect from their peers in the "Competition Shooting Community".

I have watched other PDs running their officers through drills on the range, and I was singularly unimpressed. But the Linn/Benton County guys seem to have their shit thoroughly together in a tight group.

That's not true of ALL LEOs, but in this little section of the Willamette Valley, Oregon, I think that anyone who knows these Bad Boys respect  them.  The local cops (not all of them, but enough) not only demonstrate their expertise at monthly matches at the three local clubs, but they participate as 'members of the community".

Last month the 'local' department held their nth Annual "Toys for Tots" match.  They have established an outreach program where they host an annual match, all profits going to buying teddy bears for abused children.

(Sometimes Family Tragedies leave the children behind as '"un-involved non-participants".  But when Mommy and Daddy are kicking the shit out of other, and screaming in the middle of the night ... the children are more freaked out than their drunken/angry/aggressive/clueless parents.)

It's a small thing, admittedly; but when a toddler has someone else to care for, even a stuffed Teddy Bear, it helps them to cope with a situation in which they had previously had NO control.  Actually, I suspect this program also finances other resources for 'victims' in the county.

All About The Children it's called, or the "ABC HOUSE" match.  Some years it's a Speed Steel match, some years it's an IPSC style match.  And they mix & match the stage designs to attract as many shooters as possible.

I'm quite impressed with the way the Linn/Benton County Police agencies (sheriffs, municipal police, etc.) have individually created an "Outreach" program to support their communities.  I wish all LEO agencies would find the leadership to perform the same vital function.

I would be proud to forward your contact information to local LEO individuals who might provide useful advisory information.


We  all depend on that Thin Blue Line to keep the peace.  So we don't have to.

I don't know if I've ever seen a more egregious example of under-training a shooter.

I found this via the gunbloggers round-table, and for those of you who follow  gunbloggers I apologise for repeating the "DON'T SHOOT A GUN LIKE THAT" post from SayUncle.  (The video has been removed from YouTube, so you must go to the original link  to view the incident.)

DESCRIPTION OF THE INCIDENT:
A female (police?  She has sergeant stripes on her blue uniform) shooting a pistol on a range demonstrates clumsy incompetence as she tries to acquire a prone shooting position, tries several grips, holds the pistol inches forward of her face, and gets a "Magnum Eyebrow" cut when the slide recoils into her face.

(Note that the FIRST thing she does in the video seems to be to flick the thumb safety to OFF .. before she even begins to acquire the prone position!)

Immediately after her injury, the instructor grabs her by the head and ... without first clearing the pistol ... turns her face to the camera to show the bloody injury.

Last Friday I posted an article about a holster the positions your handgun in front of your body.  The point of my opinion was that is seemed a very dangerous way to carry a firearm.  As in "shoot your nuts off" not to put too fine a point on it.

Apparently there are a few other people who generally feel that while there advantages to this carry style, it is inherently risky.  For exactly the same reasons I gave.

The position of the instructor cited in the above linked article isn't that it's a 'bad' way to carry concealed; quite the contrary.  His point is that he is teaching people who may not have sufficient experience to use it safely:

In light of this more precise cautionary note, I'll modify my earlier position.

There are people who have the training and experience to use this holster safely.

Most of the people I meet on the range do NOT have what it takes to do so.

I train strangers how to shoot safely and (more or less) 'competitively' at IPSC matches.   Most of them have no idea how to handle a gun safely under the pressure of a timer; how would they react when found themselves in a defensive situation which this holster is designed to provide an advantage?

It's not just this specific holster.   I've seen adds for a lot of others ... such as one which is essentially an elastic 'belly band with a pocket sewn in'.  Very concealable.  But safe? At most levels of expertise, not hardly.

Of course there are dissenting views, such as this one which insists on "Big Boy Rules" for everyone.

Speed Kills! (OH, sorry; it's the Other Way Around)

Speed the 150-year-old tortoise dies at San Diego Zoo | Fox News: SAN DIEGO – One of San Diego's oldest residents has died. The Los Angeles Times reports that the Galapagos tortoise known as Speed has been euthanized at an estimated age of more than 150 years. ...  The massive tortoise had been in geriatric decline for some time.

There has to be a great punchline to this story.  Damned if I know what it is.
Your suggestions (in Comments) are solicited.

Email ThisBlogThis!Share to TwitterShare to FacebookShare to Pinterest
Labels: Random Acts of Surfing


FREDERICK, Md. – Police say an ice cream truck driver in Maryland was gunned down as he was selling treats to children and a suspect has been arrested.

Apparently, I'm not the only one who cannot abide "Turkey In The Straw"