It depends on what your definition of "works" is


“Sensible gun laws work, we’ve proven it in California, and we’re not gonna give up.”

I'm never sure where Barbara Boxer gets the statistics to back up her absurd announcements, but it's certainly not from the San Bernadino Sun:

At least 36 people have been killed in mass shootings in Southern California in the past four years.

California Legislators have been working overtime in recent years to impose ever more egregious Gun Control restrictions on honest citizens, and the net result is that the murders keep on coming with little or no reduction on the availability of firearms to nuts, kooks, madmen and just plain evil people.

The funny thing (if the word "funny" can be used in the sense of "incomprehensible", rather than "humorous") is that many of the recent slaughters have been perpetrated by people who have jumped through the hoops of the most restrictive gun-control laws in the nation, and the killing continues without any obvious relief.

POLITICIANS like to think that their efforts at imposing ever-increasing infringements on the Second Amendment are "making a difference".   But laws won't stop mayhem.

They will stop honest people from being able to defend themselves, but they won't stop Bad guys.

Laws have ZERO effect on murderers.

(NeverYetMelted makes the case that the weapons used in the San Bernardino shootings were not legally purchased by the killers.)

Oh yeah, Dave Workman has an article in The Examiner (Washington State) which suggests that a year-old gun control law (I-594) isn't doing what it was suppose to do ... stop guns from falling into the "wrong hands.

What effect these "gun control laws" DO have, is a negative impact on the ability of honest citizens to protect themselves.

So, if Barbara Boxer is determined to say that "gun laws work", the needs to go back to her original quote which says that "SENSIBLE gun laws work".

There's nothing very "sensible" about these laws, if you measure it by the actual effect on reducing crime.  Which is .... uh ...  the opposite of positive.

None of the gun control laws imposed on Californians have reduced the number of mass murders, or the number of victims.   The only way these laws can be said to have "worked" is that they accumulate to make it more difficult for honest people to defend themselves in public places.

The definition of insanity is trying the same thing over and over, and expecting different results.

By this measure, Barbara Boxer is certifiable.

If you haven't already seen it, it's worth reading

The issue that should be of interest to all readers here is that religious, speech and firearms freedoms are being blamed for the evil actions of a defective individual, one who appears incapable of living freely among his fellow human beings. And further restrictions on those who do not share those defects will solve nothing, except to make it harder for good people to defend themselves against bad ones.

Here's what happens when you live in a country where there are few, if any, controls on Immigration:

During the last few decades, Swedes have had to get used to the government (left and right wing parties alike) prioritizing refugees and migrants above native Swedes. The high tax level (the average worker pays 42% income tax) was been accepted in the past, because people knew that if they got sick, or when they retired or otherwise needed government aid, they would get it.


Here's what happens when the society is based on Socialism:


Now, Swedes see the welfare system failing them. More and more senior citizens fall into the "indigent" category; close to 800,000 of Sweden's 2.1 million retirees, despite having worked their whole lives, are forced to live on between 4,500 and 5,500 kronor ($545 - $665) a month. Meanwhile, seniors who immigrate to Sweden receive the so-called "elderly support subsidy" -- usually a higher amount -- even though they have never paid any taxes in Sweden.

And here's what happens when you put them together:


Worse, in 2013 the government decided that people staying in the country illegally have a right to virtually free health and dental care. So while the destitute Swedish senior citizen must choose between paying 100,000 kronor ($12,000) to get new teeth or living toothless, a person who does not even have the right to stay in Sweden can get his teeth fixed for 50 kronor ($6).

Why are Conservatives so STUBBORN!

Liberals have an agenda which includes Gun Control, and they cannot understand why Conservatives get so pissy when presented with the mildest of legislative suggestions.


Well .. yes.  Of course.  Demonizing of Conservatives is Job One for Liberals.  They paint Conservatives as Evil.  Selfish.  Aggressive.  Out-of-Control.  Cranky, and just plain not very much concerned with being A Nice Guy.

Conservatives, on the other hand, demonize Liberals as stupid, vacuous, and blind to their own faults.

I don't think that Conservatives are EVIL, but I do think that there must eventually be some kind of reconciliation between the two groups.

I don't thank that Liberals are STUPID, but I do think that as long as each "side" wastes their intellectual energy attacking the other "side", there will be no movement toward reconciliation.

First we need to agree on what is an issue, and what is not.

Then we need to determine what actions might reasonably reconcile the two sides.

I have friends who are "Progressive", and although I find their politics appalling, I think they're honest, wholesome and likable people.   I don't want to be the symbol of their enmity.

I'm just saying "we SHOULD be a nation divided by issues which can be discussed, not undermined  by anger on either side".

Of course, I am NOT giving up a single firearm nor a single round of ammunition, so that's not on the table.

We, the fire-arms owners of America, have been chivied to 'give up' the 'minor issues' for decades, and the gun-grabbers have never backed off until their legislative attempts have been  decided at the federal level.

I'm not sure what's on the LIBERAL side, except that the 800-pound Gorilla in the room is that " .. they want to take your guns away, because it makes them all scary when they're in the room with guns"

Funny ... criminals have guns, and they don't have the comfort of their neighbors as a priority.

Honest people have guns, and the Liberals are more afraid of them than they are of the criminals.

You want us to give up our constitutional rights.  That's not going to happen.  What are YOU willing to give up?

Your life?  That's what you get when mugged by The Bad Guys.

Your Comfort Zone?
If you have one ... it's probably not a reasonable expectation, if you refuse to arm yourself and still expect The Bad Guys not to pick on you.

Picture a herd of .. llamas.  You're a llama.  You're threatened by wolves.  You're comfortable with your life expectancy because wolves typically attack the "sick, lame and lazy".  Which especially includes herd members who are too sick or too young to defend themselves ... because the wolves know that YOU aren't going to do anything to protect individuals;  you just protect the herd.

Picture your children as being outside the herd, and attacked by wolves.  Your "Herd" won't do anything to protect them, let alone rescue them.  Welcome to Liberal City!

What are YOU going to do to protect your progeny?
Nothing?

Or if you're not doing "Nothing", where can you turn for help?
You have a lot of friends, but they're all .. poseurs.

I had a squib once. But it wasn't as obvious as this one. 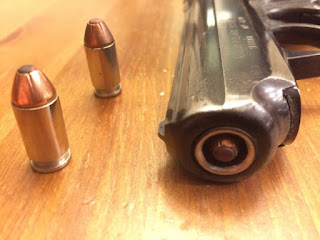 I was at a match, using my S&W 659, and double-tapping like I had just invented it.  Shooting minor power, I needed to be FAST!

Of course, the squib round was the first shot of the double-tap, and I had already pulled the trigger to launch the 2nd round before my brain registered that the gun had gone *POOF* instead of *BANG!*.

Well, I was done for the day.  The barrel had a big bulge in it, I couldn't even rack the slide and it hadn't gone into battery because ... barrel bulge.

It cost me $155 for a replacement barrel, and the gunsmith had a helluva time getting the pistol stripped so you know his fee wasn't insignificant.

The problem was, I was using this LEE Auto-Indexing Turret Press (with the plastic bushing) ... 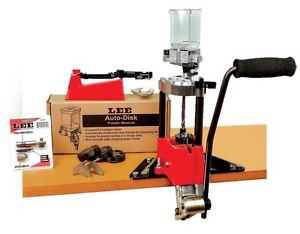 ... and at the time I was using the powder measure and actually rotating the turret.

For some reason it didn't load powder into one of the cartridges.  And I didn't notice.

Note that I assume that I was in that purple haze that sometimes occurs when you start loading ammo at 9pm on Friday Night for the match on Saturday.  Not the fault of the press, it was entirely my fault.
(There are several lessons to be learned from this.)

I'm just glad that I didn't need to replace the slide, as well.

I do wish I had photographed the bulged  barrel, but I didn't at the time and I've lost track of it.  I've moved a couple of times since then, so I probably junked it.

Academia .. what a bunch of Maroons!

So this horse walks into a bar, and the bartender says "Hey, will you sign this petition pledging to send money to Hamas and Hesbolla and all them other dudes?"

Academics are a joke with no punch line.    We should be laughing at them, but this is where our future leaders are taught how to be human.

So far, most of them are abject failures in Humanities.
Not just the students, but faculty as well,

(Project Veritas videos don't always translate to being embedded; see the link here
... or copy and paste this: https://youtu.be/nHBadNyIhzw ) 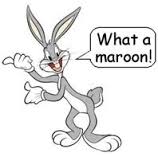 OH ... did I mention that these are universities in CALIFORNIA?


The reality is that most Americans consider owning guns to be not a public health menace, but a constitutionally protected right.  It is part of their heritage.  Rosenberg clearly had no understanding of the American mind on this subject 19 years ago.  This quotation of his from the Connecticut Post in a January 14, 2013 article indicates he has learned nothing in the intervening years: “A more respectful attitude that views guns as dangerous and potentially lethal weapons—and not as cool, sexy, and macho glamour symbols—would help to promote public safety.”

Rosenberg really thinks American gun owners view their firearms as “cool, sexy, and macho glamour symbols”?  This revealing statement typifies the attitude of urban elites toward a subject about which they are woefully ignorant.  They see guns as evil talismans with no social utility whatsoever.  And they clearly are not interested in learning about the long and ingrained American tradition of responsible gun ownership.


Dr Timothy Wheeler (MD) has written extensively on the Doctors for Responsible Ownership website about the positive aspects of firearms ownership.

I recommend you read the entire series;
Part 1,
Part 2 (which is also the link for the leading quote), and
Part 3.

There are other links and quotes available in these sections of the monograph, many of them worthy of bookmarking for future reference.

While you're there, you might consider looking at other articles in the Doctors for Responsible Gun Ownership  (DRGO) website