Giffords and Kelly Group: Get Help? Surrender Your 2A Rights | Shall Not Be Questioned:

If you look at all the mental health “reforms” that the gun control crowd is pushing these days, if even half of them passed, the end result would be that I’d never seek medical help for any problem I might have ....

Sebastian makes a simple, yet elegant case against the "Mental Health Reporting" issues which are current in Gun Control America today.   If we seek health for emotional issues, with the very fact of seeking help result in confiscation of our firearms?

I'm not confident that the issue has been intelligently researched, let alone resolved.  It doesn't help that the "reporting issue" hasn't been widely discussed (in public) my the Mental Health Practitioners whose newly assigned duties are being bandied about ... are prepared to assume that responsibility.

My understanding is that Mental Health Practitioners (let's call them "Shrinks" for the purpose of brevity) are not entirely on board with this newly defined responsibility.

This is an extremely "touchy" issue for Psychological therapists:

I spent much -- too much -- of yesterday and today watching videos and reading news stories about Man's Inhumanity to Man.

When I look at the scenes of inhumanity coming from Iraq and Syria, I'm struck by the horror.

When I view the riots by the residents of Missouri, where a community has so far resisted the impulse to butcher their neighbors while they destroy their own infrastructure and economy, I'm appalled.

And when I read of the partisan infighting in the halls of Congress, I'm depressed when I realize that it is less appalling only in comparison; the actions are less bloody, but no less demoralizing.  The worst is that I accept these contentious bouts as "business as usual".  How have I .. how have the American People ... become so blase'?

My only solace has been found by reviewing the words of a great American, Mark Twain, who was more erudite in expressing his dismay using a kinder, gentler weapon:  humor.


(I'm still looking for the routine based on the punchline "Good-bye God, I'm going to Missouri.)

"Perception is more important than Reality."

SIXTY NINE YEARS AGO TODAY ... August 15, 1945 .... Emperor Hirohito announced his nation's surrender in a war which was was started by HIS nation on December 07, 1941, by a perfidious 'sneak attack' on Pearl Harbor, Hawaii.

In a way the world owes Japan a dept of gratitude, because President Roosevelt was not yet committed to ACTIVELY supporting Europe's fight against Nazi Germany.

The Japanese were not the real enemy .. until they attacked America.

History has shown that America is reluctant to go to war,  but unrelenting in staying power, once provoked.

(Well, except perhaps for the past decade ... but that's a history still in the making. As Dr. Martin Luther King implied, our leadership should be judged by the content of his character.)

My uncle was killed in Germany; he was a sergeant in that war.  I was born on the day when the U.S. Flag was flown on Mount Suribachi, on Iwo Jima.

Two memorable photos commemorate both the battle of Iwo Jima ..... 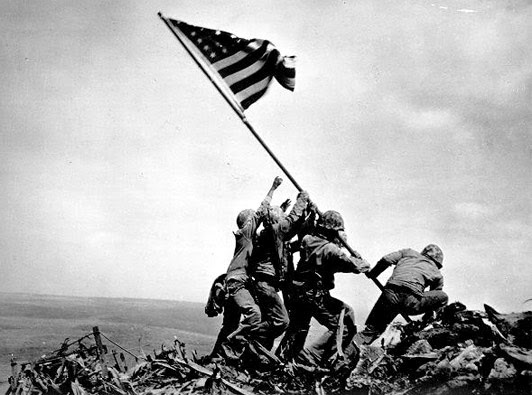 ... and Victory over Japan Day. 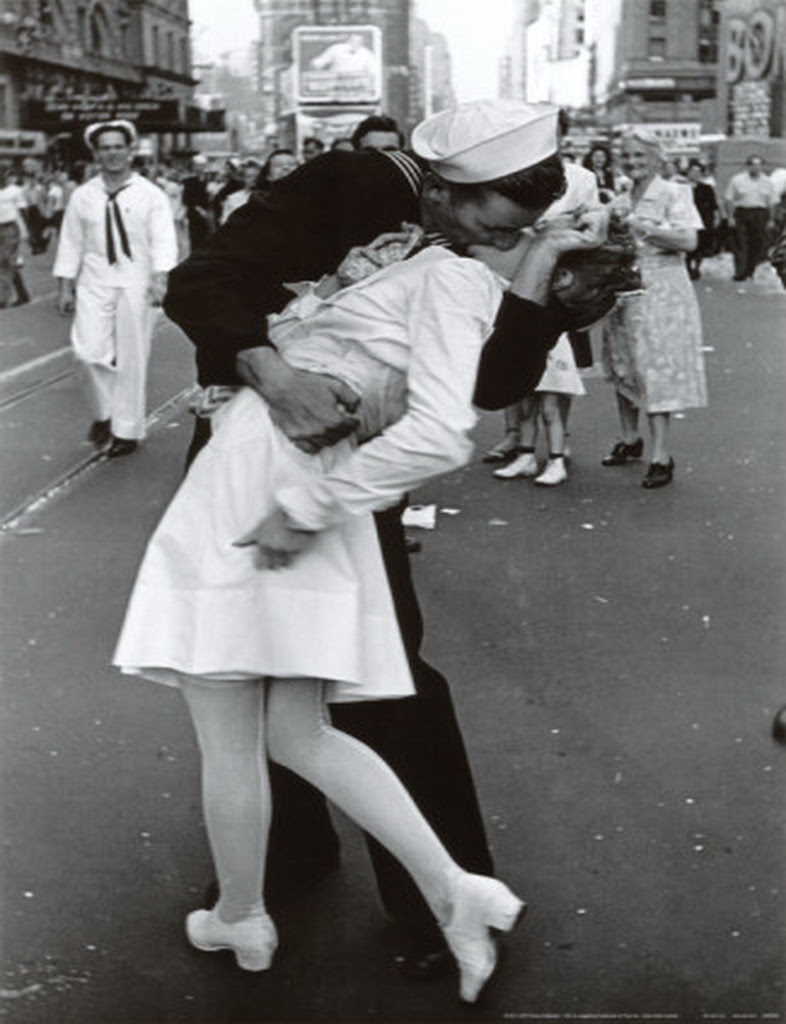 (My Son, "The Squid Kid", actually has a reproduction of this photograph hanging on the wall of his family quarters at Whidby Island NAS.)


On this day in 1945, Emperor Hirohito broadcasts the news of Japan's surrender to the Japanese people. Although Tokyo had already communicated to the Allies its acceptance of the surrender terms of the Potsdam Conference several days earlier, and a Japanese news service announcement had been made to that effect, the Japanese people were still waiting to hear an authoritative voice speak the unspeakable: that Japan had been defeated. That voice was the emperor's. In Japan's Shinto religious tradition, the emperor was also divine; his voice was the voice of a god. And on August 15, that voice—heard over the radio airwaves for the very first time—confessed that Japan's enemy "has begun to employ a most cruel bomb, the power of which to do damage is indeed incalculable, taking the toll of many innocent lives." This was the reason given for Japan's surrender. Hirohito's oral memoirs, published and translated after the war, evidence the emperor's fear at the time that "the Japanese race will be destroyed if the war continues." A sticking point in the Japanese surrender terms had been Hirohito's status as emperor. Tokyo wanted the emperor's status protected; the Allies wanted no preconditions. There was a compromise. The emperor retained his title; Gen. Douglas MacArthur believed his at least ceremonial presence would be a stabilizing influence in postwar Japan. But Hirohito was forced to disclaim his divine status. Japan lost more than a war—it lost a god.

Power of the People comes from the Government. Or ... not.

People, especially young men, want power, to feel empowered. Welfare laws what they are, there are few good fathers to be role models in a lot of inner city “families.” Boys and young men look for “strong” men to emulate, and they see gang-bangers above shop-keepers in the social hierarchy. The anti-gun laws have created the inner city gang problem, and here is the underlying mechanism. Gun laws are not only unconstitutional, they are anti-human, they are anti-black, anti-business, anti-woman, and anti-equality. As people are wont to say, “read the whole thing.” It’s not long.

I tried to comment on this statement, but my input could not be accepted.  Which is probably "A Good Thing", because what I have to say is too extensive to be embodied in a comment form.

Here is what I was trying to say:


It's another way of saying that you are respected if your overlord (in this case, the government) cannot or will not stop you from grabbing power.   Shop-keepers are intrinsically law-abiding citizens, so if their government will not allow them to have "local power", these honest citizens have no recourse but to bow down to those who will TAKE power.
All of the negative consequences follow from the governmental decision to rule by fiat.  The Poor Man without power --- TAKES power!

Sex, lies, and Videotape .. and guns.

You may think that John Stossel espouses views that are anathema to your own politics.  I think that's A good Thing, and we need to consider his views on Raw Milk, Property Ownership, and Prostitution in the same vein as the Second Amendment.


This Stossel special will blow your mind! The government, especially the EPA is out of control as well as local prosecutors trying to make a name for themselves.

America, and the Jeffersonian Interpretation.


I hold it that a little rebellion now and then is a good thing, and as necessary in the political world as storms in the physical. Unsuccesful rebellions indeed generally establish the incroachments on the rights of the people which have produced them. An observation of this truth should render honest republican governors so mild in their punishment of rebellions, as not to discourage them too much. It is a medecine [sic] necessary for the sound health of government.”

"This is NOT going to look good on my resume!"

The post title is a direct quote from "Good Morning, Vietnam", in which Robin Williams played Adrian Cronauer.

Cronauer was a DJ for Armed Forces Radio/ Vietnam in 1969/1970.   His line is delivered when a young Viet Namese boy, who was becoming a friend of his ... committed suicide by blowing himself up.

Williams was an erratic master of comedy; often, his humor was more black humor than humor.  Often, I didn't like the routines he did.  I remember "Toys" as a true downer.    I remember "The Fisher King" when he played a secondary character:   "I have a hard-on for you as big as Florida".

He played the bad guy in a couple of movies,  like Insomnia and One Hour Photo.   I couldn't picture him as the bad guy.

And also in HOOK, which was a hoot.

He was ever the complicated character, who had more to offer than what was just on the surface.

Well, not EVER!  He had many characters, many roles, but that undercurrent was always there, and maybe that's what made him such an accomplished comic.

In later years, I gave up watching him.  I regret never having watched "Patch Adams", for example.

Maybe I will, someday.

Now is not the time for my usual rant about the "selfishness" of suicide.  My bias is still there, but Depression is something than many of us have experienced.

He must have felt beyond redemption, to have hanged himself by his belt and slit his wrist as well.

I wonder how anyone can so ignore the love that people feel for us, that they believe their only recourse is to end their own life.  Are we more to blame than they?  Was Robin Williams' self-image so difficult to  reconcile with his universal love that he didn't know he was loved?  Or did he feel it was only 'surface', and not worth living the life?

While I remain unconvinced that suicide is a valid out, short of debilitating/painful disease, yet  I still mourn for him.

Maybe he's looking down on us today (I don't believe the religious bias which demands that suicides are irredeemable) and seeing how much he has been loved.

I hope so.  He contributed more to humanity than most of us ever will.

Email ThisBlogThis!Share to TwitterShare to FacebookShare to Pinterest
Labels: suicide

Just canisters of black gunpowder removed earlier were enough to pose a danger to nearby homes, according to Kugler. He said the amount appeared to more than 30 pounds, more than the amount that can be legally stored. “Our goal is to document and remove the gunpowder and render the house safe,” Kugler said. “Certainly the amount that is in there has a potential to be a hazard not only to the house but to the adjacent neighbors as well.”

It's funny, but learning that your neighbor had 30 pounds of black powder stored in his home frightened his neighbors.

But if he had two Cadillacs in his garage with gasoline in their tanks, they wouldn't have thought twice about it.

Which is interesting, which you look at the "Energy Density" of gasoline compared to gun powder. *
According to my figures, if he was storing cars in his garage instead of gunpowder in his basement, his neighbors would have been MUCH more at risk in case of fire.

But people tend to freak out when they learn that gun powder has been stored next door.