DNC 2016: Lights over Oregon delegation cut after chants of 'No More War' | OregonLive.com:

And we PAY them to do this?


McKelvey said tension over that difference of opinion hit new heights Wednesday when the arena cut the lights over the Oregon delegation as they chanted, "No More War," during former Defense Secretary Leon Panetta's speech. "It's a theme of the convention," McKelvey said, "that Bernie Sanders' supporters are supposed to be quiet and sit down and take it."...
After the lights were cut, the California delegation shined their cell phone lights toward the Oregon group and started chanting, "Lights," McKelvey recalled. Oregon delegates responded by turning on their cell phone lights and waving them as well.
"It's not an awesome look for the DNC," he said. "I understand aesthetically why they would want to turn the lights off so we couldn't be seen doing what we were doing."
Officials at the Democratic National Convention did not immediately respond to requests for comment.
LaFleur said she's been in Philadelphia's Wells Fargo Center "from gavel to gavel, everyday" and nothing like this has happened before.
It's not the first time Oregon delegates have protested during the convention. When Clinton was named the official nominee, many of the state's pledged Sanders delegates walked out of the convention. 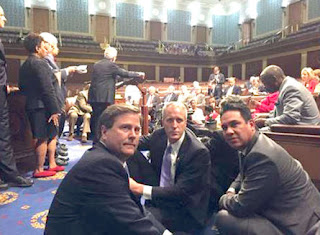 ... AND YOU CAN BELIEVE AS MUCH OF THIS AS YOU WISH

Anyone falsely portraying this gun control debate is 'trying to sell you something':


“There is a very specific type of gun that we want banned – none of them,” said Dan Gross, president of the Brady Campaign. “All we are trying to do is keep guns out of the hands of people we all agree that shouldn’t have them. Whether you love or hate guns, you agree that a convicted violent criminal, domestic abuser, someone who is dangerously mentally ill, or a would-be terrorist should not be able to get their hands on guns.”

Hillary Clinton at DNC 2016 on 2nd Amendment: I'm not here to take away your guns | AL.com:

Hillary Clinton told delegates at the 2016 Democratic National Convention she had no interest in taking away anyone's guns but didn't want others to be a victim of firearm violence. Speaking in Philadelphia, Clinton said: "I'm not here to repeal the 2nd Amendment. I'm not here to take away your guns.


ATF HEAD: Our Job Is Not To Take Away People's Guns


In his first television interview, Bureau of Alcohol, Tobacco, Firearms and Explosives (ATF) Deputy Director, Head Thomas Brandon tells CBS' "Sunday Morning" that the agency's job is not to take away firearms from people, but to regulate weapons that can be misused.

"We're a small agency with a big job," Brandon tells correspondent Richard Schlesinger, in an interview to be broadcast Sunday, July 31.

Brandon also says his agency is hampered by not having the necessary technology. Congress has imposed constraints on ATF, such as prohibiting the agency from creating a computerized database of gun purchases.

We don't want you to database our purchases.  Can you guess why?

I have a very specific instance to illustrate exactly WHY American Riflemen (gun owners) don't believe the lies of politicians.

I've written about this many times before.

In the late 1990's California Attorney General Bill Locklear published a 'finding' that the SKS rifle was a legal firearm, but required only that they be registered.

After honest, law-abiding citizens owning an SKS rifle registered their guns, Locklear performed an about-face and declared (arbitrarily, and without justification) that SKS rifles were NOT a legal rifle, and required that all SKS rifles be confiscated.

It's not so much  that the guns were confiscated; it's that a 'trusted public servant' took advantage of our trust, and then betrayed us

Those of us who are legal gun owners have since been reluctant to accept the assurance of politicians that we have nothing to fear from registration.   Locklear may have done more harm than good by his underhanded, pusillanimous, arbitrary mismanagement of office.  He had, in a single stroke of the pen, done more to undermine the American Rifleman's faith in his government than any other single official.

And his legacy lives on.

No American will ever again trust any politician who suggests that 'registration' is nothing more than a technicality.

Registration has been proven to be the first step toward confiscation, and nothing that any mere politician -spit- may ever say again in favor of registration will be believed.

And as for Locklear:  may the fleas of a thousand camels infest his scrotum.

New evidence confirms what gun rights advocates have said for a long time about crime - The Washington Post:


Lawful gun owners commit less than a fifth of all gun crimes, according to a novel analysis released this week by the University of Pittsburgh.

There are a few 'poisoned bullets' hidden within the editorial:


In the study, led by epidemiologist Anthony Fabio of Pittsburgh's Graduate School of Public Health, researchers partnered with the Pittsburgh Bureau of Police to trace the origins of all 893 firearms that police recovered from crime scenes in the year 2008.

.. but it's YOUR fault, because you own (owned) a gun and it ws used in a crime.  You are automatically suspect.


More than 30 percent of the guns that ended up at crime scenes had been stolen, according to Fabio's research. But more than 40 percent of those stolen guns weren't reported by the owners as stolen until after police contacted them when the gun was used in a crime.

So, because your gun was stolen, and you didn't realize it (as the author offers in amelioration), you MAY NOT have reported it as stolen.   So you are now a suspect in a crime which may be much more serious that burglary.

"We have a lot of people with a lot of guns," Fabio said, referencing statistics on the large number of guns in circulation, "And some of them aren't keeping track of them for different reasons — maybe because they have a lot of them and they don't use them that often."

All of this brings us down to the recent plethora of state laws which require firearms owners to report lost or stolen guns within (a variable amount of time) or face prosecution.

There are anomolies, as in the Sandy Hook Elementary School Shooter who murdered his mother in order that he could steal her guns from her gun safe.   And then murder children and teachers.   So it's easy to understand why The State would want people to report stolen guns 'promptly'.

(Nancy Lanza was not charged with failing to report a gun theft; well, she was dead.)

First, because Law Enforcement people can be aware that a firearm used during a crime is not necessarily one used by the original owner to commit a crime.

Second, because if a firearm is recovered at the scene of a crime and traced back to the original owner, if that owner says "oh, yeah .. that was stolen from me MONTHS ago!" ... the police can say: "uh huh, and why did you not report it???"  (And you are put on the top of the suspects list.)

Third, because as soon as a firearms owner reports a stolen gun, the information that this person owns a gun (and may own more guns) is part of the information police want to know when they investigate an possibly-non-related crime.  As in:   "we can't have a firearms registry, but this is an "indicator" that we can treat you as a suspect person and a possible hazardous contact".

(Just because we're paranoid, that doesn't mean that we're not a target.)

Nobody Wants To Take Away Your Guns! (Except for the dangerous ones)

We've been hearing a lot about the media-inspired (and vaguely defined) "Assault Rifles".

In an attempt to accelerate the daily "Two Minutes Hate", gun-grabbers and the media have introduced a new term:
"High-powered rifles".


... gun control advocates from the West Coast are banding together to call for a 10-bullet magazine restriction and a ban on all high-powered rifles they call assault weapons. 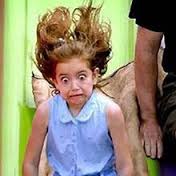 But while the term "High-powered rifles" may scare little girls, it's suggestive of "Another Gun Ban Movement" ... which might be scarifying to little old men.

In truth, the Left, the 'Anti-Gunners' and other media whores are becoming more adept at inventing new political platforms from which they can attack The Embarassing Second Amendment.

As usual, there is no definition to the term.  In my home state, it was illegal illegal to hunt deer with a caliber less than .25* (which has since been changed in the game laws).

Now that the .223 and the .22-250, etc. are legal to hunt 'big game', does that mean that every deer rifle in America will be confiscated by the Gun Haters?

Well, that does seem to be the trend.

But remember: "Nobody Wants To Take Away Your GUNS!"

Just the dangerous ones.

Trey Gowdy speaks to the NRA


(July 15, 2016)
He's a brilliant oratorian, and as such he's a bit frightening as he is gathering power along with his popularity.

Email ThisBlogThis!Share to TwitterShare to FacebookShare to Pinterest
Labels: gowdy

Tom Cruise is not believable in this role.

He talks too much.

And he's too small, in too many ways.

I'll see the move when it comes out on DVD... in about three weeks.