Kids stealing the show, literally, with a so cute lip-sync routine for the holidays. The boy who does bass really gets into it! This was of the many fantastic songs performed during the annual "Living Christmas Tree" performance at the Florence Baptist Temple in Florence, South Carolina. A gospel quartet's van broke down nearby and the quartet took to the stage with this hilarious performance. Be sure to share so you to can "spread joy" to others.


Oh my, we are getting into the Christmas Spirit now.

As is often the case the Hat-Tip goes to The G-man, who somehow manages to find the most interesting videos on the Internet.

I, on the other hand, don't promise to NOT get all grouchy before the holidays are over.  I can only hope that you can enjoy THIS, and recognize that even though I'm probably going to be ranting about things like all-lead bullets being banned nationwide .... it IS The Season To Be Jolly.

Definition of the term "Selfie"

Eeek. It’s already an entry for that tumblr, Selfies at Funerals. Obama was photographed taking his own photograph with none other than British Prime Minister David Cameron and Danish Prime Minister Helle Thorning Schmidt. They were in attendance at Nelson Mandela’s memorial service in Johannesburg at the time, at which Obama gave a speech. Probably not the best time, guys?

Approximately 40 million credit and debit card accounts used by Target customers may have been impacted by a major data breach, the retailer said Thursday.
Customer names and credit or debit card numbers are involved in the breach—along with the expiration date and three-digit CVV security code of each card, the store said.
Shoppers who made purchases at their stores between Nov. 27 and Dec. 15 were urged to check their debit and credit card accounts and report suspected unauthorized activity to the firm.


"And I heard him exclaim, as he rode out of sight,
Merry Christmas to All, and to All a good Night!"

This comes as no great surprise to me, and it probably doesn't surprise you, either. Need I point out that November 27 was the day before Thanksgiving?  The thieves cleverly timed their incursion through the Thanksgiving/Black Friday and then (supposedly) kept the good times rolling until the Retail Monster of America caught the hack.

Not to sound as if I approve of what may turn out to be a mega-million dollar White Collar Crime, but one can't help but admire their timing and their expertise.

Give me a moment here.

We don't know who did this .. one person or a Russian Mobster Conspiracy?  Was it the bunch of idiots who send me Nigerian letters on a weekly basis?  At this point, it doesn't matter.  For the sake of convenience, let's call him/her/them "The Grinch(s) Who Stole Christmas".

...
Ignoring for the moment the financial disasters that the Grinch(s) have imposed upon thousands of American consumers, we might consider that Christmas has been transformed into a mercantile moment in the last half of this century...or longer.  It is no longer a time for Christians to reflect upon the Advent of Jesus Christ, but a time when we feel obligated to spend our childrens' inheritance in order to provide presents.  Most of those presents may not even be what they want, but only what we can think of to give them.

I have no idea what to give a pair of five-year old boys, for example.  Or 8 or ten year old boys, or ten or 13 year old girls!  I'm (mumble mumble) year old, and while I'm clueless I know that it's not enough to tuck money into an envelope and tell them to buy their own darn toys!  Yet, that's probably what I'll end up doing ... if only to avoid the crowd of last-minute shoppers.

Now I have another reason to avoid shopping:  How am I suppose to protect myself from Identity Theft in this turmoil?
As for the "financial disasters", I find I'm changing my opinion even as I type.

At least I have a good excuse for avoiding chain stores between now and Christmas,

Yeah ... that "money in an envelope" thingie is starting to sound a lot better.

Much Beloved Child,  please accept this gift of cash money.  I'll take you to the store, and together we can pick out something that you REALLY want!

(Hint: five dollars seems more substantial, when it's all in quarters.)

About six years (2007?), some 25-watt congress-critter decided that incandescent light bulbs were WA-a-a-a-a-y too twentieth-century and we should all use "Compact Flourescent Lightbulbs"  (CFL) to light our home.   Never mind that they contain Mercury and, if we break one, we should call in a Federal Agency to sweep up the debris (never happen!); they're energy efficient, and this is what we should be doing to Save The Environment!

No, I never understood this either.

But I decided to give it a try.

I went to my local hardware store and bought a "60-watt equivalent" CFL  My front porch light had burned out, as happens about annually, so I decided that even thought the Politically Correct Lightbulb (PCL) was more expensive, I would give it a try.

See ... there aren't a lot of streetlights on my home-town cul-de-sac, and there's this trick step up to my front door.  It's particularly tricky if I or my guests have had a couple of adult beverages before they come to my door.  So I leave my front porch light on all day, all night.  Every day.  Every night.  I never turn it off ... that's when light bulbs go BLOOEY, y'know, when you turn them on.

So I leave it on all the time.

I figured it would last about a year, and then I would replace it with one of the incandescent bulbs I bought in case-lots a while ago and have been hording ever since.

A year later, it was still burning.

I got tired of replacing my hallway light in 2009, so I bought another 60 watt Politically Correct Bulb and plugged it in.  I live in a "town-house duplex", which means my hallway light illuminates my stairwell.  It has been burning 12 hours a day or so, on the average, for four years.

Then In 2010 I got tired of replacing the front room light.  Yep, another PCL.  In 2011, I put a PCL in my Hell Room (the spare bedroom upstairs where the computer is).

I still insisted on two 100-watt Incandescent lights over the mirror in my upstairs bathroom, but they burned out every six  month and they're a pain to replace.  The light is kind of funny up there now, but I've grown accustomed to not looking to close when I shave in the morning anyway, and it's a good excuse for the unnatural greyish tint to my hair when I DO look too close.

This morning I opened my front door at 5am, to take the trash to the curb for my weakly garbage collector.  It was dark out there!

I'm not accustomed to dark at my door, so I got a flashlight to see what was wrong, and ... the light bulb was missing.

Somebody stole my freakin' light bulb!

I don't know if someone decided they needed a light bulb more than I do, or if one of my neighbors grew annoyed at having the lights always on at Chez Geek.

One thing's for sure;  I need not worry about disposal of a burned out CFL/PCL.   Apparently all I have to do is leave something lying around and someone will steal it.  Disposal is THEIR problem, now!

My reaction was just to go to my cupboard an pick out another 60 watt (equivalent) CFL and screw it into the front porch light socket.

Yes, I'm still hoarding Incandescent bulbs.  But I now buy CFLs by the six-pack .... about once a year.  They DO last longer, and as such they cost less to buy.  (I bought this six-pack over a year ago, and I still have four bulbs left!)

As for the low-down bottom-dwelling scum-sucker who stole my porch light?

I really hope it was someone who was annoyed by my 24/7/365 porch light.  Because however much the bulbs cost, it's worth it if I annoy my neighbors ... especially the couple next door with the whining dog who starts yapping and howling at 9am every morning when they leave for work!

I may be old and crotchety, and I'm definitely petty ... but I ain't cheap.

On November 9, 2013, we explored the legal ramifications of plastic guns created by the new 3D imprinting technology.  I mentioned at the time that I was looking forward to the turmoil when The Federal Government scrambles to find away to combat this menace to civilization.

It didn't take long, according to this BLAZE article from December 11, 2013:


With a group hoping to promote “popular access to arms as guaranteed by the United States Constitution” by developing a working design for a 3-D printable gun, a Democratic congressman has called for the renewal of legislation that would ban plastic guns. But would it really put a stop to the 3-D printed gun project?
Rep. Steve Israel (D-NY) late last week issued an announcement for legislation that would renew the ban of plastic guns under the Undetectable Firearms Act, which will expire December 2013.
“Congress passed a law banning plastic guns for two decades, when they were just a movie fantasy,” Israel said in a statement. “With the advent of 3-D printers these guns are suddenly a real possibility, but the law Congress passed is set to expire next year. We should act now to give law enforcement authorities the power to stop the development of these weapons before they are as easy to come by as a Google search.” 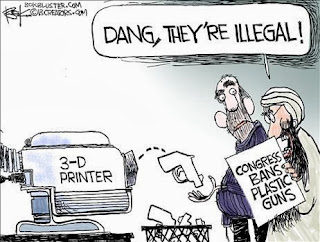 The "public outrage' which led to fast action by Congress might have been fueled by this article from Think Progress ... a progressive tranzie website which has long been opposed to anything which allows the individual to duck the Nanny State rule over their lives and their Constitutional freedoms:

On December 9, a law banning firearms that can go unnoticed by a is set to expire. Since 1988, the Undetectable Firearms Act has banned undetectable guns, which can be made from plastic through 3D printers.
Sen. Charles Schumer (D-NY) and Sen. Bill Nelson (D-FL) have introduced legislation that expands the undetectable firearms law to ban 3D-printed guns, require guns to be recognizable as guns, and them to contain significant metal. “The expiration of this law, combined with advances in 3D printing, make what was once a hypothetical threat into a terrifying reality,” Schumer said, according to the Associated Press. Rep. Steve Israel (D-NY) introduced his own version in the House to renew the law. Still, the urgency of the issue does not mean Congress will take up the bills in its remaining days.
Even the soon-to-expire law contains a major loophole that permits plastic guns as long as they have a small metal piece that could be easily removed. One widespread model, the Liberator, uses a nail so small that it would not be picked up by metal detectors. The Bureau of Alcohol, Tobacco, Firearms and Explosives recently tested the model, only to find that “the .380 bullets fired from the Liberator penetrate sufficiently to reach vital organs and perforate the skull.”

Let's think about this.

I'm so fed up with this two-party system, which consists of The Progressive Trans-Nationalists, and The Stupid Party.  Why can't Republicans find a sane, electable Presidential candidate who is a true conservative?

Oh, by the way, you probably cannot produce a workable firearm in your home using a "$2,000 3D printer".