I've been reading this book for the past week, taking it slow because there's some thought provoking information to digest.

It's worth the read if only because it provides a good reference to some of the (most comprehensive) national gun control laws, and the tweaks made in them by 'frustrated' legislators. 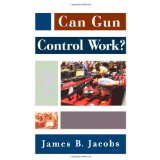 While the author (James B. Jacobs, who has also published books discussing drunk driving and hate crimes) makes an effort to remain neutral, neither advocating for or against the concept, there are so many circumlocutions it's obvious that he has little expectation that gun control laws perform any greater service than to inconvenience honest, rational citizens.

He cited a couple of studies which were interesting.  Especially ...

Professors Phillip Cook and Jens Ludwig in 1997 sought to test empirically the impact of the Brady Law by comparing gun crime trends  in the 32 states where The Brady Law (I) ["treatment" states] was effected vs those 18 states where it was not effected (because their state gun laws were already more stringent than Brady) ["control" states] .

The effect of the Brady Law was to add a waiting period and background check to those 32 treatment states,

Paraphrasing Jacobs:  Cook and  Ludwig compared the rate of change in violent crime in the Brady ["treatment"] states to the rate of change in the "non-Brady" ["control"] states.   Their study was based on the hypothesis that "... the trends in firearm homicides and suicides in both treatment and control states  during the 1990 - 1993 Pre-Brady period ... would be expected to continue on a parallel course unless the Brady Law had a significant impact".

(Jacobs notes that the rate of violent crimes in America had been declining for most of the century.)

The results of the study included a startling statistical truth.

(emphasis in the original)

I rather liked Jacobs' conclusion; probably because he agrees with me on that point.

Jacobs concluded this section by observing:

"Because there was no significant difference in homicide or suicide trends, the  authors rejected the hypothesis that a waiting period reduced handgun homicide and suicide.  This finding is consistent with most previous evaluations of state-level background checks and waiting period laws."


So we're still left with the question, can gun control work?

Well, if enacting new gun control laws provides steady 'work' for lawyers with an inclination to be elected to the legislature ... sure.  They work just FINE for law makers.

They don't do much for the rest of us, though.