It has been a LONG time since I offered a BlogMeat post. I've been very aware of the link from Michael Bane's Outdoor Gallery, and I've made a concerted attempt to cleave to shooting competition related subjects.

I'll do that here, but it's time to add a little more spice to the Geek Blog.

I can't show the 1GB of still photos and videos I recorded at the match ... I had problems with my Video Shooting Gallery software and couldn't upload the files for a few days.. It's not that big a problem, as I haven't edited any of the files although I would have liked to have uploaded the raw files even though they are HUGE and (as the word implies) un-edited. I'll work on editing the videos, and begin posting them eventually at this album on the gallery. You can see the progress so far by clicking on the Video Shooting Gallery on the sidebar, and selecting the "Area 1" album.

Fortunately, friend Norm the Ungrateful has already made a number (the number is 11) of his personal videos available.

You can see them here, on Google.

Here is the solution.

Clicking on the link will allow you to download an EXCEL spreadsheet (978kb) containing all the Overall stats from the Area 1 match. That is, the results from all stages and the match total with ALL divisions ... including points, time, penalty points, hit factor, stage % and % of available points.

This compilation is provided courtesy of our friend, Stephan Zopfi (aka "Zippy"), who has also generously shared his 100mb zip-compressed file containing all of the photos and videos he filmed during the match.

Now you can see how badly you -- and I -- bombed during the match.

Here is a good place to compare the theoretical (read: what the computer projects in animated video) comparison between the current Chevy Camero and Ford Mustang performance.

You'll have to download the executable files, but they look fairly impressive when you run them.

Which car wins the race 80% of the time?

Well, that would be telling, wouldn't it?

This video (downloaded from Comcast.net) demonstrates that young Paris should keep her day job. Other advice for Paris: lose the hunk, learn to drive, and for goodness put some clothes on!

If you can't beat 'em, change the rules!

Sure, I had planned to spend this entire week blogging about the Area 1 match. But sometimes, "Life Happens". In this case, "Life" is defined as "Breaking News" in the Pacific NorthWet.

Today I received an email from "Mister Completely", a fellow PNW Gun Blogger. Apparently he competes in a gungame known as "Falling Plates" (your guess is as good as mine, I've never tried it) and is noticably successful. 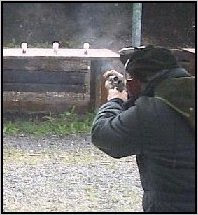 As a consequence, the Match Director (I'm still guessing here, as I don't have details) of the local host club decided unilaterally that he was winning too many matches, and the reason is that he has been using a two-handed grip which is, or ought to be, illegal.

Just to make sure that this point is not lost on the local participants, the MD sent out an email which specifically makes it illegal.

The reason the grip on the pistol should not be legal?

The hands are not touching.

Still guessing, this grip lends an unfair advantage to those competitors who are using guns sufficiently long that they can GET two hands on the gun without the hands touching.

Well, that's obviously a big NO-No! Next thing you know, people will be cutting the stocks off rifles and using them in what is purportedly a pistol competition. Then the Equipment Race will just take off, and the sport is no longer do-able for The Average Shooter.

We've seen this trend time and again in IPSC (although with somewhat more substantial justification), although it has never lead to a ban on competitors because of their grip ... usually, it leads to recognition of another division of competition when it involves equipment. One wonders why said MD didn't redefine the sport in terms of equipment instead of, for cryin' out loud, the GRIP!

More often, we've seen this approach used in Gun Control legislation: subject gun is deemed an Assault Rifle because it features a pistol-grip stock and a bayonet lug, or some such trivia.

I probably don't understand the issue here, and I admit that I have only one side of the controversy.

You can (and should) go to the link on Mr. Completely's website and read the whole story, including the original announcement from the MD and Mr. Completely's response (essentially: if you're going to arbitrarily change the rules, I'll vote with my feet thank-you-very-much!)

Can't say that I blame Mr. Completely. He got the Bum's Rush, and if it happened to me I would also be inclined to take my football and go home.

I gotta say, I've looked at the picture and it (the grip) doesn't look particularly stable to me.

You might say that the MD is entirely justified in his decision. I don't agree, but I do remember Pete Townsend of The Who saying:

I have hours, only lonely
My love is vengeance
That's never free