Obama vs LBJ ... no difference

The deployment marks the first time U.S. troops will be working openly on the ground in Syria. A senior administration official called it a "small" deployment, involving "fewer than 50" Special Ops Forces to northern Syria.

Bad gun! Back in the box!

Back to the drawing board: The worst firearms ever made - Photos - Washington Times: See the most ill-conceived weapons of ever made.

Okay, okay, I see your point, WaTimes.   A lot of guns built for 'special purpose' not only didn't prove appropriate for "general use", but didn't even prove effective for their (usually very limited) purpose.

The slide show is amusing and the author does a good job (mostly) of making his point.

But I do have a quibble with the second choice: 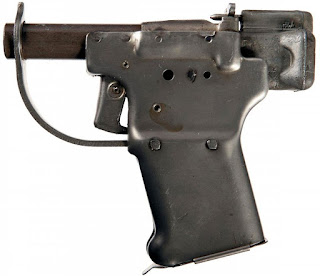 The FP-45 Liberator was a pistol manufactured by the United States military during World War II for use by resistance forces in occupied territories. The Liberator was never issued to American or other Allied troops and there is no documented instance of the weapon being used for its intended purpose, though the intended recipients, irregulars and resistance fighters, rarely kept detailed records due to the inherent risks if the records were captured by the enemy. The FP-45 was a crude, single-shot pistol designed to be cheaply and quickly mass-produced. It had just 23 largely stamped and turned steel parts that were cheap and easy to manufacture. It fired a .45 caliber pistol cartridge from an unrifled barrel. Due to this limitation, it was intended for short range use, 1–4 yards (0–5 m). Its maximum effective range was only about 25 feet (7.6 m). At longer range, the bullet would begin to tumble and stray off course.


As I recall, the "Liberator" was specially designed as a single-use assassins' gun.  It was dropped by airplane in occupied territories in hopes that on resisting civilian would pick it up and use it to shoot one unsuspecting Nazi.

I've read anecdotal evidence that it was used for its designed purpose, but I've never found any story which had been independently collaborated (excuse the expression) by reliable authorities.

Yes, the design was to make a cheap throw-away belly gun.  The lack of believable sights was a give-away ... nobody cared if the gun was inaccurate at any distance beyond a belt-buckle.

Perhaps the Nazi occupiers were aware that these throw-aways were being airdropped by the thousands and being picked up by resentful restless natives, and perhaps they weren't.

After all, as the Liberal Matra can permissibly be perverted here:

There is a Wiki link to the gun,

Email ThisBlogThis!Share to TwitterShare to FacebookShare to Pinterest
Labels: Be Very Afraid, Just For Fun

It's tough being a parent.

You can tell your kids about the dangers of sex, but if they think they want it (and they do), they're going to ignore you.

Australia is now trying to deal with this problem.  Yes, the same Australia that Hillary and Barak are holding up as the very model of a modern "reasonable, common-sense" nation.

'There hasn't been this much weaponry on the streets since the days of the underworld war': police: "Something obviously needs to be done about the guns out already out there. We need to look at harsher sentences. There's no justification for carrying an unregistered gun and we need to be harder on people that decide to, or there'll  be a lot more shootings," the officer said.

The thing is, Free Citizens and Teens have a lot of common; if they something they want, they're usually going to get it.

Enacting anti-gun laws is very similar to telling your child "NO!".

"Smiling People Tell Lies"* ... but I'm inclined to pay attention to this interview.

At least he seems sincere.  Time will tell, and I'm always too contrary to accept what's said just because it's what I want to hear.

For now, we'll give him a "bye" and hope that he really is more open than J. Edgar was.

*yes, I know it's not the Temptations version, but that's 12+ minutes long.  You can go here to see it.

Would you trust this man to babysit your children? I wouldn't trust him to hold my coat.


Some people are just born bad.  And sometimes (as in this case) they try to TELL us ... but we just don't listen.

There was a day when we were taught to trust our judgement; now the Liberals tell us to be "non-judgmental".

THIS us what happens when "feel-good" Liberal attitudes cause us to over-ride our common sense.

We can't know the whole story, but there is prima facie evidence that the man meant no good, right from the start..

It's written all over his face.

Hillary Clinton says "Australia is a Good Example" as a model for American Gun Control. ?

Hillary Clinton seems determined to resolve "The Gun Control Issue".
Her approaches are different from mine;  I think gun control means hitting your target.  Hillary thinks gun control is ignoring the Second Amendment to the Constitution.

Well, she's younger and wiser than I am.

But she has never spent a sleepless night in her bed listening to the sound of gunfire in her neighborhood, knowing that there are neighbors who would kill her for the $11.27 in her purse.

She is an academic.  She has no real-world experience with actual day-to-day violence.  She cannot possible relate to the millions of people in Hillary-Stan who face danger just walking down the street.

She is a politician; everything she says is carefully tuned to "Let's make it sound like she is doing something to resolve the problem".  Granted, as a politician she IS a target.   And so are we all, targets.  Whether in our neighborhood or in our homes, we are always targets.

The problem is, only law-abiding people pay any attention to the laws she would pass.  The trouble makers in our world ignore the laws.  Laws won't keep guns off the streets, they will only disarm the innocent.