Do Guns Kill People? – See the exciting Video for PROOF!!

I think every Brady Campaigner and Moms Demanding activist should monitor this website; preferably, recording the live feed as proof of their claims that firearms are the root of all evil.

Posted as in informational text for those who carry a concealed weapon.
[H/T: thegunfeed]

If you haven't already seen this article, check it out; it may save you some embarrassment in the future. Even if you think you already know what is 'the right thing to do' if you're stopped by the police while you're legally carrying a firearm on your person, it should reinforce the message:

(Introduction from the video:)

CPSO: How should you react when pulled over with a firearm in yo - KPLC 7 News, Lake Charles, Louisiana:


The Calcasieu Parish Sheriff's Office has teamed up with Legally Armed America to create an instructional video on how you should act if you get pulled over and have a firearm. The video demonstrates the difference between a compliant and non-compliant driver. It also explains some dos and don'ts if you have a weapon on you when you get pulled over.

I won't steal the traffic from the original article, so go to the above CPSO link to find the video.

The ultimate message, of course, is: "don't be THAT GUY!"

San Francisco - sanctuary for everyone but legal residents?

Folks in the San Francisco Bay Area are complaining about "youth" attacks on defenseless citizens.


A man was beaten and kicked in the head Thursday by a group of a half-dozen youths just outside the Richmond BART Station, police said. The man, who was not identified, was expected to survive, said Lt. Felix Tan, a spokesman for the Richmond Police Department. BART police initially responded to the scene around 11:30 a.m. — at the transit terminal frequented by buses directly outside the station — because they thought the incident was under their jurisdiction. Five to six juveniles assaulted the man, according to BART police. Officers said they could not locate the attackers, who escaped in the surrounding neighborhood.

Curiously, either the newspaper or spokesmen for the Bay Area Rapid Transit (BART) authority, or the Richmond Police department refuse to identify the "demographics" of the "youths".   The claim is that revelation of their race might lead to racial violence, or something.

As if they don't already have that, in the Bay Area.    Remember Katherine Steinle?

Whether the attackers were blacks, or Mexican "immigrants", or a group of fun-loving Nob Hill teenagers on a lark from across the bay is left for the reader to imagine, based on one's own personal racial bias.   The only thing that seems certain is that if the attacking "youths" were caucasian, it would have been printed in the paper ... if only to prove that the attackers were not minorities, or were not illegal aliens  undocumented immigrants.


Personal Note: I lived and worked in the East Bay area (Oakland) for several years, back in the '80s, where I got my first job in the Data Processing business.   My wife and I decided to move elsewhere after the lady who lived in the next-door apartment was mugged by three  black adolescent girls in the parking lot of the grocery store in the next block.  They beat the shit out of her, stole her purse and scattered the groceries all over sidewalk, so I guess they weren't trying to feed their families.

That attack, too, happened during the middle of the day.

... and SF WEEKLY even has a round up of bizarre crimes of the week.

Chicago ... eat your heart out.  You have the body count, but you don't have the Fruits-N-Nuts contingent to provide violence with a kink.

Street weapons like 'zombie knives' are to be outlawed under a dramatic crackdown:


SICKENING street weapons such as zombie knives and knuckledusters are to face a complete ban, under a dramatic new crackdown. Home Secretary Amber Rudd will today propose to make possessing them illegal everywhere, whether in public or at home.

No, they're not outlawing ALL knives ... just "bad knives".

Judging from the photo accompanying the original article, it appears that the Brits don't like serrated blades, curved blades, long blades, thin blades with sharp pointy ends, and anything else that looks "sickening". 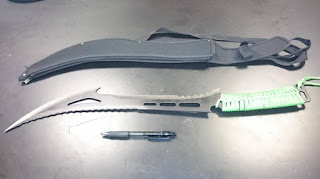 The article doesn't provide much details ... well, they're Brits and not as good at details as they are at sensationalism.

Not that "The Amis" (we Americans) are much better at defining the things we choose to ban; look at our government's attempt to define "Assault Weapons" so they could keep said weapons out of our irresponsible civilian hands.

It seems to me that there is no difference between governments in "The Free World" and "The Tyrant Countries", except that we here are suppose to be the masters and the government our servant.

Yes, we are just that gullible.

(BTW ... Note to Mark:  I'll have the deed to that bridge in the mail to you as soon as your check clears.)

(See Below The Fold for references)