A hotly contested gun-control law that was passed in 2007 is finally ready to be implemented, Attorney General Kamala Harris said Friday: a requirement that every new semiautomatic handgun contain "micro-stamping" technology that would allow police to trace a weapon from cartridges found at a crime scene.

The law, signed by then-Gov. Arnold Schwarzenegger, made California the first state to require micro-stamping, which engraves the gun's serial number on each cartridge. But the legislation specified that it would take effect only when the technology was available and all private patents had expired.

The gun owners' group Calguns Foundation tried to forestall the law at one point by paying a $555 fee in an attempt to extend a patent held by the inventor, who wanted it to lapse. Gun manufacturers said the technology was expensive and ineffective, and a National Rifle Association lawyer has threatened a lawsuit.

But at a Los Angeles news conference Friday, Harris announced that micro-stamping had cleared all technological and patenting hurdles and would be required on newly sold semiautomatics, effective immediately.

From February through July, 2008, COGITO ERGO GEEK presented a series of articles which explored the Wonderland Imaginations of "inventor" and NRA member Todd Lizotte.

(In December, 2008, I presented a summary article comparing "Microstamping" with "Encoded Ammunition" ... both proposals were dismissed as being fiscally impossible, and unreliable in terms of their stated purpose: to identify the firearm responsible for criminal assault based on 'indicia microstamped on the shell casing'.   For the full patent application, see the patent application:
"Method and apparatus for reading firearm microstamping - US 7111423 B2")

Essentially,  Lizotte envisioned a 'minor change in the production process' where-in unique identification information would be embossed on either the firing pin or the breech-face of a firearm.  (Which part of the firearm would stamp the code on what part of the cartridge case seems to be subject to interpretation; both alternatives are problematic but the current understanding seems to suggest that the FIRING PIN would stamp unique identifying numbers on the PRIMER."

MICRO-STAMPING ON THE PRIMER: 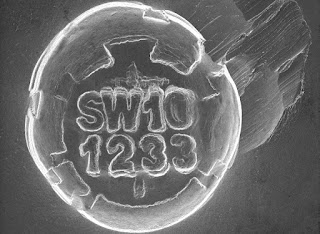 MICRO-STAMPING ON THE CARTRIDGE BASE: 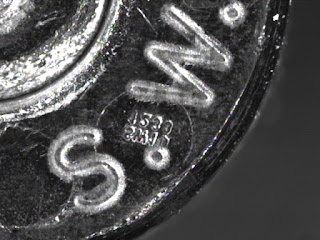 In 2007, "Arnold, the Governator" actually got the California State Assembly (?) to pass a bill requiring that this technology be included in every semautomatic firearm sold in California.  There was one provisio, however, which addressed Inventor Lizzotte's patent.  Since the inventor stood to make millions in patent rights, the law would not come into effect until the patent had expired.

The patent has now expired.  Lizotte, for his sins, stands to make no more than 'chump change' from his Grand Idea ... if that.  As a consequence, the California law is automatically enacted.

California has found the perfect end-run on the Second Amendment.

Citizens on California will no longer be able to buy new semi-automatic pistols at 'reasonable prices', which hurts all but the most affluent of Californians.

Yes, this law is directly targeted to discomfort all but the very rich.

Henry Ford became one of the richest men in America early in the 20th Century when he proved the benefits of Mass Production.  Make every part identical to every other part, and assemblers may build the most complex machinery by just dipping a hand into a bucket of each part.  The parts are all made to the same specification, so they will all fit perfectly.

Before, machines were made mostly by hand, with each part hand-fitted (filed until it fit) to match the abutting parts.  This was hand-labor, and Ford successfully replaced it with machine-labor.

Lizotte's brainstorm, however, takes us back to the cottage industry era where 'some' individual parts must legally be matched with 'other' individual parts.  In this case, there are two alternatives of unique parts which must match.

FIRST UNIQUE PART:
The Serial Number of each firearm is typically stamped, embossed or engraved on the receiver of each firearm.  In a pistol, that is the Frame.  All other parts may be replaced without need for registration or AFT tracking, but The Frame is The Gun.

Until this time, both manufacturers and repairmen (gunsmiths) could interchange any other individual parts with the Frame, and it would remain the same firearm.

SECOND UNIQUE PART:
With the new California, there is another Unique Part:  Depending on the wording of the law, either the Firing Pin or the Breach Block (eg: the breech face of the slide, in most semi-automatic pistols) must be be constructed so that when the firearm is fired, the unique coding number is impressed by the force of recoil on some part of the cartridge.   That is to say, the unique code is MICROSTAMPED on the cartridge.

For the sake of discussion, let us assume that the unique code is part of the firing pin, rather than the breech face of the slide.

When the pistol is fired, the slide retracts and at the same time the initial striking force of the firing pin is magnified by the action/reaction effect.  This provides sufficient energy to emboss that code on the firing pin.  The cartridge is ejected, and if it is left at the scene of a crime it may be examined to determine the make, model and serial number of the pistol which fired it.

This information would allow Crime Scene Investigators to access a DataBase which matches each unique identifier ... that information may not actually be embossed on the cartridge primer ... which would lead to federal records identifying the original purchaser of the firearm.   Which, logically, would identify the perpetrator of the crime.  This is the "Logic of Lizzotte".

PROBLEMS WITH THE LOGIC:

Honest people might try to accommodate the legal requirements, but it would be a hugely expensive process in terms of time, effort and money.  Dishonest people would find a way around it: file off  or fill the Micro-Stamping on the firing pin, or the slide breech face; find parts which do not carry the Micro-Stamping features.

In fact, in sheer frustration, even honest people would be inclined to substitute (for example) a $3 firing pin of no pedigree whatever for a $300 firing pin with the legally required Micro-Stamping.

This law, this process, this concept ... is not a 'crime stopping' measure at all.  It is merely one more lame (albeit elegant) method by which local entities might logically impose draconian regulations on firearms ownership.

Surely, someone in the state of California must realize that this is a 'feel good' law which will only serve the cause of Gun Control, not of Crime Detection.