It's Saturday Night, and I'm suppose to be resetting my Dillon XL650 to load .38 Super ammunition. Instead, I'm looking at old videos from IPSC matches past.

I haven't had the pleasure of watching SWMBO shoot for a long time, even longer than I've been shooting in Open Division. Tonite, I'm going to do both. Virtually speaking, of course.

This first video shows SWMBO and John M, when they were both in better health. There is no question that both John and SWMBO are having a good time. Do you realize how difficult it is to shoot well when you're laughing like a crazy woman?

And how often do you see a competitor who is having so much down-home FUN that she grins while she's shooting?

Not very often, and not lately.

The Second Video shows two different approaches to Stage 2 ... the last stage in the match for this squad. It's a very well designed stage, free-form and "shoot 'em as you see 'em". There are as many ways to shoot it as there are people to run the stage.


This third and final video shows SWMBO as she shoots Stage 2. She's doing a great job, but loses track of her ammunition management priorities and ... well, just watch.

Okay, so she made just one tiny mistake. But she sure had fun shooting it! And was she daunted by adding another few seconds to her stage time?

Sometimes, when we're competing at an IPSC match, we become so goal-oriented that we forget what we're there for.

SWMBO never forgets ... she's there to be with her friends and to have a good time. Sure, we're trying to practice our skills and to train for the hypothetical "Big Matches", which are much more demanding. But how many of us expect to compete in -- and win -- a Major Match?

I think SWMBO has the right idea. She always loves the people and the play of competitive shooting.

I've never seen a Grand Master enjoy a day at the range more than SWMBO. Who is to say she's wrong? 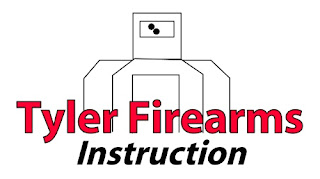 Albany Rifle and Pistol Club will be hosting a 1 day IPSC/USPSA class at their range taught by Grand Master, Keith Tyler.

Bring 800 round to make sure you don’t run out.