"I have erected a monument more lasting than bronze". (Horace)

Join me in spending some time admiring the artistry of a true master of Liturgical Art Glass.

I am in awe, and I'm sure you will be as impressed. 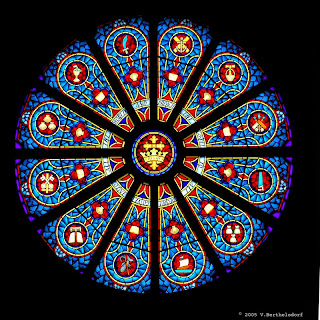 A Vancouver man who fired a shotgun in the air to scare off car prowlers has refused a plea deal and says he's sticking with what's become known as the "Joe Biden defense."
Jeffrey C. Barton was at the Clark County Courthouse on Tuesday and had his trial set for March 26 on a misdemeanor charge of illegally discharging a firearm.
The 52-year-old told The Columbian he will not admit any wrongdoing for the incident last July because he was protecting his family, within his Second Amendment right, and following advice from the vice president.
In response to a question about home defense, Biden told an interviewer in February Americans don't need semi-automatic weapons because a couple of blasts from a shotgun will scare off intruders.

The NRA (according to the Washington Post) says that the advise is 'unwise', if not "Illegal" --- as the article suggests:

“Great advice, Joe. Not only would that be illegal, but then a woman would face an attacker with an empty shotgun. For tips on safe and responsible gun ownership, ask the NRA, not Joe Biden.”

Biden has been a United States Senator from Delaware for 36 years, and I still can't get over the concept that a state ... even one of the smallest states in the nation, can continue to re-elect The Senior LameBrain in Congress year after year after painful year.  He makes Dan Quayle look smart!

The odd thing is ... there is something in what he says.

A shotgun, especially a double-barreled 12 guage, is a very good choice for a Home Defense weapon.
Like a Revolver, a loaded double-barreled shotgun can sit in your closet for years and still be as effective years later as it was when you first loaded it.  Unlike semi-automatic weapons, the ammunition is not retained in a spring-fed magazine.  The second round is as reliable as the first.

(We're assuming that this is an exposed-hammer variety, of course; the spring tension is not loaded until the hammers are cocked; and nobody ... not even Joe Biden .. would have a shotgun with the hammers cocked.  At least, we hope not.)

Because of the problem of "The Tyranny of the Majority".

The concept of "The Tyranny of the Majority" states that when the majority rules, and the government must -- or chooses to -- dictate policy based on the dictates of the majority, then the people learn that they can get anything they want based solely on their desires .... not necessarily based on their needs or their inability to provide for themselves.

This was a cautionary of Alexis De Tocqueville in his book "Democracy in America":

"Tocqueville speculates on the future of democracy in the United States, discussing possible threats to democracy and possible dangers of democracy. These include his belief that democracy has a tendency to degenerate into "soft despotism" as well as the risk of developing a tyranny of the majority .... ".

Another interpretation of the term "tyranny of the majority" is "Mob Rule".

The American Founding Fathers introduced the Republican, rather than the Democratic system of governmental philosophy (along with the attendant "Electoral College") specifically to avoid this "Mob Rule" aspect of a true democracy.    True democracy works well for small groups; the Greeks found it worked well for city-states.  But in a nation of over a third of a billion citizens, the temptation is strong for the sick, lame and lazy to prey upon the productive minority.

True, President Obama has not yet turned America into a Socialist state; he has not yet nationalized industry.

Well, there's General Motors, and "Organized Labor:, and savings & loans, and banks, and the entire "mortgage industry", and  ... but that's all the fault of the Bush Bail-Out.

However, George W. Bush did not intentionally commit the entire National Debt for the next ten generations for the purpose "redistributing the Wealth of the Nation".

This is the avowed goal of our current president.

[Hat Tip to The Hobo Brasser]

This enraged the President, who demanded a full investigation.

After a month of testing and $1.73 million in congressional spending, a Special Presidential Commission presented the following findings: