It's The NRA's Fault!

Girl Killed in Kentucky Mass Shooting Handed to NRA as a Sacrifice by Aunt - Slog - The Stranger: The AP reports that Bailey Nicole Holt, a teen shot last week at a high school in a rural Kentucky community, was "the salt of the Earth." Of course, this is total bullshit.

And of course, that's a fair description of this .... editorial?   Opinion Piece?

This may be the most incoherent article by a (supposedly) professional journalist I've ever read.

It's rambling, poorly composed, and follows none of the rules for essay writing as defined in Strunk and White "elements of essay"; point/counterpoint; thesis/antithesis; etc.   (I hear that Strunk and White are dead; now I believe it!)

It's not that I necessarily disagree with the author's point; it's just that I'm not quite sure I know what the author was trying to say.

Well ... he thinks "guns are bad"; that much is clear.   But it all seems to be an emotionally charged rambling hog-swill of rhetoric.    Did I mention "chaotic"?

I appreciate anti-gun essays which make me think; I don't agree with them, but I do grade them.

(Think of the old joke about the woman who said of lecherous advances: "I will not respond to them, but I will grade them!")

This one rates an "F" grade, but only because no lower ranking is available.

So tell me something I DON'T know!


A New Jersey assemblyman says that he wants to limit the amount of ammunition a firearm can hold in the state. Democratic Assemblyman Lou Greenwald reintroduced legislation would limit the amount of ammunition a magazine could hold from 15 rounds to 10. The bill also designates a semi-automatic rifle with a fixed magazine capacity exceeding 10 rounds as a prohibited assault firearm. Greenwald says that his plan will save lives.

I think that there exists in the word processors of New Jersey reporters a form which they can fill out to announce this same message ... every week.

All they have to do us fill in the blanks:

A New Jersey[enter position here] says that he/she wants to limit the amount of ammunition a firearm can hold in the state. Democratic [enter position here] [enter last name here] reintroduced legislation would limit the amount of ammunition a magazine could hold from 15 rounds to 10. The bill also designates a semi-automatic rifle with a fixed magazine capacity exceeding 10 rounds as a prohibited assault firearm. [enter last name here] says that his plan will save lives.
<30>

You know you've read the same press release at least once a month for the past ten years.

Democrats; they are true to their creed, they will do anything to get their name in the newspapers, and they haven't had an original thought since the Kennedy era. 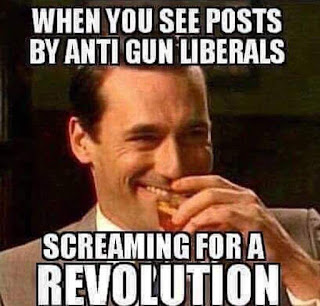 State of the Union Speech 2018

There is a lot of controversy about the STOTU speech, but I think this is the seminal moment (via NBC, a branch of the Democratic Party):

Trump talks unity, sows division in State of the Union - NBC News:
Mary Kate Cary, who was a speechwriter for President George H.W. Bush, said Trump cornered Democrats with his "call upfront for Democrats to join him on common ground. ... Pelosi looked like she was about to barf."


Full text of the State of the Union Speech available here .

It's one of the most enduring speeches in the history of our country.
It celebrates the humanity of America.

It's so powerful, it made Nancy Pelosi want to barf.

It don't get no better than that!

PS:  What is the Democratic response (other than Pelose)?

See here for totally unanimous outrage by the Celebrity Posturing-Set; they decimated the President's speech before he even gave it!  (They are SO predictable.)