On a personal note ...
I just heard that my Sister's Daughter's Son's Wife gave birth yesterday to SON: Carter Arron ......

... which (if you have lost track of the generational implications) makes me a Great Grand-Uncle!

Mother and Son are doing well.  Father ... perhaps just a bit Sky-Hawked?  Can't blame him for feeling out-of-this-world.  I remember when my own first child was born.  I didn't know how to handle it.

Now I know how to handle the birth of a new GEEKSTER:


New legislation is forcing gun manufacturing company Beretta to uproot and take their business elsewhere.
Established in 1526, Beretta holds the distinction of being the oldest active firearms manufacturer in the world. The U.S. factory is located in Accokeek, Maryland, and has been a staple of the local economy for years.
Beretta warned that stricter gun control laws would push the company outside of state lines, but that didn’t stop Maryland legislators. Jeffrey Reh, a spokesman for Beretta who also serves as the President of Stoeger Industries under Beretta, announced that the company would begrudgingly uproot and take its business elsewhere. He said, “We don’t want to do this, we’re not willing to do this, but obviously this legislation has caused us a serious level of concern within our company.”


Following the lead of other firearms-related business (see: HiViz Shooting Systems Leaving Colorado, Credits State Gun Laws, a link in my last blog article), Beretta has decided that they too are no longer are willing to add .. well, "$31 million in annual taxes" to the coffers of a state which denies firearms freedoms to its citizens.

Beretta is voting with its wallet.

Al Gore famously lost his bid to the Presidency of the United States of America in 2000 .. not even winning in his own home state of Tennessee ... because of his paranoid views of the right of individual Americans to responsibly possess firearms.   Since then, Politicians have carefully danced around the question of "Gun control" because they know that such a political stance would lose them elections.

It took a Lame Duck Socialist President to bring the subject up again, and individual Liberal states have been encouraged by his example to attempt imposition of draconian and nonsensical gun control laws at a state level.

This has backfired on them; publicly and dramatically.

The President has spent this nation into a debt-crisis which is akin to mini-states such as Greece, and Cyprus, and cannot reasonably afford to enact or even encourage such unpopular laws.  True to form, though, this President has decided that he can freely look only to the liberal mindset and ignore the wishes and preferences of Americans who are just as politically savvy, and much more likely to protest arbitrary lawmaking in a way which will hurt professional politicians worst; in the voting booth, and in the pocket.

The states which follow his example are now incurring the wrath of not only local voters, but also their tax base.

It's still far to early to determine whether the Liberals in this country are willing to listen to the protests of outraged conservative citizens.  (Probably not: agendas are the dreams stuff is made of!)  But one thing is sure:  the price for voting your prejudices has gone up, and will doubtless be felt in Colorado and Maryland.


Personally, I've never bought anything from either Hi-Viz or Beretta ... but I will, before I ever vote for another Liberal Democrat.

It's an easy choice to make, even without the tax protests.

( I wrote an email to a friend on the East Coast recently, stipulating why I thought that Maryland Gun Control Laws ... which my friend found so onerous ... was anethema to my mind.  After I finished,  I realized that this was a good "First Draft" of a explanation of my own support of the Second Amendment.  This is that draft, with the personal information removed.  Yes, it's still a rough-cut, and I probably won't provide a finished draft.  Perhaps it's something that you can kick around and "make it better".  Please ignore the crude transitions as I tried to make clear, it's all just a stream-of-consciousness letter to a friend; it's not intended to be an UberPost. )

REGISTRATION
Registration is the first step, the second step is confiscation.  California proved that decades ago.  Citations are available, but we don't care to go into the details.

Also, Registration means that the state knows "who has what".  None of their business.  The Federal NCIC (National Criminal Identification Center) ensures that "bad guys" can't buy guns; if you buy one, and pass the NCIC test ... that proves you're not a bad guy.  The Feds are prohibited from keeping the details of any firearms transaction, or using that data for ANY purpose other than identifying criminals who try to buy a gun, and prosecuting them.  "Good Guys" data is deleted in a matter of days.

So, NCIC is designed to support current federal law, which says that felons can't own guns.  That's the sole purpose.

It is NOT intended to be the first step toward registration.

States Rights notwithstanding, states can NOT violate constitutional law.  See the Second Amendment.  (For that matter, see the First Amendment, and everything else .. including the little-known Third Amendment, which prevents both states and feds from quartering soldiers in your home;  one of the primary issues which lead to the American Revolution.)

"THE RIGHT ... TO KEEP AND BEAR ARMS SHALL NOT BE INFRINGED".  That means that the feds (and therefore, the states) can't xxxx (mess) with it.  At all.  States and municipalities have recently been slapped down for attempting to INFRINGE this right; see "Heller", for a start.

Recently, there have been challenges to the degree in which that amendment is applicable to the states.  Supreme Court decisions have supported the constitutional right of all non-felonious citizens to own firearms .. at least in their homes.  The current Left-Wing mantra is "what do you need a (military styled firearm) for, anyway?"  The answer to that is embedded in the Miller Decision (193???), in which a judge decided (in an uncontested case .. the  chargee was a bootlegger who had a shotgun) that the right of a citizen to own as short-barreled shotgun was not protected because it was not a "military arm".  Actually, if the guy charged would have shown up for his trial .. he would have easily proven that the U.S. Army used short-barreled shotguns (then called "Trench Guns") during WWI.  The odd thing is, that according to MILLER .. only military type firearms are DEFINITIVELY protected by the Constitution.  So ... at least  one state court has defended the right to keep Military arms, which sets a precedent.

(All of this stuff is being written "off the cuff", so I'm not providing links to the specific court cases.  You can look them up, for your own edification.  Since this is only a once-over-lightly "overview", I hope you will be comfortable with accepting that what I say is based on research; perhaps it may even be more effective if you do the research yourself, so you don't think I'm just smoking you here.)

SECOND AMENDMENT:
Look at the test of the "badly worded" amendment:  http://en.wikipedia.org/wiki/Second_Amendment_to_the_United_States_Constitution

A well regulated militia being necessary to the security of a free state, the right of the people to keep and bear arms shall not be infringed.

That curious comma has been the subject of a lot of discussion.  Bear in mind that the Colonists in 18th-century America had experienced a lot of problems with the "standing army"imposed upon them by the British.  (Remember the reference to the 3rd Amendment, earlier?  Those folks did NOT like British Troops!)  So, the point of a "well regulated militia" is not a casual, throw-away line as some people interpret it to be today. Instead, the founders and the authors of the Constitution were saying:

"We don't like an army telling us what we should and shouldn't do, so we're going to have our OWN guns .. and if those Limey Bastards get in our face again, we'll blow them all to HELL!"
(But they said it as nicely as they could ... and made damn sure it got into their constitution!)

Remember the shot heard 'round the world?  Remember Concord?  Those Limey Bastards had confiscated our rifles, and locked them up in their armory.  We took 'em back!  And when they came to get our rifles from us again .. we blew them all to HELL!


So, what's the point of all this?  Not that we're wanting to get into another Revolutionary War, for damned sure!

We just want to avoid the entire unpleasant experience.

Say, rather:  "You run the government, and we'll keep our guns.  We'll accept a few silly little laws, but don't touch our guns because ... well, remember Concord?"

And THAT is why the Second Amendment is so important.  It's not about hunting.  It's not about personal defense.  Even though those are part of it .........
... it's about Government Gone Wild.

Ignorance of the law ..

"Alfred Anaya was a genius at installing secret compartments in cars. If they were used to smuggle drugs without his knowledge, he figured that wasn’t his problem. He was wrong."

Alfred Anaya took pride in his generous service guarantee. Though his stereo installation business, Valley Custom Audio Fanatics, was just a one-man operation based out of his San Fernando, California, home, he offered all of his clients a lifetime warranty: If there was ever any problem with his handiwork, he would fix it for the cost of parts alone—no questions asked


. Anaya’s customers typically took advantage of this deal when their fiendishly loud subwoofers blew out or their fiberglass speaker boxes developed hairline cracks. But in late January 2009, a man whom Anaya knew only as Esteban called for help with a more exotic product: a hidden compartment that Anaya had installed in his Ford F-150 pickup truck. Over the years, these secret stash spots—or traps, as they’re known in automotive slang—have become a popular luxury item among the wealthy and shady alike. This particular compartment was located behind the truck’s backseat, which Anaya had rigged with a set of hydraulic cylinders linked to the vehicle’s electrical system. The only way to make the seat slide forward and reveal its secret was by pressing and holding four switches simultaneously: two for the power door locks and two for the windows. 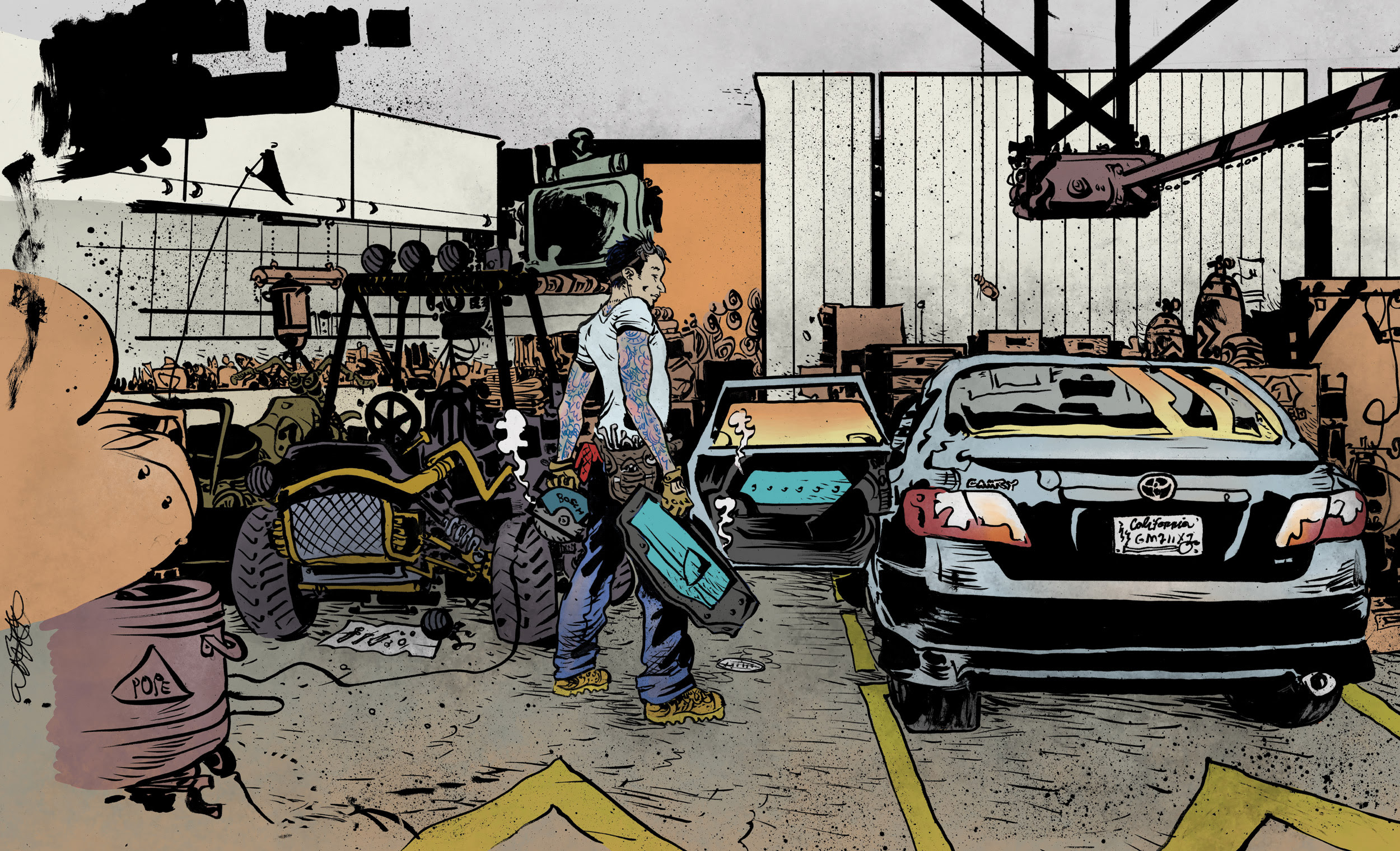 If you understood that last sentence then you may be a geek.   This obsession to 'hide things' is the secret obsession of The Geek (not this one, but in the "generic sense").  Whether it's trap doors, or back-doors to computer programs ....Geeks Do This.

And if you think that you can your moral sense isn't a good guide in how you run your business ... and your life ... then you may be a felon, too.

IGNORANCE OF THE LAW IS NO EXCUSE

A common hacker refrain is that technology is always morally neutral. The culture’s libertarian ethos holds that creators shouldn’t be faulted if someone uses their gadget or hunk of code to cause harm; the people who build things are under no obligation to meddle in the affairs of the adults who consume their wares.
But Alfred Anaya’s case makes clear that the government rejects that permissive worldview. The technically savvy are on notice that they must be very careful about whom they deal with, since calculated ignorance of illegal activity is not an acceptable excuse. But at what point does a failure to be nosy edge into criminal conduct? In light of what happened to Anaya, that question is nearly impossible to answer.