(Actually, I almost blew this off because it's a 24 minute you-tube political video and I hate that  ... stuff.)

But it's a slow night, so I started to watch it just to see what a small-town politico from a rural district (district 2 in Oregon, which includes my home town in Pendleton ... an area larger than a couple of states!) might have to say.

What I FOUND was an impassioned speech which not only addressed Citizens' Rights, but abuses of power on a national level.

Who knew that the local boy could make good?
Representative Walden champions the rule of reasonable logic

Yes, I still detest politicians .. blood-sucking slugs on the testicles of the voters.

But this speech, by this guy?  I'm thinking MAYBE I should move back to Pendleton so I can vote for him.

It has been a long time since I've actually appreciated a politician.

Maybe there's a few of the "keepers" left.

(I'm not going to embed the speech here; Oathkeepers found it, they deserve the traffic.  And no, I'm not a fan of Oathkeepers, but they have performed a valuable service in bringing this issue to the public attention.)

Email ThisBlogThis!Share to TwitterShare to FacebookShare to Pinterest
Labels: Government, Holding Out For A Hero, Private Thoughts

When I AM impressed, I'm full-bore pedal-to-the-metal impressed ....

There’s never been an America, but rather several Americas—each a distinct nation. There are eleven nations today. Each looks at violence, as well as everything else, in its own way.

If you understand the United States as a patchwork of separate nations, each with its own origins and prevailing values, you would hardly expect attitudes toward violence to be uniformly distributed. You would instead be prepared to discover that some parts of the country experience more violence, have a greater tolerance for violent solutions to conflict, and are more protective of the instruments of violence than other parts of the country. That is exactly what the data on violence reveal about the modern United States.


the author has divided the Continental United States into several regions, which exhibit common sociological perspectives. 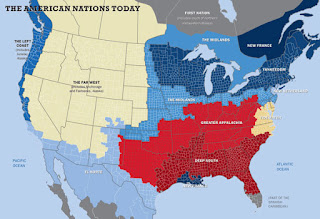 To these regional definitions, the author as suggested meme-like societal priorities (for want of a better word, which I'm sure will occur to me as soon as I hit "PUBLISH").

This is a research project which somewhat parallel's John Lott's research, as it derives data from the county level rather than obey "state line" research parameters:

Most scholarly research on violence has collected data at the state level, rather than the county level (where the boundaries of the eleven nations are delineated). Still, the trends are clear. The same handful of nations show up again and again at the top and the bottom of state-level figures on deadly violence, capital punishment, and promotion of gun ownership.

Perhaps the most striking aspect of this report is that the author doesn't make an effort to stigmatize populations based on their Second Amendment stance.  Instead, he has some information to offer, and he offers it without a minimum of comment (other than to explain what we're looking at).

Oh, go read it all for yourself.

I don't know much about this, except that "They Can"

My friend Matt alerted me to this today. YouTube shut down Hickok45’s YouTube channel for “repeated violations of Google’s Policies”. I do not have any further information regarding this. At this moment there is nothing posted on his Facebook page. Hopefully Hickok45 will figure out what the problem is. I know many of us will jump to the “anti-gun” policies of Google. But let’s not make assumptions until it has been verified by Hickok45 himself. 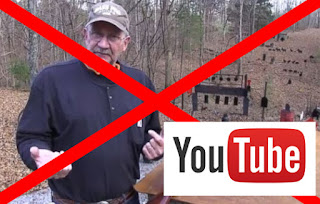 I last watched one of his videos last night; I think it was whether or not a filing cabinet would stop a bullet.

I have no idea why YOUTUBE would cancel his channel, except that they have some kind of political pressure to discontinue hosting firearms-related posts.

I'll go check my own channel

Email ThisBlogThis!Share to TwitterShare to FacebookShare to Pinterest
Labels: IPSC

"The Inquisition Is Strong, Here"

She took them at their word, assumed "Liberal" meant that the college was willing to accept "liberal" view points.

And now they threaten her with either revocation of her tenure, or with a coldly dismissive of removal from her academic position.

Why do I distrust Liberals?
Because they lie.


A professor at a Chicago-area Christian college said Wednesday that administrators were wrong in taking steps to fire her after she asserted that Christians and Muslims worship the same God.
Larycia Hawkins told reporters she met with Wheaton College administrators several times and provided statements explaining her beliefs, which she believes are line up with the college's mission. She said she was initially told further discussion wasn't needed but college officials then changed requirements, saying her tenure would be revoked while she would have to participate in two years of conversations.

Why would this even be an issue at a "Liberal Arts" College?

Oh.  I see it now.  "Evangelical Protestant Christian" and "Liberal Arts" are terms challenged by this situation, and the whole "LIBERAL" thing loses.

Me?  I'm a Conservative ... and judging by the implied definition of the word "LIBERAL", there's not a Liberal bone in my body.
Still .....

Lies "Our Father" Told Us

How doth he lie to us? Let us count the ways… – Gun Nuts Media:

So the president has decided that he’s going to take “executive action” on gun control, and naturally he had to give a big self aggrandizing speech to announce his intentions to the world. It’s impossible for this guy to open his mouth on guns without telling some whoppers, so let’s have some fun and count the ridiculous lies he and his administration are pushing today.

Gun Nuts provides us with a plethora of pedantic presidential postulations (aka: "LIES"), which include:
Maybe it's time to re-run this 2012 parody:

(Alice, in Alice in Wonderland)

The thing is ... Obama's latest and greatest pitfalls for legal gun owners requires us to be what we are not; and if we are not, then we shouldn't be.    But still, we are, and we should. You see?


The Washington Post and Politico reported late last week that one of Obama’s main proposals would require some unlicensed gun dealers to get licenses and conduct background checks on potential buyers. Current law exempts smaller dealers who often operate at gun shows and sell online. Obama, who has been thwarted by the Republican-controlled Congress in his push for tighter gun control legislation, could act through an executive order, which would be immediate and carry the force of law. It would also almost certainly prompt lawsuits by gun advocates claiming the president lacks the authority to change the legal definition of who must obtain a dealer’s license.  (emphasis added)

So, what is "an executive order"?   Can the President impose one arbitrarily, without oversight from the Legislative Branch?

According to the online Legal Dictionary:


Most executive orders are issued under specific statutory authority from Congress and  have the force and effect of law.  Such executive orders usually impose sanctions, determine legal rights, limit agency discretion, and require immediate compliance.   Federal courts consider such orders to be the equivalent of federal statutes.  In addition, regulations that are enacted to carry out these executive orders have the status of law as long as they reasonably relate to the statutory authority.   An administrative action that is carried out under a valid executive order is similar to an agency action that is carried out under a federal statute.  In each case, the agency's authority to enact rules and to issue orders comes from Congress. (emphasis added)

Presidential Executive Orders can NOT be imposed (or "carry the force of law") if Congress does not agree that the context of the Executive order agrees with the content and intent of the  Constitution.

Which is to say that the Presidential Executive Order is NOT LEGAL if it is not "Constitutional".

Now, if Obama's intent is to "... require some unlicensed gun dealers to get licenses and conduct background checks on potential buyers ....", then perhaps he should look at the existing administrative barriers which prevent individuals from qualifying for a 'gun dealer license.
There are many people who would sell a 'large volume' of firearms, but who would not currently qualify for a dealer license.  Is this a "Catch 22"?

And just what constitutes a "Dealer", anyway?  Is the criteria for definition of a "dealer" the volume of business conducted by an individual?  If so, is it the volume in terms of Number Of Firearms Sold Per Anum, or is it the Cash Value of Firearms Transactions Per Anum?

This is a grey area which has been conveniently allowed to endure for decades, by the government; and we can only guess why they have been reluctant to resolve the issue.

Our President seems to require those of us who would sell even a minimal number of firearms (not defined in federal law) to register as "Dealers", but he/they will not define the term for our edification.


Obama will sit down with Cooper at 8 p.m. ET for the event, titled "Guns in America." The event's timing coincides with the fifth anniversary, next Friday, of the shooting of former Rep. Gabrielle Giffords, D-Arizona, in a rampage that left six dead and 13 others wounded. In addition to discussing gun issues with Cooper, Obama will also take questions from the audience on the issue.'

I hope that somebody asks this one question of the President:

Mister President, what do you understand is the meaning of the expression:

Is a Peaceful or at Least Orderly Resolution Possible? | Gates of Vienna:


Posted on January 1, 2016 by Baron Bodissey
Last but not least, I highly recommend against “nation building” or any other military involvement of Western powers in the middle east. I have objected to the wars in Iraq and Afghanistan from the very start, knowing that no one can reform Islamic societies other than Muslims themselves, and that this may take centuries to unfold. Instead I recommend containment. In other words, closing the borders, reducing all interactions with Islamic countries to the bare minimum, and investing resources in finding alternatives to middle eastern oil.


This is an extensive, and detailed summary of the problem of Jihadi's infiltrating Europe (and America).   I recommend reading.
Posted by Jerry The Geek at 1/04/2016 06:56:00 PM 3 comments: