You thought guns were a controversial issue?

Don’t Clean Your Jeans: The Smart Way to Care for Denim - Reviewed.com Laundry:

This 18-month old article sponsored*  article about the proper technique to clean your levis has 774 comments .... the last comments were deleted by the site guardians.

The comments include ad hominem attacks, flame wars, political back-biting and a few of the comments were so naughty that they were deleted by the sponsor.

Email ThisBlogThis!Share to TwitterShare to FacebookShare to Pinterest
Labels: Commentary, Just For Fun 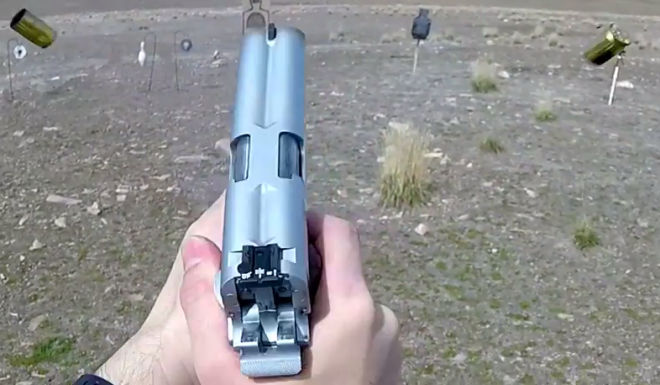 This is a story about a twin-barrell '1911' pistol made by Arsenal Firearms'; apparently "because we can".

Email ThisBlogThis!Share to TwitterShare to FacebookShare to Pinterest
Labels: Bogus, Just For Fun

Who is Grover Norquist?


Americans for Tax Reform President Grover Norquist is reportedly stepping away from NRA board of directors activities amid allegations of ties to radical Muslims.

I'm SO out of date .. I recall Groer Norquest as being one of the very conservative comentors on National Review (online)

Who's he?  I remember him as being the guy who liked to cry on the radio.

There's no crying in Conservatism.


"I have felonies going on daily in Josephine County. That's my priorities."

I'm waiting for a statement from Benton County Sheriff Scott Jackson in response to this email:

Sheriff Jackson,
In response to requiring background checks for firearms sales between private citizens, Sheriff Daniel in Josephine County has reportedly said: "I can't enforce that law, so therefore it won't be enforced".
How do you plan to enforce this new law?


Not that Sheriff Jackson and I are "Good Buddies" as Maynard Krebbs typified his relationship with Dobie Gillis.  The only action I've ever had with the county sheriff is going in to his office every 5 years to renew my CHL.  (They need new cameras ... lately, the pictures make me look old and bald!)

But I can't find any statement on the subject from his office, and I think this is important since we had a town meeting on Open Carry last month.

Raped in Oregon; I need a Blue Light of Security!


I am shocked ... SHOCKED! ... to learn that my elected state representatives voted in a bill which infringes on my constitutional rights.

There are no more private sales of firearms, without the sale being "registered" via a trip to a dealer who will run the transaction through the registration commissars.  (As if felons bought their guns when it's cheaper to steal them.)

This is the work of The Usual Suspects.  May TCHUBLA THE HORRIBLE infest their groins with the fleas of a thousand camels.

I can't even call their offices and threaten to never vote for them again;  I didn't vote for the rascals in the first place.   Hell*, they're probably out tonight having a drink to celebrate their diversity or something.

I feel so helpless, so used, so betrayed.  On the University Campus, they have 'blue lights' on poles, where someone who feels threatened can push a button and a Campus Security Unit (maybe even both guys at the same time) will immediately rush  eventually mosey to their aid.

I need a blue light in the Senate.   Or at least in my home.

*   The lines to TCHUBLA THE HORRIBLE seem to be down at the moment, so you may experience a 'broken link'.  Comcast has reported a "regional outage" in Hell .. AKA OREGON.

Death by Taser - or a reasonable facimile there-of

This wasn't the first time, and it probably won't be the last time:


TULSA, Okla. –  (April 14, 2015)  Prosecutors charged a reserve sheriff's deputy with manslaughter Monday in the death of a man who was fatally shot as he lay on the ground at the officer's feet — a shooting that was certain to raise questions about the use of volunteer officers to supplement full-time police. The sheriff's office has said Robert Bates, a 73-year-old insurance executive who was volunteering on an undercover operation in Tulsa, mistakenly pulled out his handgun instead of his stun gun and shot the suspect as he struggled with deputies.

Tulsa World TV has the incident video released by the police.

No moralizing about privileged rich guys getting to play cop without proven experience or competence.  Everybody else in world will be saying that.

When has this happened before?


We've talked about this before, when other open areas have been closed to shooters for the same declared reasons.

I don't know anything about this range, or the people who use it.  Maybe there are a few Trash Shooters who ruin it for everyone.   The best we can do is, when we go to a place where it's currently "permissable" to shoot ... leave it cleaner than you found it.

Maybe that should be the FIRST thing we do.  Clean the range, and if you have any energy left then do what you went there to do.

10 Lessons I Learned From The Worst Gun I Ever Bought:
*(this is a quote from the cited article ... this is NOT my opinion!)*


The day I turned 21 was one of the most memorable days of my life. Not only for the legal drinks at the local Applebee’s, but for the hour-long trek to a not-so-local gun store to make the most exciting, and ultimately worst, purchase of my life—a Kimber Stainless Ultra Carry chambered in .40SW.

I guess that, in many ways, buying a new gun is something of a crap-shoot, but my one and only experience with a Kimber pistol might have been titled:


"The Best Gun I Ever Bought".

It was 1997, I had been shooting IPSC on and off for over a dozen years, and decided it was time I got rid of that sad Smith and Wesson 659 (decidedly not the best gun I ever bought) and got myself a REAL gun!