History Rewrites: Is this how we will see yesterday ... tomorrow? 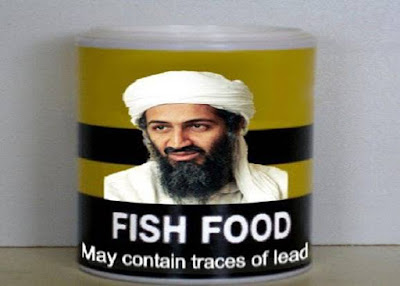 Email ThisBlogThis!Share to TwitterShare to FacebookShare to Pinterest
Labels: 911, Terrorists, War And Remembrance

I went to a gun store today!

That may not be as exciting to you as it is to me, but listen!

It has been a long time since I went to a gun store. All of the local gun stores have gone out of business, and I have to drive 12 miles to find the nearest one.

Okay, so there's one less than ten miles away in Philomath, and I've bought 3 guns from them ... but I've been burned at least one. It was my fault for being gullible, but the rancor still burns. I was looking for my own .22 pistol. I let them talk me into selling a revolver with no finish, double-action but with a hammer-spur, and the only way to eject empty cases was to remove the cylinder and use the cylinder pin to punch the empty brass out ... and I payed them $200 for it!

I hate people who take advantage of me. Worse, I hate having to admit I've been taken! (That was over a year ago, and I haven't fired a round out of the pistol yet; I'm afraid to risk the "Collector Value"!)

Most of those in "that town" (Albany) are "specialty" stores. The single exception is a very small one-man operation with a very classy store and very classy merchandise. Except he's mostly a S&W dealer, and no matter what you walk through his door looking for, before you leave the store he's going to try to sell you a S&W.

One of my ex-co-workers asked me if I knew where he could pick up a .22 pistol. At the time, I was still working so I couldn't go to this store in Albany that I've always wanted to check out, but they're closed on weekends. (WTF?)

But I've since retired, so this afternoon I spend an hour driving to Albany, checking out the store, and driving back without either a gun or a business card.

I show up about 3:30, charge into the store and the owner is standing at his counter with a perplexed look on his face. I say "Hi! I'm looking for a .22 pistol for a friend of mine!"

So he explained that he is closing early today, he had turned the lights out and turned the sign on the door to "CLOSED".

The guy is a nice guy, but his marketing skills need work. He has signs all OVER his shop reading:

NOTICE!
If you are unable to legally possess a firearm, you may NOT enter the premises!
I can't blame him for that, but I would have thought that the sign on the door would have been enough. The sign on the wall facing the door, the sign on the sidewall leading to the counter, and the sign over the counter ... that strikes me as overkill. But it's his shop, and obviously he has a LOT of time on his hands since he's only open 6 hours a day, seems to close early and won't let anyone in his doors on weekends.

Still, he relents when I explain that my mission is to find a .22 pistol for a friend.


He doesn't have a card, but when I ask for one he hands me a flyer. I haven't read it yet.

I turn and begin to leave, and on the way out I notice the display of handguns (mostly S&W) in his display cabinet. "Nice Guns!" I mention. 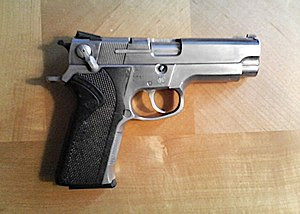 I may have pushed his hot-button; either that, or he woke up and realized he had a customer in his store. Running around his counter he invites me to look at the Forty Caliber S&W. Being a nice person, I decide not to tell him my opinion of the .40 Slow-and-Wimpy cartridge, or how much I love (not!) the flipper/de-cocker mechanism of the S&W Semi-Automatic Pistols. Instead, I say: "Real nice. Looks just like my old Model 659. I gave it to my son."

It is always, ALWAYS a Bad Idea to say anything to a gun dealer which may lead him to believe you are interested. I wasted five minutes listening to his tales of the Mighty Forty, the Wonderful (all steel) 4006, and what a "stopper-cartridge" it was.

Just to impress me, he adds that S&W only made (I don't know, some obscure like "235 of them", and adds: "I have twelve". I think I was suppose to be impressed.


I'm looking around, he's got a steel gun-cabinet (rifle-length floor model, looks like a 5- or 6-gun capacity), also priced at ONLY $895.

Scooting for the door, I make the final mistake of actually listening to his "I See A Customer Heading For The Door" spiel. If I am a 'close' family member of a serving member of the military, he will sell me a special-order firearm without charging me the usual price for "special order" firearms. (Anything that he had on his shelf, of course, was not subject to any kind of discount.)

It took me another five minutes to get out the door. And it struck me, as I as leaving, that there was something peculiarly WRONG with his salesmanship.

The guy had a very classy store front, and obviously is living off his inheritance because I cannot see how a man with a narrow inventory, a narrow mind, closes his shop arbitrarily early and has no people skills ... can stay in business without an extraneous source of income.

The best gun store I even patronized was in Salem about 10 years ago. The owner was a guy whose hobby was trapping. He opened the store to sell trapping supplies. Because that didn't fill many shelves, he also added a 12-point indoor shooting range, rented guns for the range, sold a LOT of reloading components at a competitive price, had an in-store gunsmith, had a very wide range of both new and used firearms (and ammunition, holsters, and other accessories), sold the brass swept up from the range as "once-fired brass" at a reasonable price, and always had at least three salesmen on the floor besides the guy who ran the indoor-range (gun rental) counter.

That store would have been open .. and profitable .. indefinitely, except that one day he became despondant that he wasn't selling any traps, lost interest in the store, and arbitrarily just closed it down. Almost overnight.

I don't know, you don't know, and I'm not completely convinced that the folks who produced this article / "app" really know who or what Seal Team 6 is, either.

But I HAVE read one of Richard Marcinko's books. (He has published over a dozen books, most of them in the "Rogue Warrior" series. Most, if not all of them, are available at Amazon.com.)

And I have at my desk my dog-eared copy of "Lone Survivor: The Eyewitness Account of Operation Redwing and The Lost Heroes of Seal Team 10", by Marcus Luttrell (with Patrick Robinson).

About half of that book addresses the selection and training for SEAL team acceptance. The training and winnowing-out process described there provides some small amount of understanding about what sort of man can call himself a Navy Seal.

And I am very impressed all over again, every time I reread Luttrell's fascinating, dramatic ... saddening account of the extended firefight which lead to the virtual elimination of that select group of warriors.

Getting back to "SEAL TEAM 6"; The Daily has also published an article which it says describes "The Raid". Among other information, the article refutes earlier reports to the effect that "... one of bin Laden's wives was killed ..." during the firefight.

(For further information about the background of involved agencies, read "The Secret Team that Killed bin Laden", from National Journal. H/T Michael Bane; "Who Says Double Taps are Old School?" May 02 2011)

Providing further background information, USA TODAY reported that "Obama laughed at a bin Laden joke" the night before the raid, at the White House Correspondents' Dinner. It's an interesting footnote, demonstrating that this raid ... the planning for which began last February ... had actually been delayed for one day. We can only imaging that this was an odd moment in the President's career, when he was forced by circumstances (and the need to maintain operational security) to publically dissemble in reaction to the joke about bin Laden hosting "... a daily program on CSPAN between Four and Five (pm) ..."

We must remember to give President Osama Obama credit for his great leadership: he has proven once again that he can dissemble with the best of them.

FROM ONE DEAD MAN TO ANOTHER:

Are you ready, hey, are you ready for this
Are you hangin' on the edge of your seat
Out of the doorway the bullets rip
To the sound of the beat - yeah


AND ... Apparently Rush Limbough isn't the only 'talker' who can't keep track of the difference between "Osama" and "Obama" when discussing the political assassination

Obama: Al-Qaida head bin Laden dead | General Headlines | Comcast.net: "WASHINGTON — Osama bin Laden, the glowering mastermind behind the Sept. 11, 2001, terror attacks that killed thousands of Americans, was slain in his luxury hideout in Pakistan early Monday in a firefight with U.S. forces, ending a manhunt that spanned a frustrating decade.

'Justice has been done,' President Barack Obama said in a dramatic announcement at the White House.

A jubilant crowd of thousands gathered outside the White House as word spread of bin Laden's death. Hundreds more sang and waved American flags at Ground Zero in New York — where the twin towers that once stood as symbols of American economic power were brought down by bin Laden's hijackers 10 years ago."
Posted by Jerry The Geek at 5/02/2011 02:58:00 AM No comments: