Well, that didn't work out as we expected

Port Arthur, 20 years on: Australia has more guns than ever:

From the late 1970s, gun deaths in Australia have trended downwards. The risk of an Australian dying by gunshot remains less than half what it was before Port Arthur. But firearm fatalities have not disappeared. There were 200 gun deaths last year. Around 80 per cent were not a crime, but suicides and accidental deaths.

As for the criminal element, it goes beyond homicide. Gangs, bikies and drug rings typically use handguns for protection and the most common weapon used in attempted murder in 2014 was a firearm. “Most gun homicides are committed by people who know each other well,” said Prof Alpers. “Stranger danger is a lower risk than people realise. “The majority of gun owners are law-abiding people who need them as legitimate tools. As with terrorism, you have to legislate for the minority.” One of the biggest effects of the amnesty, according to Prof Alpers, is that semi-automatic weapons — rapid-fire rifles and shotguns — have been replaced with single-shot firearms ...

They can't take 'em away fast enough in California

An additional $24 million that was supposed to end the backlog in a unique California firearms seizure program has reduced the waitlist only about 40 percent, according to a report released Monday.
That leaves a backlog of nearly 13,000 gun owners who bought firearms legally but were later convicted of a felony or a violent misdemeanor, became subject to a domestic violence restraining order or were determined to be mentally unstable.
Officials said the extra money in 2013 would let Attorney General Kamala Harris' office end a backlog of nearly 21,000 people within three years. The remaining backlog of nearly 12,700 gun owners is the lowest it's been since 2008, Harris said. The report she released Monday cites recent expansions of the state's gun control laws for the continued backlog.


This in a state which already has among the strongest anti-gun laws in the nation.

And they still say they don't want to take your guns away ... but {sigh} they just gotta ... they can even do so without giving your a day in court to defend your civil rights.


President Obama wants to put gun dealers out of business. When he was a state senator in Illinois, he supported a ban on the sale of handguns and all semi-automatic guns as well as a ban on selling guns within five miles of a school or a park.  While the president obviously can’t just ban them, he can use regulations to make their lives more difficult. For some dealers it may be a slow death of a thousand regulatory cuts ...

The increasing "cost of doing business" for firearms retailers has caused a lot of problems in 'the business' for the past several years.

In my small town, I've seen the number of firearms dealers go from three, to one, to none in the past 15 years.  It's not just Obama'; it's the increasingly more critical climate of firearms ownership.
Which has been championed by  (you saw this coming, didn't you?) The Democratic Party.

Never was there a party with less joy (except for the hosts) in this College Town.

This is a Democratic State.  Every elected official, from the Mayor through the County Commissioners to the Senators and the Governor are Democrats.  And they're all just fine with the current trend.

The electorate is quite happy with the current state of political influence.  Well, we have three or four main population centers, and these 'big cities' have a lot of people on Welfare and other versions of the Political Dole, so one might say that the party has bought the electorate.

Not the People; just the Electorate.

Surprisingly, 90% of the people outside of the few 'big cities' .... and we're talking about people who control 90% of the land ... are more conservative.

If my poor state is any indication, then ... yes, Obama HAS the support to regulate guns out of existance.

The Hoi Polloi will not object.  They will still receive their monthly stipend (provided by the small percent who actually pay taxes, bolstered by Corporations who provide the bulk of tax income to The State).

I may have exagerated; it may not be 90% who are on the dole; a significant percentage of the working populace are employed by governmental agencies (as I was for 30 years), but the labor unions have ways of dealing with malcontents.

Still ... I can find a gun dealer within an hour's drive from my home, but he only has a very limited stock.  (He's something of a 'special order" shop.)
I can't find a gunsmith nearby unless I go to the jack-leg guy who isn't really professionally trained, but he can install a sight or a new barrel and probably even detail-strip a 1911 and put it back together 'right'.

Why can't I find gun guys?
I'm not blaming Obama.  The truth is, the demand for firearms support industries has diminished to the point where folks would rather just do without a broken gun than try to find someone to fix it for them.

That's not universally true, but it's true enough to be significant.  There isn't enough business in gun maintenance here to support anyone in a 'full time job'.   New shooters are few and far between.  They are out there, and I meet a lot of them teaching my "Introduction to USPSA" class.  But when their guns go south (as they will),  I have no evidence that they are willing to get them fixed.  Nobody has asked me for a reference to a "gunsmith" for 15 years.

Whatever Obama is doing, he's good at that part, at least. I wish he was as presidential as he is obstructionist.

How is this possible, in oh-so-proudly-gun-free England?


A detective has been sacked over his failed investigation into an associate of Mark Duggan, whose shooting by police sparked riots in August 2011. The probe centred on Mr Duggan's associate, Kevin Hutchinson-Foster, who beat a man with a gun in east London. Six days after the attack he gave the same gun to Mr Duggan, who was shot 15 minutes later by armed police. The police watchdog found errors in how an officer, named only as DC Faulkner, conducted the initial investigation. The officer was dismissed without notice. Mr Duggan, 29, was shot by police in Tottenham, north London, on 4 August 2011.

Hillary is 'violently' against guns; it says so here!   (click image for full-size view) 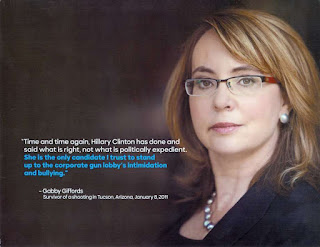 In one Clinton commercial, the daughter of slain Sandy Hook principal Dawn Hochsprung speaks of the “giant hole” left in her life by the murder of her mother. The daughter, Erica Smegielski, goes on to say that Clinton reminds her of her mother.


It isn't the guns; it's the votes.
By campaigning against guns in the primary, Hillary gains a disproportionate share  of delegate votes in states where anti-gun bias is important.


Clarity Campaign Labs, a data strategy group that works primarily for Democrats but is not affiliated with either presidential campaign, has developed a model that assigns voters a score, out of 100, indicating their propensity to support gun control. The higher the number, the more likely the voter favors strong restrictions on firearms. According to John Hagner, a partner at the firm, in the upcoming primaries "the kind of Democrats who agree with Hillary on guns tend to live in areas that have the most delegates."

In Pennsylvania, surveys have put Clinton on pace to win again, even as her statements on gun policy stand in stark contrast with her 2008 positions. The Clinton of 2016 may alienate gun-owning Democrats in rural central Pennsylvania, but that swath of the state also offers the fewest delegates. By contrast, in Pennsylvania's second congressional district, which includes most of Philadelphia and awards seven Democratic delegates—more than any other district in the state—Clarity calculates a gun violence prevention score of 74.5. And the second district is surrounded by other delegate-rich districts with similarly high propensities to back gun reform. The pattern holds throughout the states that will vote over the next two weeks.


Of course Hillary hasn't always held exactly the same opinions; in this interview from October in 2015, The HillaBeast had a softer view:


Two students have been injured in northern Wisconsin after a person armed with a rifle opened fire at Antigo High School, officials say. The suspected gunman, [name withheld], who was immediately shot by a nearby police officer, has died, according to Langlade County Coroner Larry Shadick.

We'll be hearing a lot about [name withheld] in the days and weeks to come.   He'll be described as "not popular", or even "a loner".   He couldn't get a date to the prom.   He was not a good student.

The Gun Control crowd will rush to get "FIRST!" honors to ask "Where did he get the gun?" and "Why wasn't he diagnosed as mentally deficient" (pick your own favorite issue) and demand new levels of gun control.

The president will come on television and weep crocodile tears, while all the time feeling vindicated for his new Presidential Findings that "we have to do something" about Gun Violence..

Hillary and Bernie will vie to be "FIRST" to decry the rising levels of Gun Violence.

Because "never let a crisis go to waste".

But nobody will expect an answer as to why a kid will shoot up his prom.

It's not about "Gun Violence", so no new laws which 'they' might suggest will ever curb the trend.  It's not about guns, it's about ... what's the word?