NRA, Republican Politicians, White Blood Guilt and Letters to the Editor of the SLC Tribune

Letter: Even with sensible gun laws, it would take centuries to undo the crazy - The Salt Lake Tribune:


For over a decade now the NRA and Republicans who are financially obligated to them have waged a campaign of aggressive pro-gun activism. They have convinced the public that gun ownership is essential to survival. These Republican policies have come to fruition. The chest-thumping, white Americans proclaiming the most important thing to them is their gun have set the new norm of our Republican-run America, a mass shooting every month. The NRA, Republican politicians and all those white voters will have to own this bloodshed.

Actually, the Republicans are not all that "financially obligated" to the NRA.


... an examination of the NRA's actual lobbying and political contributions reveals it is a relatively light spender compared to other corporations, interest groups and industries.


For example, the NRA spent roughly half of what the dairy industry spent last year on lobbying, according to the Center for Responsive Politics.

Don't take my word for it; go look it up!

And by the way, where does all that money come from, which " ... financially (obligates) ... the evil REPUBLICANS to the whims of the even-more-evil NRA?

Some of it comes from the $50 a year membership fees for the (reportedly) five million members of the association.

But some of it comes from corporate sponsors:


Companies often donate money to the NRA to protect our RTKBA. But is the NRA just taking orders from all gun companies? No, the NRA takes orders from the members of the association; the guys and gals who love guns and want to keep their rights. If any group is a “shill” for the firearm and ammunition companies, it would the NSSF, but even that is a stretch. The National Shooting Sports Foundation is the trade organization that represents all of the companies that make up the shooting sports. Their job is to protect and defend shooting industry companies and rights. However, in this industry, the views of the NRA and the NSSF almost always are directly tied if not the same. “What’s good for the goose is good for the gander,” the old saying goes, and what is good for the gun owner is good for the gun industry.

Of course, none of this information will ever filter back to the writer of the letter to the editor of the Salt Lake Tribune. ( Theresa Roberts), but that doesn't matter.  Even if she got the information, she wouldn't believe it. Her mind is made up, and she cares not for the facts.

Because Theresa is a bigot.    She knows what she knows, and she doesn't like what she doesn't like.
Facts are something of a stumbling block for her, so she not only ignores them, she doesn't even bother to do the five minutes of online research it took me to find these references (although I'm not sure she wouldn't take a glance at the Washington Examiner article).
Oh, and here's another factoid which you can take for a lie:

Dec 5, 2015 - "Just what will it take for Congress to overcome the intimidation of the gun lobby and do something as sensible as making sure people on the terrorist watch ... Blue Cross Blue Shield, a major health insurance company, poured more than six times as much money into lobbying as did the NRA last year by ... (see below the fold)

Email ThisBlogThis!Share to TwitterShare to FacebookShare to Pinterest
Labels: NRA

I'm appalled to learn that a WWII "Liberator" pistol was "surrendered" in England. 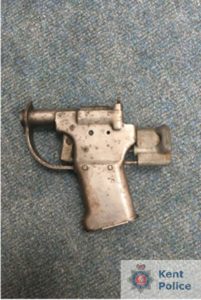 During WWII, thousands of these pistols were air-dropped in England and Nazi-occupied Europe, where the citizens were helpless to resist the German invaders.

There was also a program in which Americans voluntarily donated their private firearms to be sent to England, to help the Brits resist the expected Nazi invasion.  (Never got any of them back, either!)

Once, Winston Churchill declared "We will fight them on the beaches ..."

Once, the Brits proudly proclaimed that "The Sun Never sets on the British Empire!"

Today there is no British Empire and no British "pluck".    The sun has set.

It's sad, but perhaps inevitable, that men get old and "can't get it up anymore".
It's even worse when an entire culture deteriorates so pitifully.


The first national firearms surrender in England and Wales in years has produced a treasure trove of antique weapons to include a famous WWII-era “gun to get a gun.”
The two-week amnesty, coordinated by the National Ballistics Intelligence Service, allowed gun owners to turn in firearms, ammunition and gun-like items to police without
fear of penalties or punishment. One of the more interesting items coughed up was an FP-45 Liberator pistol handed in at the Folkestone police station last week as reported by Kent Police.

Email ThisBlogThis!Share to TwitterShare to FacebookShare to Pinterest
Labels: Brits, War And Remembrance

The jobs that Americans won't do ....

I did harvest "stoop labor" during the summers while I was in high school.  These were the only jobs I could get.

Buddy ... this is not really something I want to do.


Some people are claiming illegal immigrants are stealing the jobs from Americans. But Alyona asks, during this recession when unemployment is high, would Americans really want to do those jobs? RT Producer Ramon Galindo explains if Americans would want to do these jobs and says that only three people took the offer from 'Take Our Jobs Campaign.'

A mother's grief at the loss of a child is boundless, unendurable, and understandable.

After her unimaginable loss, Fulton discovered some relief when she reached out to other moms who have lost children to gun violence. Now, she plans annual peace walks in her home state of Florida, works with legislators on gun violence laws and travels around the country speaking at colleges and churches about preventing senseless shootings.


Sybrina Fulton’s life as she knew it ended on February 26, 2012. That’s when her 17-year-old son, Trayvon Martin, who was unarmed, was fatally shot in Sanford, Florida, by a neighborhood-watch volunteer for his gated community.

Zimmerman testified he was flat on his back; Martin,  straddling his supine body, beat him with closed fists.
So, George Zimmerman should have just laid there and taken the beating?


March 8, 2012 - Investigators receive a fax from the Altamonte Family Practice containing the medical records identifying the injuries sustained by Zimmerman on the night of the shooting: Open wound of scalp, without mention of complication; nasal bones, closed fracture; assault by other specified means.
March 12, 2012 - Sanford Police Chief Bill Lee says that Zimmerman has not been charged because there are no grounds to disprove his story of the events.

We will never know the full truth of the story, but Zimmerman's wounds suggest that his version of the story has some validity; that he was helpless, under physical assault, and unable to overcome his assailant.

April 30, 2013 - George Zimmerman waives his right to a "stand your ground" pretrial immunity hearing. Zimmerman's attorneys decide they will instead try this as a self-defense case. If Zimmerman had had a pretrial immunity hearing, a judge would have ruled whether his actions were protected under the "stand your ground" law. If the judge had ruled in favor of Zimmerman, it would have meant that no criminal or civil trial could proceed.

Counting the story as an example of "Firearms Violence" is stretching the interpretation a bit.

The violence was initiated by Martin.  He was in control of the situation, and chose to continue beating Zimmerman ... who was helpless to defend himself against the younger, stronger aggressor.

Except that he carried a weapon, and used it.

(NOTE: Zimmerman refused to take a "stand your ground" defense)

This is "Gun Violence"?   Or is it using a weapon as the last method of defense against an aggressor?

What A fascinating concept: one of the great Cinema Directors of our culture offers a class where you and I have the opportunity to determine for ourselves whether we have the imagination, the skill, the talent and the leadership to actually become the director of a great movie.

It's probably never going to work for me; but would it work for you?

I Had Never Touched a Gun . Then I Bought One.

Fascinating article for a self-professed "Snowflake", examining the angst and trauma of an gun-control proponent.

The author walks us through the trials and tribulations of buying, and becoming familiar with, a handgun in the wilds of Seattle.

I Had Never Touched a Gun Before the Las Vegas Massacre. Then I Bought One. - Features - The Stranger:

A liberal snowflake gets to know gun culture from the inside.

The author walks us through every detail of his decision to 'find out' what the attraction of firearms might be.   And during the trip, he pays much attention to detailing how upsetting ... yet fascinating ... the journey has been.

As I read through the article (excellent written, atypically "fair and balanced" as they say", I began to wonder about his motivation.  If he finds guns so fearful, why did do this.    True, it's a fine example of expository skills; and though it's rather long, it's not a waste of time and I hope he received a fat check for his efforts.

But still .. he harps on the fear he felt.   Why the fear?   Was there something special which made the 'experiment' particularly dreadful for him?

Then toward the end of the article, *under the header "TRIGGER WARNING"* he provides full exposure:

He has a suicidal tendency which he has fought years; he controls it by medication.


There Are Some People Who Simply Should Not Have A Gun

I have made this point in my writings over the past ten years here.   To my mind the sorts of people who should not have a gun include:


There is obviously some overlap in these three major categories, plus sub-categories not defined here.

But a person who is admittedly suicidal, and who requires medication to control suicidal urges, is certainly playing a life-and-death game with himself.   This author qualifies in the second and third categories, although he makes a stringent effort to describe why he shouldn't be included in the second (and lacking a felony conviction, he has not qualified for the first category).

Although I admired his work, and still have my copy of "Hunting with Hemingway", I lost my respect for Ernest Hemingway when he took his own life.

And you, sir, are no Hemingway.

Please follow up with your better judgement, and remove that damn Glock from your life, rather than to remove your life with the Glock.