Schools Pervert the Constitution to teach their OWN version

Middle School Assignment: Second Amendment Requires Gun Registration Alex Jones' Infowars: There's a war on for your mind!
"People have the right to certain weapons… providing that they register them"

A workbook handed out to seventh grade students in Springfield, Ill., states that all Americans must register their firearms in order to have a Second Amendment right.

“This amendment states that people have the right to certain weapons, providing that they register them and they have not been in prison,” the workbook states.

Along with an open ended statement regarding the right to “certain weapons,”  the assignment also excludes mention that Americans have the right to “keep” and bear arms.

The parent, speaking on the condition of anonymity, confirmed the assignment to Storyleak and detailed their child’s initial reaction.

“My son was given a workbook at school that is a compilation of the Constitution and the Bill of Rights. When they covered the 2nd Amendment, he saw that they were stating that only ‘certain guns’ could be owned and that they had to be ‘registered,’ which he knew was false,” the parent said. “He bought this to my attention as he felt it was wrong to teach these things that aren’t true. I’m extremely proud of my son for his actions.”


California Democratic Sen. Dianne Feinstein is circulating a letter on Capitol Hill calling once again for a ban on semi-automatic rifles and asking for President Barack Obama to keep his State of the Union promise to make 2014 a “year of action.”

Citing the Gun Control Act of 1968, Feinstein states, “In recent years… importers of firearms have taken advantage of ATF’s interpretation of the ‘sporting purposes’ test to evade the import ban.”


It's significant that one of the primary reasons she continues her objection the 'acceptance of firearms with certain characteristics' is that:

Many semiautomatic firearms on the market today do not have a military origin but are modeled closely after military firearms.

I personally find it interesting that "Ol' Lady Di" is cleaving to her prayers and her gun-controls.  Specifically ... citing the 1968 Gun Control Act? [Hereafter: 68GCA]   Apparently she has (conveniently) forgotten that the law had passed on the basis that it would reduce gun violence, and a "Sunset Provision" was forced by the Conservative members of Congress.   The effect of that provision was that, if after ten years, the law could not be shown to achieve the goals which its promoters had promised,it would be rescinded.

In 1978, the CDC (one of the most vocal supporters of the law) admitted that, by it's own data gathering, the statistics could not support the efficacy of the law.   And so, it was rescinded.

Today 68GCA remains a good example of what happens when politicians shoot themselves in the foot, and The People Bleed For Them.

INSANITY: doing the same thing over and over again, and expecting different results.

Courtesy of "The Gun Wire", my newest addition to my "Read Every Day" list.


Here's the full video on the "GUN WIRE" video page.

Taliban ... "Still Crazy, After All These Years"


Four young Taliban gunmen died Thursday night in a shootout with Afghan security forces hours after they slipped into a luxury hotel popular with Westerners in central Kabul and fired on guests during a new year's celebration, officials reported.

Sources told NBC News that the nine guests were killed execution-style, including five women and two children. That claim could not immediately be verified.

Interior Ministry spokesman Sidiq Siddiqi said the four gunmen hid three hours in bathrooms at the Serena Hotel during a celebration of Nowruz, the Afghan and Persian new year marking the spring equinox.

He said the attackers, who appeared to be about 18 years old, had concealed pistols in their socks and slipped into the heavily guarded five-star hotel about 6 p.m. by claiming they were there for a special buffet. About 9:15 p.m., when the dining room would have been packed, the attackers emerged and fired at diners.

I don't know how anyone can claim that their religion mandates such a senseless slaughter of innocents.

I do know that in America there is at least one Baptist sects *(Westboro)* which goes around to the funeral of American servicemen and praise their deaths.  They are entitled to their opinion, although it causes much grief to the families of the dead.    Still ... they don't kill people!

That may be the defining difference between American religious extremists, and the Eastern Brand of religious extremists.  I can't say that I find any personal affinity between my personal religious beliefs and either of these, but I can say that any religious conviction which deliberately causes harm/grief/death to other people is not one which I can accept.

Who ARE these people?  And why are they so filled with hate?  Both the Baptist and the Muslim faith claim to be the Religion of Peace.

I doubt them all.

High school senior jailed, kicked out of school and may lose Army dream because of pocket knife in car | Fox News:
(March 18, 2014)


An Ohio high school student has already been jailed and kicked out of school for having a pocket knife in his car, and now he fears he could lose his dream of serving in the Army. Jordan Wiser, a student at Ashtabula County Technical School in Jefferson, is finishing up his senior year from home after school officials searched his car in December and found the folding knife and an Airsoft gun. School officials called police, who charged him with illegal conveyance of a weapon onto a school ground based on the three-inch knife.

I love Zero Tolerance Rules, don't you?   They're so charmingly ... all-inclusive!

Remember Switch-Blade Knifes?  Back in the Fantastic Fifties and the Sexy Sixties, even Russ Tamblyn had one! 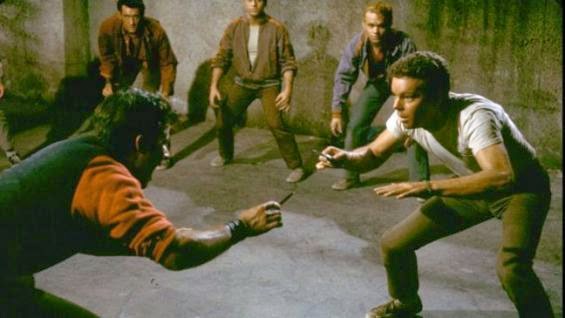 Even I had one.  Well, not a switchblade. Just a little pocket-knife that I carried because .. well, every boy did.  (I mainly used my pocket knife for cleaning the crud under my fingernails, and sharpening my quill pen in school.)

Today, students use G2 flow-tip pens and never never carry a knife.  After all, nobody has to skin a squirrel for dinner hardly ever anymore.

The thing is ... the knife in THIS story was  " ... part of his first responder's kit and can be used for slicing an accident victim's seatbelt, [and] was found tucked inside his EMT medical vest in the trunk of the car."

Doesn't sound like a reasonable placement if you expect to use your knife in a fight on the schoolgrounds.

In fact, the school didn't even try to make noises about it being an offensive weapon.   That's the really neat thing about Zero Tolerance.  It doesn't have to make sense, it's just what it is, and the Zero Tolerance rules can be applied freely without any expectations that it might meet conditions of reasonability.

School Administrators are like Politicians; what they do doesn't have to make sense, as long as they demonstrate the appearance of  "doing something".  (Hmmm .. sounds like Gun Control laws, doesn't it?)

You have to wonder, when school administrators shy from judgement calls, exactly what lessons they are teaching our children and grandchildren.

That's a LOT easier to teach than "Reading, 'Riting and 'Rithmatic.


Don't we pay these people enough, to attract intelligent people?  Or, do we pay them too much?

According to "Bizpac Review":


The school administrators, who justified their car search based on rules in the handbook, found the knife, called the police, and refused the teenager the right to call an attorney, according to Wiser. Arrested and placed in jail, a judge ordered a psychological test and a half a million bond, and when the youngster passed that, another judge reduced bail to $50,000. But he conditioned that on an ankle monitor and the removal of any guns in the home to his grandfather’s house.

“The next judge freaked out about me even knowing what a gun is and put a no-contact order against me and my grandparents. My grandfather is dying right now and I can’t get within 500 feet of him,” Wiser related.

Ironically, at his rural Ohio school, kids get caught with pocket knives all the time Wiser told The Post, but they’re only suspended. Thus, a petition that sprang up afterwards calling for a reduction of charges to a misdemeanor garnered a quick 1,349 signatures and inflamed Harold Specht, Chief Assistant Prosecutor for Ashtabula County.

We will be following up on this story.  Personally, I'm curious about what laws in Ohio makes it a felony for a teenager to carry a knife (either 3" or 4" blade ... reports vary) in his personal automobile ... and what arbitrary school rules obviate Constitutional rules against Search and Seizure in a Felony prosecution?

Never mind the question about "knives" vs "guns".


The controversial Supreme Court ruling that expanded eminent domain to give government the right to take private property to allow economic development may have been all for nothing, according to a report.

Nine years after the high court sided with a Connecticut municipality in Kelo v. City of New London, a ruling Associate Justice Antonin Scalia has likened to the court's disastrous Dred Scott decision, the 90-acre plot once earmarked for office buildings, luxury apartments and a new marina, remains vacant.

Seven residents who fought all the way to the Supreme Court to keep their working-class homes in the city's Fort Trumbull section have only their memories and whatever remains of the money they were forced to accept.

We commented about this back in 2005 (can't find the link, sorry) when we thought that the Fifth Amendment might possibly apply.   Yes, we agreed with the minority opinion of Judge Scalia.  Sure, we said at the time, "Eminent Domain" allows The State to condemn property which stands in the way of --- say --- an Interstate Freeway; but "luxury apartments"?   The point was, this was not a "Depressed Area" (read: "slum").  It was a pleasant residential neighborhood, and some of the residents were second or third generation owners of the same private residence.

Today, we learn that these people were moved out of their homes for nothing.  Or, in the cited case of Lead Plaintiff Suzette Kelo, they liked their homes so much that they opted to use the (inadequate) compensation paid them to move their houses to another neighborhood.

The Supreme Court (Judicial Branch) is one of the three 'legs' of the "Balance of Powers" under the U.S. Constitution.  Unfortunately, it is staffed by fallible humans,  as are the Legislative and Executive branches.  As such they are subject making terrible decisions, which will come back to embarass them in years to come.

Today, it's the Judicial Branch wearing red faces to compliment their Black robes.

Sucks to be them, today.