Try Shotgunning shoot down an airplane?

The Smallest Minority: THIS Might Make Me Want to Try Shotgunning

I'd go to that kind of a shoot even though I doubt I could "do well" with it.

Email ThisBlogThis!Share to TwitterShare to FacebookShare to Pinterest
Labels: shotgun

Truth in the Blogosphere?

This is sort of off-topic, in this venue.

I happen to subscribe to PJTV (www.pjtv.com) which presents conservative political viewpoints on the current American political scene.

Last month I noticed that two of my favorite commentators .... Sonya Schmidt and Andrew Klaven, who present their opinions and observation with good humor (if a little ascerbic) ... were no longer currently presenting (Mr. Klaven) as individuals, or not presenting at ALL (ms. Schmidt who no longer even appears on the blogroll, so her archives are not available, either).

So I sent a question to PJTV's Help Room.

I asked them to explain why these two excellent commentators were no longer presenting.

In the space of a few minutes, I received the following candid reply:

Nature of Request: Website:Other
Brief Description: So what happened to Sonya Schmidt?
I can't


Thank you for your interest and taking your time to contact Pajamas TV. Should further action be required our Support staff will respond, via email, within the next 24 - 48 hours.

Once again, thank you for contacting PJTV.


I'm thinking there's a story behind this. But as long as their HELP ROOM people are still honest, I'll probably continue my $5/month subscription to PJTV, "anyway".

Today was suppose to be the day I loaded 10mm in preparation to a match at Dundee.

Unfortunately, I got hit by the Stomach Flu this morning. I know that's not much of an excuse, but I'm out of Large Primers. I don't dare get that far away from the house to go buy any.

The reason why the match was so important to me is that I was hoping to catch up with my old friend "Randomly Hitten' Witten". Randy and Sandie and I use to squad together a lot, but he gave up USPSA for shotgunning and other shooting sports so we haven't seen much of him lately. We enjoyed visiting with him and Donna when The Usual Suspects gathered at their house once or twice a year for barbeque and BS. We haven't done that since the birth of my second grandchild .... I now have seven of them.

Catch up is important though. I may just go up with the ammo that I have, shoot until I run dry, then stand around and take pictures the rest of the day.

I know, nothing anybody wanted to hear.

Still, I was hoping I could find the photo of Randomly Hitten' when he completely destroyed a disappearing target by splitting it ... edge on, several time. It was his proudest moment.
Posted by Jerry The Geek at 2/22/2012 10:51:00 PM No comments:

Notes From The Squid 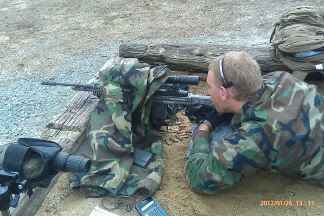 I got a phone call from my son today.

If you haven't heard me rave about My Son The Squid, he's in the Navy. He's a "Master At Arms", whichapparently is kind of like a military cop, except it's a Military Occupational Specialty whose member duties include instant "police" reaction to terrorist attacks and otherwise guarding naval installations and ships.

I don't know all the details, but I do know that he has had some really exciting training, including automobile evasive maneuvers and just recently, Sniper School at some place near D.C.

Anyway, he's through with that part, and now he's doing some kind of qualification testing. I was impressed by the very high standards. 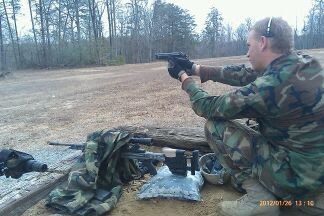 On the surface, the trial is very simple. For Level 1 (or Category 1 .. I admit I didn't listen as carefully as I should have), they have to start standing with hands above the waist, draw their pistol (a Beretta 92 ... the crappiest trigger-pull in the world!) and hit an 8" plate at seven yards within 1.9 seconds.

(The old standard was to hit the plate in that time frame at 3 yards.)

I can't do that reliably. It's all I can do to hit an IPSC Metric target ... anywhere ... at that range and in that time. I've been shooting competitively for over 25 years; if he can do it he's a much better gun-handler than I am.

There are levels (or categories) of qualification. For Category 4 certification, they have to hit the plate within 1.3 seconds.

I've teased "The Kid" about his Navy training for years, but now I'm beginning to think that he's really getting the martial training he needs to do his job. He's going for Category 4 certification. I think he might just make up.

For sure, if he does, nobody's going to steal the San Diego Naval base or Coronado while he's on the job!