I coulda tolja so .. but you wouldn't listen

A 22-year-old Milwaukee man accidentally shot himself in the femoral artery around 11:00 PM Friday evening while attempting to reholster a pistol. Despite the best efforts of the local hospital trauma units, Timothy Phonisay did not survive his wounds.

The problem with "Appendix Carry" is that the shot heard around your apartment isn't going into your foot; it's going into the parts you love the best.

You know what the warnings are, I won't repeat them.

Except:  DO NOT DO THAT SHIT!

Why are you trying the oh-so-chic carry method, anyway?

Is it to keep the bad guys from shooting you?  And what does it gain you, if you shoot yourself?

Geez .. the bad guys might have given you a "Flesh Wound".  But guess what?  These are the worst kind of wounds: the soft tissue, the blood-carrying tissue; the kind that kill you..

We should learn something from this.

But we probably won't.

The Qualities Demanded of an Infantry Officer

The Army Looks to the Future | RealClearDefense:

Army organizations must be led by the highest caliber of officer. Ideal officers should always take the initiative and be capable of daring feats due to high self-confidence and a creative imagination. Their physical and moral courage must be unquestionable and they need a physical stamina that is equal to their mental flexibility. Leadership is the most important element in the Army and we have been blessed to continue to find excellent combat capable leaders because of our great education system.

I read this article with great interest, because it reflected lessons I had learned during my own limited military experience:

Email ThisBlogThis!Share to TwitterShare to FacebookShare to Pinterest
Labels: vietnam, War And Remembrance

How much does it cost to Buy Oregon?

It was the Michael Bloomberg-funded Everytown for Gun Safety Action Fund that spent $764,232.35 in the reporting period covered, eclipsing even the Oregon teachers lobbying arm by $484,055.

So to beat the Republicans, you have to sway the independents and non-affiliated voters .. and only 10,000 Democrats.


Assuming (and these are gross assumptions) that the Independents and Unaffiliated split on this vote,
and that Dems and Reps split along party lines.. then the price of a Democratic vote is less than One Dollar American.

This is, of course, a bizarre assumption.  The dems are 90% anti-gun (cleave to the party line) but there are some registered Dems who have a slight tinge of blue.  So it may not be too magnanimous to say that you couldn't buy a Democratic vote in Geekistan for LESS THAN $1.00.

The Democratic votes are already 'a sure thing'.  The cost of a Democrat's vote?  FREE!  Just pat them on the head and tell them what good boys and girls they are, and you can spend the rest of your three-quarters of a million dollars trying to persuade the 'Independents",  :Unaffiliated" voters.

Which, combined into a group, come MUCH more dearly than a Democrat.  And these people RULE Oregon!  (See below)

With a population of about 680,000, some 83 percent of which is African-American, Detroit's growing embrace of Second Amendment rights has a racial component that is not unique to the city. According to a recent survey from Pew Research Center, 54 percent of African-American residents nationwide now see legal gun ownership as more likely to protect people than to put their safety at risk. That figure was up from 29 percent two years ago.
“If anyone should have the right or need to carry a gun, it should be the African-American community,” Philip Smith, founder of the National African American Gun Association, told Reuters.

Responding to encouragement by Detroit Police Chief James Craig,  Detroit Denizens are applying for .. and getting ... licenses to carry concealed handguns.

It's almost as if someone is actually listening to the NRA, and discovered that time-worn bromide is exactly the right solution to the awful problem of unbridled violence: a good man (or men, or good women) with a gun.

America has come a long way since the Jim Crow laws, and it hasn't been easy.   The first thing was to understand and accept that the whole race thing was a non starter, and get the most qualified candidates into the right job..


Maybe that's what happened to Detroit.  And Chief James Craig may be part of the answer. 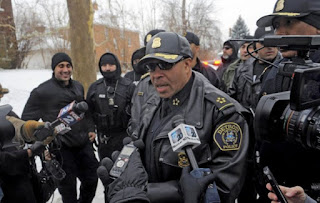 Whatever it takes, Craig has been encouraging the citizens of the near-bankrupt Motor City to assume responsibility for their own safety.   How?  By applying for permits to carry concealed weapons, and seeing to it that they get the needed training to be effective.

The city finds it hard to maintain as many police officers as it needs, so Craig has been working to get his fellow citizens to take some responsibility for their own safety ... Not least because the overburdened department cannot guarantee a rapid response to a call for help.

You won't find Craig on Wikipedia, but you'll find him in Detroit, making the tough decisions.


“It’s been a bad year,” Sean Connery’s character says in “The Wind and the Lion.” “The next one will probably be worse.” The Brady Campaign’s Legal Action Project might as well say the same, as the group’s attempts to legally destroy legitimate gun manufacturers and dealers have met repeated defeats that were capped, this June, by a blow that threatens to destroy the Project’s very existence.

CHATHAM(CBS) – There have been plenty of shark sightings off the Massachusetts coast this summer, but none quite like this. Dr. Greg Skomal of the Massachusetts Division of Marine Fisheries was working with the Atlantic White Shark Conservancy off Monomoy, Cape Cod Monday when a great white shark jumped out of the water trying to grab a seal. It appears the seal escaped.


Oh, go look at the pictures!

Email ThisBlogThis!Share to TwitterShare to FacebookShare to Pinterest
Labels: Blogmeat, Just For Fun

This week, NSSF threatened suit if he signed the proposed laws.

Today, he got sued.

PS:  Ordinarily, I would have merely cursed the mayor, as in "May the fleas of a thousand camels infest your scrotum".

Is there a Full Moon in Ohio today?

The Moonbats are out in full raving lunacy and this article in the Columbus Dspatch provides a forum for their howling.

I'm trying to convince myself that the proposal to "license ammunition" (and tax it, too!) was written tongue in cheek, but I'm afraid that the author was probably quite sincere in his demagoguery.

Item:  You can only buy "bullets"

Item:  A "BULLET BUYBACK" program.  (Like the gun buy-back program which has worked so well.)

Item: Bullet Buyers buy a bullet license, renewable every 5 years AFTER a new photo and Doctor's certification that you haven't turned into a raving lunatic in the interim.

Personally, I think Mr Shaefer should be calling his doctor for an appointment.

The French live up to expectations; they run and hide

Train staff on board the high speed train which was the scene of a suspected Islamic extremist attack yesterday have been accused of barricading themselves in their staffroom and locking the door, leaving passengers to fend for themselves. The Moroccan terrorist was disarmed and beaten unconscious by US servicemen and a British man after he opened fire on a Paris-bound train with a Kalashnikov.

A chicken walks into a bar.  The bartender says: "Hey, why the long beak?"
The chicken replies mournfully:  "Je Suis Francais".

The last French citizen I admired was Brigitte Bardot.

Once again, America and Great Britain have saved the French people.

I'm very proud of the Americans who saw what needed to be done and did it ... Right Damn Now!
Cool thinking and an immediate, overwhelmingly aggressive response were all that was required to eliminate the threat; but nobody expected that on a French Train.

(One of the "Immediate Responders" was from Oregon ... Roseburg is going to give him a great homecoming!  I hope to be there to shake his hand.)

PS:  Dear France, here's the way the "Surrender Position" is suppose to work:

PPS: One more word to the French:

UPDATE:  How America is responding to potential terrorist attacks on Amtrack