Tennessee Football Coach fired for making Obama song. He'll make more money when this song becomes a big hit than he would teaching school. Tennessee middle school assistant football coach, age 26, fired for a song he wrote and played! This could be the next number one hit country song. It's the best effort yet at encapsulating the outrage at the oversteps of this government in an entertaining song. Apparently, the guy was fired over the song because some parents complained. If you like it, help it go "viral" by passing it along to everyone you know. Click for a Great Song!!! x Tennessee Football Coach fired for making Obama so Not saying ... .... well, yes I am.
Posted by Jerry The Geek at 5/22/2012 04:49:00 AM No comments:

For those of you who want to go to the Nationals this year, and either haven't made up your mind for SURE or didn't get a "Slot" from your Section, you need to be aware of this announcement from USPSA:


The deadline for slots to the 2012 STI USPSA Handgun Nationals is coming up June 18. All slots not received by end of business on that day will unfortunately have to be voided and *CANNOT* be replaced. The unreturned slots will be rolled over in to the wait list, which opens June 4th.


Trust me, if you haven't shot the Nationals yet, you cannot claim to be a "competitor" in the largest sense.

I've been to a few Nationals in my time, and it's my personal opinion that they are the "Biggest Bang For The Buck" available .. even though they are outrageously expensive in terms of time, money, effort, heartbreak, and thrills.

The first time I want to the Nationals (Limited, in Las Vegas, 1998) I met Jerry Barnhardt in the Vendor tent.  I told him: "Hey, My name is so much like yours, the guys I shoot with kid me about beating Jerry Barnhardt, and I can't live up to the name.  So ... lose a match for me, will you?"

Okay, it was dorky, but just YOU meet your Idol and try to make an intelligent conversation!

In my first national, I was lucky;  I was TWO places away from the bottom of the pack ... not just in my Division, but Overall.   Could have been worse; I could have been at the very bottom (I think my overall percentage was insignificantly about 4%).  Still, it was worth the money and the travel and the inglory ... I got to shoot with some of the greatest shooters in the world.

I don't care if it IS your very first year competing, you owe it to yourself to got to the match and see just what IPSC is really about.  You'll meet people you've only heard about (and perhaps not even that), they will kick your ass, and you will consider it money well spent.

How many times in your life can you say that you have pitted yourself against the best in the world?  And if you're really lucky, as I was, you may find yourself shooting mano-a-mano against the world's champion shooters.

It's called the "Stand Your Ground" law. More than a dozen Michigan lawmakers want to get rid of it. They're afraid that the current law will lead to vigilante justice.


More than 24 states, including Michigan, have some version of the "Stand Your Ground" law. Michigan's went into effect on October 1, 2006. Now, these politicians say they're not aware as of yet that this law has lead to any unnecessary violence, but they want to prevent it from happening. ...

Well, that sounds like a good reason for preventing people from defending themselves from predators.

Shooting Wire: (Wilsonville, OR)   May 18, 2012 Crimson Trace, maker of the industries finest laser and lighting systems for personal defense, is hosting the world's First Annual Midnight 3-Gun Invitational this summer. This three night competition will take place just outside of Bend, Oregon in the high desert. What makes this 3-Gun Event so unique? The entire shooting competition will take place at night, in complete darkness. Competition will kick off just after sunset July 16 and continue into the wee hours of the morning each evening, with the closing ceremony the afternoon of July 18. The top 3-gunners in the nation, such as Jerry Miculek and Juli Golob, are registered and scheduled to compete.

I checked my results from last weekend's ARPC match (sent from USPSA.ORG) and ... as much as I appreciate the great statistical-reporting we now enjoy, I was appalled to read that I had got major penalties in almost every stage.

I took a picture of the printout: this was sent to me at 1:50 pm after the match. 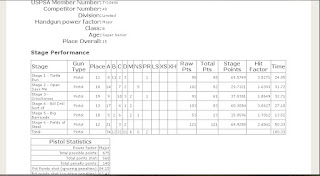 (Right-click on the image to see full-size image in a new tab)
Yes, that was my USPSA member number all right, and the right class, division, power factor ... but down in the lower right corner under "Pistol Statistics" it says:
Total Penalty Points: 140

... according to this, I shot only one stage clean.  Gee, I know I haven't been practicing much for the past few years, but I could only recall two stages where I got penalties!  (Wow!  I must be getting Sudden-Onset Alzheimers since last weekend)

A little explanation; I haven't read my email for a week, and I always read from the oldest unread email to the newest.   So the next email was ALSO from USPSA, sent at 2:00 pm.  It told a slightly different story: 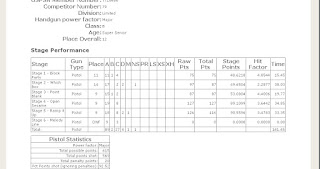 (Again .... right-click on the image to see full-size image in a new tab)

Same identification info as the last time, but this version has my competitor number as #79 ... which I recall as being correct since I was almost the last to sign up for the match, and I saw guys in line ahead of me with numbers between 49 and 78 ... so I know I wasn't competitor 48.
and the actual stats were a lot closer to what I remembered, too:
Total Penalty Points: 20

... Except these (a) were the stages for the APRIL APRC match, not the MAY ARPC match, and (b) it shows me as DNF on the last stage (classifier: "Melody Line"), and I shot that match complete, including the classifier. And I strongly doubt that my competitor number was "79" in April, because there were not that many competitors for that match.   Since the email identified it as the results for the MAY ARPC match, and I dispute the reported results for that match, I have no confidence in any of the match results I receive.

It has been a long time since I really worried too much about being competitive.  In fact, it has been since I was no longer able to reload .38 Super ammunition, so I could compete in OPEN division (in which I can still see the sights AND the target clearly).   Consequently, I'm not concerned that my reported statistics from ... well, either or both matches .... don't meet my very low expectations.

However, if YOU are competitive, and you want honest accurate reporting on the results of your matches, I strongly advise you to record your own stats from the match before you leave the range, and compare them to the results you receive from USPSA.