I was at an IPSC [USPSA] match at the Albany gun club, and not doing all that well because I haven't been attending many matches lately I'm out of practice. when I found myself on the Third Stage with a gun that wouldn't allow me to reload a new magazine.

Let me be a bit clearer:

I tried to do a reload, but the magazine would only go halfway in.  I tried everything; I even leaned over and whispered softly:  "I promise I'll still respect you in the morning" but that didn't work.

So I quit the stage with one magazine fired in what I had expected to be a three-magazine problem (8-round magazines), and took a zero on the stage.

[NOTE:  I had a GREAT time:  about 11 seconds on a 30-second stage, but I got a zero score of course because I ONLY SHOT EIGHT ROUNDS.]

After I signed the score sheet, I took my broke-dick gun to the safety table to get a good look at it.  After I field-stripped it and found some strong sunlight, I could look down at the magazine well through the top of the frame, and the right-hand side of the trigger yoke was protruding into the magazine well a good eighth of an inch.  It didn't look as if it had broken (at least in that part I could see), but it was at least bent.  Into the magazine well.

And here I always thought I had a delicate finger on the trigger!

Which explained why I couldn't even drop the hammer to clear the stage: by IPSC rules, the gun didn't leave the stage "loaded" but I wasn't "clear" in the strictest sense.

I gave The Beloved Kimber to my friend, The Hobo Brasser (THB), to do the mechanical stuff involved in removing the old trigger.  I'll be ordering a replacement trigger from Brownell's (I guess), and have it delivered to THB.

I have as much mechanical ingenuity as a hog in a sty, except perhaps not as much manual dexterity.

(I once tried to replace the floater bulb in an old-style toilet:  I broke the porcelain tank in the process.  I ended up having to buy a new toilet and hiring a plumber to install it.  THAT is how much of a mechanic I am!)

TO CONTINUE:
My friend THB said "I've got a back-up 1911 in the car, you can finish the match with that", which generous offer I gratefully accepted.  I finished the match with a gun that felt a LOT different (it was a Taurus, and the grip safety ... unlike The Beloved Kimber ... had not been pinned).

I read that there's a lot of outrage about the recent Supreme Court decision accepting the concept of Gay Marriage.

I don't understand that.

What's the difference between a Gay Person and a Black Person?


In a free state, there can be no special rights. We take our rights equally. If the cake bakers had said they wouldn't bake a cake because one of the women was wearing a Confederate flag on her t-shirt, how would the press have handled it? It used to be I got to decide who I would buy things from and what I would buy. The businessman got to decide who he would sell to. It is no longer that way and it will not come back. Now I can be forced by law to buy things (healthcare, as a start) and businesses can be forced by law to sell.

Equal Rights .. it's a wonderful thing!


One thing President Obama has done for this country (or perhaps what he has done TO this country) is that he has forced us to look at societal issues from a new perspective.

President Eisenhower forced us to look at our society from the perspective of a Black Person when he integrated schools and lunch counters in the 1950's.

The 1950s were a good time to be alive. ... It must have seemed to most Americans that God had truly blessed America. ... But an important change had been occurring in the nation. In the post-war period a massive demographic change began to occur. Blacks in large numbers started to move out of the South to other parts of the country.

We thought we had finally got our minds around the whole Black Thing when Ike took on the racial bigotry of Alabama.  No more apartheid, no more 'separate but equal' bull-crap.  No more water hoses, no more snarling dogs

Okay, we're still trying to get that "Black Thing" figured out.  We'll do it, though.  This is America.  Land of the Free, Home of the brave.

Except we're not yet brave enough to see ALL minorities in the same light as we are now (sort-of / kinda) seeing Racial differences.

There use to be this really awful term :"miscegenation".

It referred to marriage between people of different races.   Horrible word, I'm embarrassed that there's even a dictionary word for this ... this expression of acceptance between two people regardless of their race.

But we got past that, and we're a better people for our acceptance that people will find love where it happens, and the rest of the world be damned.

Now we're getting equally all worked up because persons of ...not a DIFFERENCE but a SAMENESS ... have grown to hope that their country will learn to accept them as readily as they did Black/White relationships.

I read so many rants about how Gay Marriage is going to undermine the Sanctity of Marriage.  But I'm not quite sure how that works.

As near as I can tell, the purpose of marriage (according to what I read) is to bless the conjugation of a man and a woman to produce children.

I married twice.   My first wife and I were blessed with two beautiful children who have grown up to be wonderful people.

My second wife and I produced no children.  She and I both had children by previous marriages, and she was no longer able to have children.  It did not matter to me; I love both my children and hers, and I felt no drive to be fecund.

So if the people who say that the purpose of marriage is to produce children, then my second marriage was an aberration?

Funny, it didn't seem that way to me.

Can someone please explain to me why it's okay that I married a woman who could no longer bear children, but if I had married a man who (obviously) could not bear children, then that would have undermined the sanctity of marriage?

The entire outbreak of outrage over gay marriage seems so queer .... I just don't understand it.

But the Good Thing is ... nobody is going to introduce aggressive canines and fire hoses at the marriage ceremony of Adam and Steve.

It's a Free Country.  This is America!

The Importance of Being Earnest

Sometimes you receive email from someone who sounds so real and the content is so earnest, you cannot resist replying ... even if the content is so bogus that you just KNOW it's a sham.  But you must resist the temptation anyway.

I recently received the following email:

I just sent you an email note and apparently this got confused with sp*a*m. You may recall my earlier correspondence regarding our defending gun rights, including the work by our Research Fellow Stephen Halbrook, the renowned Second Amendment legal scholar, author and attorney:

Hence, would you be so kind as to advise your email provider to remove your spam complaint?
Thank you again!
Best regards,
David

He didn't send me a previous email, nothing was 'confused' (my software works differently), and if an earlier email had been quarantined by my security software, then this email would have suffered the same fate.

I have not, of course, been corresponding directly with any member of the Independence Institute.  The premise is bogus, as is the entire email.

I ran across a firearms-related link *  to LIVESCIENCE today, and I was appalled by the political bias demonstrated in their articles.

There I found this infographic: 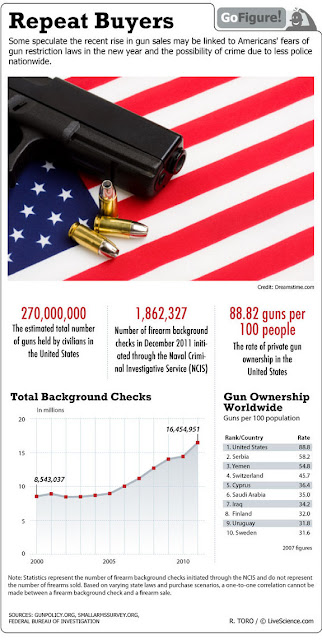 No, it wasn't a typo.  This 'scientific' website was so certain of itself that it took the acronym NICS, scrambled it to NCIS, and then looked up that acronym.

Note the source of the information.  I'm pretty sure that the FBI knows that background checks are really conducted by the National Instant Criminal Background System, not the Naval Criminal Investigation Service.

Or by a television series.

Perfect is the enemy of Good

In response to an article about point shooting, I have some opinions about this:

When I was going through Advanced Infantry Training (AIT) in 1969, one day our instructors took my class to the range to show us what Point Shooting really means.

They gave us BB-guns ... spring loaded, so very low powered (and also very inexpensive to teach the lesson) ... and told us that they were going to teach us to shootcoins out of the sky without using the sights.

Actually, the guns had sights, albeit crude ones.  But we soon learned that the instructors were correct.  In one afternoon we learned to point-shoot moving objects without really using the sights, and with an impressive degree of accuracy.

We started out shooting quarters out of the air.  We had to supply our own quarters.

As the exercise progressed (they actually gave us two or three hours to practice), we found that quarters were too easy to hit.

I found that I could get one-shot hits on dimes tossed into the air with a surprising consistency.