Concealed Carry When It's Not WELL Concealed

Firehand has a post up about the embarrassment (and consequent legal issues) when your Concealed Handgun isn't as well concealed as it ought to be:

Irons in the Fire: Central Texas College chief Mary Wheeler should live in the PROM,: “And let’s say it was accidental, that they had a handgun underneath a coat or something, they bent over and the handgun could be seen,” CTC Police Chief Mary Wheeler said. “It’s no longer concealed if someone can see it.” Chief Wheeler said a violation of this law could lead to disciplinary action up to and including termination of employment for employees or expulsion for students, including the first occurrence.

Whatever the reason, that's Not A Good Thing, especially when you're in an area which doesn't also recognize Constitutional Carry (Open Carry).

And even if you are legally "allowed" to Open Carry ... do you really want people to know you're carrying?

Generally speaking, that's not often a problem in the Winter; coats make it difficult to 'pattern' a handgun, but when it's on a belt (or even IWB) there is still the possibility of flashing it.

I've been using a small auto in a pocket holster, tucked in the inside/upper jacket pocket.   It absolutely doesn't pattern, and it's secure even if I stand on my head.  (Which I do a lot, any more.)

What it also doesn't do is allow for quick retrieval.  I would almost wish I had a left-handed pocket holster, so my right hand would grab the grip naturally.  As it is, if I turn it around ... the butt is pointed in the wrong direction and it's even more awkward.

I'll live with this over the winter, and perhaps try something else when it's no longer "coat weather".   The little auto has a belt clip which provides good retention and access, but again there are issues with concealment; that little 1/2" of the butt sticking over the waistband of my britches is impossible to conceal without the shirt-tail flapping in the breeze.

So far, I've just pocket-carried, and that's fine except I can't keep my money clip or credit cards in that pocket, and I've learned that I can't carry a hip-pocket wallet.   Every time reach to make a payment in a store, I grab my pistol; I haven't pulled it, yet, in the 10+ years I've been carrying.

Buyers' Remorse In The Making

I can't think of a more useless firearm, but somebody will buy it.

Sales out to zoom up to two, maybe 3 purchase a month.  For the first month.

A six-barrel .25 ACP pistol that fires two rounds with one trigger pull:

The outside-the-box thinkers at Standard Manufacturing, the good folks who brought us the double-barrel 12-gauge pump the DP-12, are at it again. Meet the S-333, it’s a six-barrel .25 ACP that fires two rounds with each pull of the trigger. The barrels don’t rotate like a pepperbox. Instead, they “Volleyfire” — a term Standard Mfg. has trademarked. MSRP is around $300, and it comes in all the colors of the rainbow. 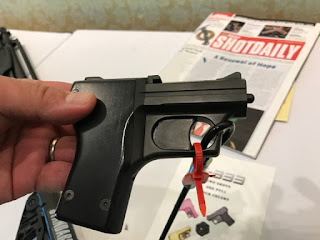 In Wisconsin, you can lose your Second Amendment rights if you're convicted of 3 misdemeanors according to a new bill proposed by "a group of Wisconsin legislators.


"They say the measure would make Milwaukee safer."

I don't know what that word ("misdemeanor") means in Wisconsin law, so I looked it up.

A misdemeanor is a crime which is punishable by less than a year in jail or prison.

So ... you can be treated as a felon if you have already been convicted of (for example):


... plus other enumerated 'misdemeanors': any combination of three.

Apparently,  any three misdemeanor convictions during your lifetime count; the accumulation of your criminal history is not bounded by any specific time line.  (I haven't read the proposed law or found a link)

The bill would make it a felony for people to possess a gun if they've had three misdemeanor convictions in five years.

I apologize for the mistake, The corrected reading makes more sense.
It still does not establish a legitimate precedence for undermining a citizen's Second Amendment rights for misdemeanors.

There are also reference to 'other felonies' included (straw buyers, etc.) which are already illegal under Federal law ... which makes the proposed Wisconsin law redundant in fact.

I don't know how boring it is in Wisconsin in the Winter, but these three bozos seem to have way too much free time on their hands.   I suggest they seek a second job, one which might be more inclined to keep them too busy to perform their legislative mischief.

I hear Burger King is hiring.

(see below for the original article)

sorry, I don't do facebook.  My son tells me that it's "The Devil".

But I'm grateful to the facebook dude, because he's so ugly he makes me look good in comparison.

Oregon, and the Right to Keep and Bear Knobkerries

Oregon officials have banned state employees from carrying weapons in the workplace unless they're needed for their jobs. The move caused consternation Thursday among Republican leaders in the Legislature. The Oregon Department of Administrative Services said it imposed the ban, which became effective on Jan. 6, in hopes of "providing a safe and secure environment for employees and visitors." Banned are firearms, daggers, slingshots, and a host of other specified weapons. Oddly, even knobkerries were mentioned. Knobkerries are clubs used by indigenous people like the Zulus in southern Africa, and are probably unknown to most Oregonians.

You realize that this would not make for a "safe and secure environment", right?

But if I was still working for The State, I would be a criminal.   Because what I did legally last month, would be illegal today.

For almost 20 years I carried a concealed Knobkerry at work, in a State Office, every day.  Nobody knew because it was ... well ... concealed.
And I certainly wasn't going to mention it. 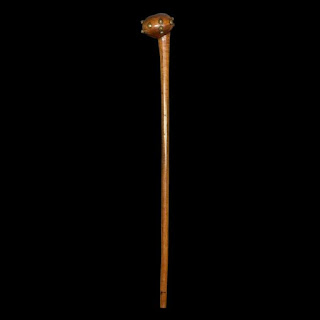 It was legal, because of state laws in effect in Oregon at the time, and I had a "CKL" (Concealed Knobkerry License".  But the place where I worked had an administrative rule disallowing the possession of knobkerries ... either open or concealed carry.    They could have fired me for wanting to exercise my God Given Right to Keep and Bear Knobkerries  (RKBK).

But I would not have been subject to legal action;   I was not breaking any laws.

My thinking was that Knobkerry Free Zones (such as schools) were a prime target of 'mischief makers', and if  'mischief' were to occur at my work place,  I wanted to have options.

I always felt much more "safe and secure" knowing that I could pull out my trusty knobkerry and pound the living crap out of anyone who decided to use an illegal knobkerry to attack my workplace.

Well, that has all changed now.   Because we are defenseless ... by legal fiat.

I am disgusted ... California Politics are creeping into Oregon.