CLEVELAND (AP) — A white patrolman who fired down through the windshield of a suspect's car at the end of a 137-shot barrage that left the two unarmed black occupants dead was acquitted Saturday of criminal charges by a judge who said he could not determine the Cleveland officer alone fired the fatal shots.

High-speed chase, a cop ends it by shooting driver and passenger through the windshield while he was standing on the hood of their car.   And the dead speeders were unarmed.

No problem, says judge.  Can't determine if those shots were the cause of death. Case dismissed.

Russell, 43, and Malissa Williams, 30, were each shot more than 20 times at the end of the Nov. 29, 2012, pursuit. Prosecutors argued they were alive until Brelo's final salvo but medical examiners for both sides testified they could not determine the order in which the deadly shots were fired.
The case hinged largely on the less than 8 seconds — 7.392, to be exact — during which Brelo fired his final 15 rounds.

Email ThisBlogThis!Share to TwitterShare to FacebookShare to Pinterest
Labels: Be Very Afraid, Police, War On Drugs

Shooting Sports ... it's the people we meet that make it worth-while

A couple of days ago, I received an email from a friend who had volunteered to officiate at a State Match for USPSA competition.

There were a couple of Range Officers who did not have 'timers', and unfortunately that had been overlooked during the match timing.

So my friend got online to his associates, and asked if anyone could loan one to the two Range Officer Volunteers who needed one.

I had one, and offered it to him.  He responded that he already had received one from someone else, and thanks for the offer.

Today, he posted this email message to his circle of friends:

I really love this sport.I think the world of the people that belong to our clubs.
I asked if we could barrow a timer, and within 6 hours I had 7 offers with more still coming in.
I now have one in my possession.
Thanks folks, your the best.           WALT

He's right, of course.  The joy of competitive shooting isn't just that you get to blast a lot of rounds 'down-range'.  It's that you meet the nicest, most polite, and most generous people in the world through shooting sports.
Posted by Jerry The Geek at 5/21/2015 09:50:00 PM 2 comments:

New Jersey fifth-grader Aarin Moody got a lesson in his school's zero tolerance policy after being suspended all of last week for bringing a foam Nerf gun bullet to school, according to his mom. 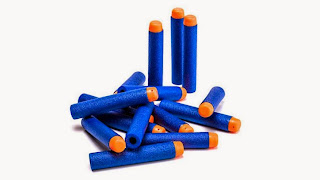 I don't know about you, but *I* am quite intimidated!

Not by the foam rubber 'bullets'; the scarey school folks, though, freak me out.
*Did I mention that this was New Jersey?*

When I was in Grade School, in a Previous Century Not To Be Named, we (students in 6th Grade) were trading miniature replicas of pistols and rifles like they were Sports Cards.  No special reason, they were just cool.

The same thing could get a sixth grader jailed today.  Funny ... we didn't have any school shootings back when guns were just 'stuff'.

I remember once I brought my father's "exotic" bullet collection to school for Show And Tell.  Everybody wanted to take a closer look at them.  But I don't remember anyone killing anyone because they got too excited.

Tough Call. *Who will you believe? John Kerry or Islamic Jehadists?"

Secretary of State John Kerry also said Monday that he was confident about defeating the Islamic State and about Ramadi being retaken “in coming days.”


Who are we to believe?  Enemies of The State Jihadists, or "Unfit At Any Speed" John Kerry?

I know.  It's difficult to choose between declared enemies and ... well, libotards.

My money is on the declared enemies.  They may be bad, but they may not be congenital liars.

Another Shoot-out in Waco!

(NEXT DAY: THE ARRESTS RESULT IN CHARGES FILED AGAINST 170 BIKERS!)


A trio of rival motorcycle gangs is believed responsible for a large gunfight that killed nine bikers and injured 18 outside a Waco, Texas restaurant, authorities said Sunday.

The good news is: no 'innocents' were killed or injured.   Good shooting on the part of the bikers?  More likely, non-involved people were smart enough to un-ass the neighborhood.  When the going gets tough, everybody who wants to live through the day get out of the bar.

Oh, yes.  Some news sources called the establishment a "restaurant"; but others called it a "Sports Bar".    It's all about what your meaning of "IS", is.  Personally, I've never cared for spectator sports, but when it comes to a shoot-out, my first choice is "NOT THERE".

Another Shootout in Chicago!
And in Illinois, after a brawl between "The Outlaws" and (civilians?), the Outlaws want their leather vests back.

Well, you can't blame them.  it's all about honor, y'know?

So while the rest of the world is worrying about Trevon Martin, Ferguson, Baltimore ... there is an entire subculture which thrives on violent confrontations.

It's A White Thing; you wouldn't understand it.

That's okay, neither do I

... this is the sort of thing that many people consider the "Gun Culture".

It's not, of course.  The American Gun Culture is responsible people who are non-violent, but are prepared to defend themselves against violence.   That sounds a lot like waffling, I know.

What is "The Gun Culture"?

My definition of "Gun Culture" is this:

I grew up in a 'gun family'.  My father was an avid hunter all of his life.  His hobby was to take old military rifles (1903-A3) and convert them into modern sporting rifles which were an expression of his art.

He bought me my first deer rifle when I was 13, and I was thrilled to finally get to go hunting with him.  More frequently (because it didn't depend on a 'season') we would go 'varmint hunting'.

And as bloody as it must have seemed to the varmints, it was a much more humane solution than the alternative.  (Of course the hares and the rodents of all kind probably resented our predation.)

I did some hunting of deer and antelope, and the meat which they provided to our dinner was welcome.  Mom was never a good cook, but fresh venison is a welcome supplement to our diet.  I ate Deer, Elk, even Bear meat.

I became involved in competition shooting.  For 15 years I was a Gallery Rifle shooter, both indoors and outdoors.  I spend a few summers working in harvest (both wheat and peas) so that I could buy a Valment "Lion" Free Rifle, with which I won a few junior matches.

In later years, I chose to shoot pistols in competition.  I'm now certified as a "not very good, but determined"  shooter in three divisions of USPSA shooting.

People enjoy shooting.  It's like throwing darts in a pub, only louder, and without the drinking.

Some people are more involved in self-defense shooting.  Nobody wants to hurt anybody else, but sometimes the circumstances are such that one needs to protect Hearth and Home, Self and Family.

But that's not what a lot of people envision when they think of the term: "Gun Culture".

THIS is the image that they see: