PART 01:
The question is whether a Methodist college should sponsor a "shooting program".  The Alumni are "up in arms" because they believe that a religious institutions should not promote any activity which involves guns.

INDIANOLA, Iowa -- A decision to boost a growing program has caused outrage from alumni at Simpson College.Opponents say it not only promotes guns on campus but it’s against the same religious beliefs that the college was founded on.

While it's not clear what kind of 'shooting sports program' is involved, it seems reasonable to assume that this is a .22 caliber rifle/smallbore/bullseye target competition activity.

In a word, it's similar to throwing darts in a pub.
Oh, wait; that would also be contrary to religious priorities.

PART 02:
Dozens of people gathered at the University of Kansas on Monday to rally against a state law that will allow concealed weapons to be carried on college campuses next year.

Oh.  That's okay, then.  If students, faculty, parents AND "Kansas" are all agreed that they don't want guns on campus, the solution is simple, and obvious:
Don't bring a gun on campus.
See how easy that was?
Now, if you can only convince that wild-eyed 18-year-old maniac with a stolen gun that he shouldn't shoot up your campus, there should no problem.

(PS:  You might consider sending an email to ISIS ... you know, those guys with that 'other' religious view ... telling them that they can not bring guns on campus, either.  That should solve THAT problem.) 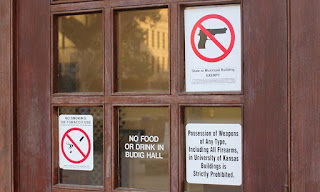 Islam is a religion and they have no problems with guns, and bombs, and field artillery etc.