OMG! I had no IDEA that killing Bambi was morally reprehensible !

The Victims of Gun Violence Politicians Won't Talk About:

In the brewing national discussion on gun violence, the most numerous victims--animals--are left out of the conversation. For every human life taken by a gun, hundreds, if not thousands, of nonhuman lives have also been taken. Yet for these victims, gun control advocates not only erase their deaths, but also actively promote and protect the killings. We fail to label the unnecessary killing of animals as gun violence, and instead we euphemize and romanticize it as "sportsmanship." But hunting is gun violence. A bullet ripping through flesh, puncturing arteries, taking a life is violence no matter the victim's species. And these deaths are far from as clean and easy as often presented 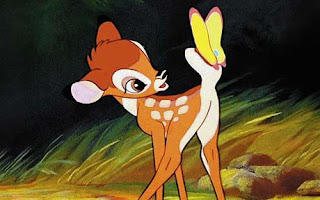 Liberals are SO funny when they get on their moral high-horse.

(Sorry, I imagine the expression "High-Horse" is probably species-ist.  Or whatever.)

Wrong on so many factors. Another liberal talking about something of which he knows absolutely nothing.

I often enjoy watching the local elk herd from my kitchen window. All the more so because a tasty spike is always in the freezer.