Because they don't trust ANYBODY, that's why: Double Think v. Cognitive Dissonance


The Newtown Action Alliance, a gun control group based in Connecticut, has sent a letter to all of their local businesses requesting that they make their properties gun free zones, and not allow firearms to be carried on their premises.

As is typical of all gun-control activists, this group does not believe that anyone can possibly justify being armed in public places.

Why? Because guns kill people.

These people would rather depend on their local sheriff to defend the public than anyone with a concealed carry license.  Because they trust the sheriff, but they don't trust armed civilians.

The problem is, these Newtown folks (and others with the same mindset) find themselves unable or unwilling to accept the "vetting" process by which their local sheriff determines that specific Concealed Carry License holders are legally determined to be a minimal threat to the community.

There are two psychological term for this: the first is Cognitive Dissonance

In psychology, cognitive dissonance is the mental stress or discomfort experienced by an individual who holds two or more contradictory beliefs, ideas, or values at the same time, performs an action that is contradictory to one or more beliefs, ideas or values, or is confronted by new information that conflicts with existing beliefs, ideas, or values.
Leon Festinger's theory of cognitive dissonance focuses on how humans strive for internal consistency. An individual who experiences inconsistency (dissonance) tends to become psychologically uncomfortable, and is motivated to try to reduce this dissonance—as well as actively avoid situations and information likely to increase it.

The other psychological term is known as Double Think, which is the exact opposite:

Which to say, Cognitive Dissonance makes the stress uncomfortable, because the suffer just doesn't know WHAT to think.

Doublethink, on the other hand causes no distress to the sufferer.  They know that they accept contradictory beliefs, but they don't consider that a personal problem.  (As it ... "it's not me, it's THEM!")

which leads to this:
Newtown Action Alliance 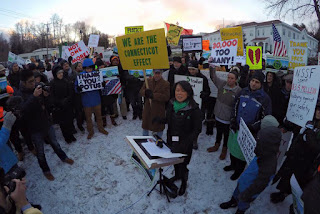 Liberal think: In government we trust (up to a point).