It's worse than even *_I_* had thought

Shock Medical Notice: We Need to Have a "Short 5 Minute PRIVATE Conversation With Your Child":
(June 05, 2014)


Do the government and its ancillaries have ownership over your child? Do they have the power to detain and question a child without parental permission? Apparently they think they do according to a new Michigan medical records access law which reportedly requires doctors to have a private conversation with minors when their parents bring them in for medical care. 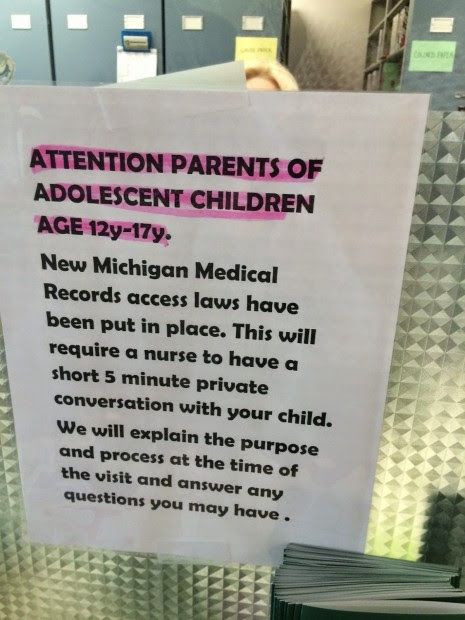 Mac Slavo over at SHTF presents this story of a woman who brings her teen-age daughter into a medical facility for Immediate Care for an injury, only to discover that she must allow her child to be "privately interviewed".

You will recall that I have talked about young children being quizzed by pediatricians about 'guns in the home", without the parent being present (Pediatricians vs Family Rights).   I'm not surprised that adolescents are also being "counselled" by medical personnel, sans parental consideration or consent,   Although the questions asked of teenagers are presumably about sexual situations and related health issues, rather than firearms, the principles are similar.

I'm aware that teen-agers may have concerns about sexual situations, and that they may be reluctant to discuss them in the presence of their parents.   That reluctance may lead to important health issues not being addressed.

But to make it a state law?

There must be a middle-ground which is acceptable to parents, their children, and the medical professionals whose priority is presumably to provide the best health-care for their patients.

I don't blame parents for being concerned ... reluctant ... in these circumstances.  A State Law enforces the distrust between the State and the Citizen.

There must be a better solution, or parents will seek other resources.   There are people who love our country, but fear our government.  When the government intercedes between Parent and Child, the mutual distrust is iniated by the government, not by the people.

Lefties own the education system, now they are tsking o0ver the medical care system, Khrushchev said they would destroy us from within.

When the State furnishes your medical care, the State can pretty well dictate the terms of that care. Welcome to 1984.