Why cheat at USPSA?

I've just read the article (via Gunwire ... probably rotated out by the time you read this) and you can click the link at the top of the page to read it for yourself.

I will not name names ... which are clearly shown in the referenced link ... because so far there are only accusations and I haven't found anything on the USPSA website (even as a "News Flash") which suggests that the accusations have been officially confirmed by the Regional Autority.   And by now *(1730 on Friday) the office is closed, so I can't even call to ask for a statement.

The entire weekend remains for rumor and inuendo to proliferate.  I won't be a party to assuming guilt without hearing from 'the other side'; I encourage you to wait, also, before you assume anything about the reports.

Essentially, a trained and experienced CRO (Chief Range Officer) has been accused of reporting stage times at Level II or Level III USPSA matches to influence the outcome of the match.  For one competitor, the stage-time reported by the RO to the person writing the figures on the score-sheet were faster than the actual time taken; for (some) other competitors, the times were slower.

Thus, the RO is accused of both means of cheating:

There are videos presented in the online article to support the accusation.  My compliments to "Caleb", who obviously went to a LOT of work to document the situation.   It's impossible to determine the veracity of the accusations at this time.  Please consider that while you examine the evidence for yourself.

There are unanswered questions, some of which will probably occur to you when you read the article and are generally raised in the Comments section at the end of the article:


We're only guessing on the first point; the article suggests that the favored competitor was a personal friend.  At this time, there is no suggestion that the "friend" was aware that the stage times had been reported incorrectly.

The "ARO" (scorekeeper) wrote down the times as reported by the RO.  In the videos provided, the RO was not filmed showing the actual timer results to the ARO.

The competitors literally have no time-sense while shooting a stage, as everyone who has ever competed at a USPSA match know.  We may get the 'feeling' that we have performed exemplarly on a stage, or that we failed to do so, but the actual time?  No.  If we're "in The Zone", our body takes over with learned reflexes and our minds are just along for the ride ... as disinterested observers.

(This last point may be pivotal in the inevitable discussions which will follow:  only ONE person knew the true time, and that is the RO.)

The most obvious question is, again .. why didn't the RO show the timer to the ARO?

When I went through my initial RO class (decades ago!), I was taught to show the timer to the ARO so that he could confirm my announcement of the stage-time for each shooter.  I have misread timers from time to time, and the ARO was always able to correct me before we agreed on the correct shot-timer reading.

But nobody else can see the time.

The question arose (comments) of whether someone can't "invent" a way to make the time visible to everyone, as a check on the Range Officer and also for the immediate information of interested observers.

There's no need to "invent" such a device.

Competitive Edge Dynamics has a package of both a timer, and a wireless display panel.  I'm not shill for CED (I don't really like their timers!)   It's called the "CED 7000 Pro Shot Timer & Accessories". 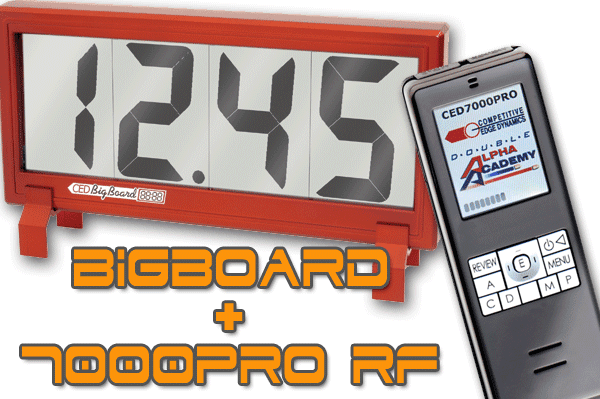 It sells for $355 at current market prices.

It's too expensive for club matches.  It can only be used on a single stage, and in a six-stage USPSA match the cumulative price would be $2,130 to use them on every stage.

Few clubs can afford this level of expenditure, especially considering that a "Major" match would probably feature a dozen stages instead of six.

(1) Whether or not these accusations are proven, USPSA will become MUCH more sensitive to the possibility of Range Officer Collusion.

(2) Public Display Boards (see above) will become a USPSA requirement for at least the USPSA Nationals, and likely for Area matches at well.

(3) If Level II matches are also required, fewer clubs will be willing to accept the honor due to the inordinate expense of providing 'mandated' scoring equipment.

(4) Section Matches and Charity Matches will probably not be required to accept this financial burden.

(5) Whatever else happens, USPSA competition will become much more expensive, because the hosting clubs WILL pass on the expense to the competitors.

(6) Most dreadful ... the perceived need to monitor RO veracity will possibly spell the end of USPSA as we know it.

This has always been a Volunteer effort.  We have always relied on the good offices of our volunteers .. USPSA can't function without it.

Everyone involved in this incident will come to "rue the day", however it shakes out.  The toothpaste is out of the tube.

If true, this is very disheartening.