I went to a USPSA match in Albany this weekend. It was a classifier match, and although I wasn't competing I did show up to see some folks and maybe take some pictures.
The match was almost over when I dragged out the camera to take a video of Fish shooting the last of the two Field Course" Stages, which included a Texas Star, a half-dozen IPSC targets, and a couple of 9" steel plates.

I thought it was a good run, but only mildly exciting (except for the shooter, of course).

When Fish came off the stage, after having bagged his pistol, he held up his hands and announced to The Peanut Gallery:

Sure enough, he was leaking, and from both hands.

As we took a short break to try to staunch his wounds, Fish told us the story.

He started out at stage left engaging four paper targets, then moved to the right to pick up the two steel and two more paper. He said he took the steel first, and that was when one of the bullets (more likely a large, jagged bullet fragment, judging from the way his fingers were sliced & diced) bounced directly and struck him where his fingers were overlapped at the front of the grip.

He said it hurt, but he went ahead and engaged the two paper targets on the right, then moved back a step to engage the Texas Star through the port.

Here's how it looked from the Peanut Gallery:

Can you tell when the ricochet struck? I can't. Here's a picture or two from the early attempts to 'stop the leaking'. (Note: if you can't stand the sight of blood, this may not be something you want to look at. But it's not gory, or NSFW.) 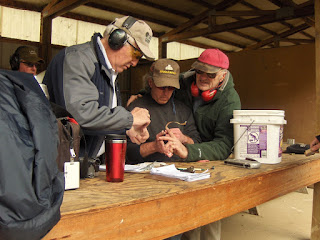 Picture 1: Trying to apply bandaids. (Yes, they are trying to use target tape to wrap the fingers.) 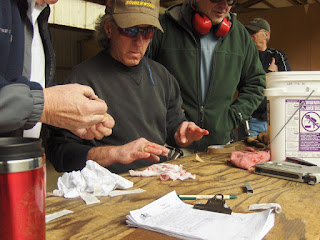 Picture #2, after the first couple of bandaids were applied:

Here's the story from Fish, from an email he sent 'later':

Trip to urgent care at Kaiser where they gave me a tetanus shot, took a look, and packed me off to the ER at Salem Hospital because of the chance of tendon and nerve damage. I didn't get back here until 8. Several X-rays showed nothing broken and no metal debris in the wounds, but I did have two deep puncture wounds on the middle finger of my left hand, a puncture wound to the middle finger of my right hand, and a nasty cut on the inside of the index finger on my right hand that finally required three stitches to close. Thank you to everyone who helped me, including the unknown good Samaritan at the range with a first aid kit who bandaged me up.

The ER doctor told me the new scars are\will be the sign of a life well lived.

Well, it's not the first time we've seen blood on the range, but it is a good example of the concern for safety involved in IPSC/USPSA competition.

After 25 years of competition, I have yet to see an injury which involved more than a few stitches, at worst. I've seen some serious Road Rash in the summer, from people in shorts who fall down while running on the gravel. In fact, I've had a couple of them myself.

And I've known ricochetting bullets to bounce back among the spectators, causing minor scratches or a small bruise at worst.

Compared with, for example, High School Football or High School Basketball, this Practical Shooting thing must be one of the safest competitive activity one can hope to find.

To compare, here are some of the web-based links to injuries in other competitive sports:
I've focused here, where possible, on injuries incurred by minors .. Middle School and High School. I haven't even touched on the 'individual sports' such as Wrestling and Boxing. But we will know that it's a rare year which completes without some death or permanent injury being incurred by one of these sports, which are more acceptable than the Shooting Sports (in the opinion of most people.)

In my personal opinion, a sport which most commonly leads to permanent joint injury, or permanent head trauma (eg: boxing) is more dangerous than any of the shooting sports.

It is perhaps indicative that I have made so much of a series of minor slices to the fingers, not even involving broken bones or damaged tendons.

BTW, I labeled this a "KaBoom" moment for purposes of comparison. This was not a "KaBoom"; the firearm functioned perfectly, and the latest word is that there was no damage to the pistol. This would probably not be true if a full-diameter bullet had bounced back with anything near to the initial velocity of the bullet. (If Mr. Fish informs me that the pistol was damaged, I will of course correct this impression.)
Posted by Jerry The Geek at 1/11/2009 06:43:00 PM