I experienced a KaBOOM event with my STI Edge (10mm) on Saturday at the ARPC range. 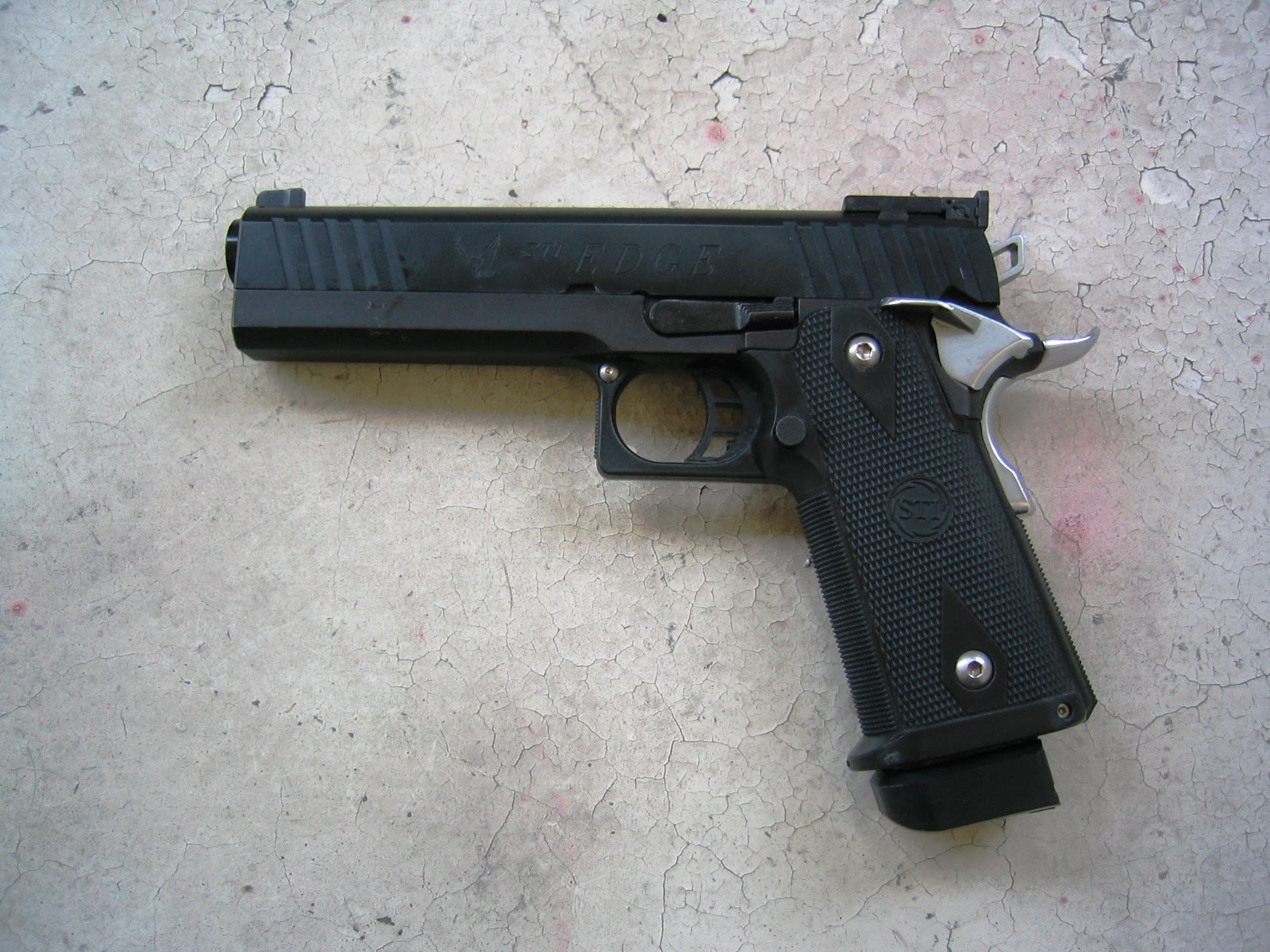 The Event:
The gun did literally go BOOM instead of Bang, and there was a lot of gunsmoke venting from the breach area.  The following round in the magazine did not chamber (although the bullet was pushed deeply  into the case and there was a gouge in the nose of the bullet), and in all the excitement I can't tell you now whether the slide had cycled enough to cock the hammer.  The slide lock had been pushed about 1/8" out of position, though, and the 'catch' was no longer under the slide skirt; the movement was presumably caused by the "pressure spike", so it's reasonable to presume that the slide had cycled at least far enough to allow the slide lock to move out of place (from under the slide) without damage..

And I'm certain there was a pressure spike, although I have no idea why that could have happened.  See below.

This occurred while I was demonstrating a teaching-stage at my INTRODUCTION TO USPSA class at ARPC.   Because I didn't have a volunteer "Demonstrator" at this particular class, I had resorted to my alternate practice of having members of the class act as Range Officer while I ran the demonstration stages.

The student RO didn't know what to do, so I just talked him through everything I was doing, and advised him to watch me closely to insure that I was always handling the 'malfunction' in a safe manner.  Essentially ... so that the gun was always pointed downrange; I didn't sweep myself while I was trying to clear the "Malf";   to insure that everybody else at the bay was keep safely uprange and out of the way;  and so that I had a witness to the events in case something went wrong.


The Gun:
At the time I couldn't drop the magazine,  and the slide was slightly out of battery.  I could NOT rack the slide, although it moved back in full-battery easily enough, when I pushed it..  There's now, and there was then, only about 1/8" play in the slide.  I did get the slide lock back in place, and I dropped the baseplate of the magazine to make sure the gun was definitely "unloaded" before I bagged it and left the bay.  Yes, I could thumb cock it, and dropped the hammer twice, so I was sure that there was no live round in the chamber;   later, I also dropped a squib rod down the barrel and it looks like it went all the way to the base plate, but the empty brass MAY be  still in the chamber;  I checked it again tonight, and I'm still not sure.   But I doubt it.


Lots of smoke, and lots of dirty gun-oil on my hands, but no injuries at all (just seemed like a lot more recoil than I'm accustomed to ... but that may be caused by my shock.)  Definitely, there was no "shrapnel" .. no "Thirty-Eight Super-Face".  I got one small drop of black oil on my nose, that's all.  I noticed that I kept asking everyone else if I had anything on my face ... I only expected more black oil specks, because I felt perfectly okay ... if a little shook up.

Later, I had no problems removing the magazine shell from the gun; I can't say why I was unable to do that on Saturday, but perhaps I banged the gun around enough while moving it around to loosen whatever condition had jammed it in place before.  I hadn't tried after I dumped the rounds, the spring and the follower from the magazine, so that might have been enough to relieve the tension on the magazine release.


Reloading Habits:
I have discarded the ammunition in the magazine; and am saving the rest of the ammunition from that batch; I don't intend to use it again, just to stay safe.   But I still have the damaged 'following round' from the magazine.

I really don't think it was a squib; I would have heard that.   At the time, I was shooting at a US Popper at 20+ yards, and each shot was a carefully aimed shot.  I wasn't feeling as if I was under pressure of time ... I was trying to get a good sight picture/sight alignment;  I was going to make up the first-shot miss.  And I don't think it was a double-charge, 'cause the loading press I'm using right now (an aging "Classic Lee Turret Press") doesn't have a powder measure I trust, so I'm using a "Bonanza" powder measure to include charging the rounds as a separate step of the process; I examine every round in the board after measuring powder in them, to insure that the powder level looks the same ... not underloaded, not overloaded... under a strong light as every other round; the case is about half-full  (4.5 grains of VV320 behind a 200-gr Montana Gold Truncated-round bullet -   I've been using that same load for the past 10,000 rounds plus!). 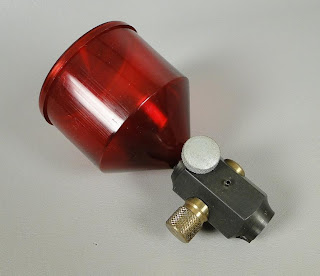 The Ammunition:
On the other hand,  I've sometimes been using moly-coated 200gr hardlead truncated lead bullets for the past 300+ rounds.  I haven't noticed any degradation in accuracy as a consequence, so it's hard to believe that I've got a barrel so leaded that it wouldn't pass a jacketed bullet.  I've written an email to "my gunsmith"  (Rob Shepherd of Shepherd Arms, to whom I intend to take the gun for examination and needed repairs) to keep an eye out for leaded lands, while he's looking at the barrel.

Frankly, I'm almost as interested in figuring out WHY, and HOW, as I am in getting the gun running again.

But the really scary thing is ... the next round out of the magazine was grossly distorted.

(1) The bullet was mashed in and discolored (by the vented gases?). 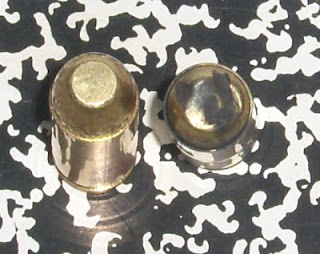 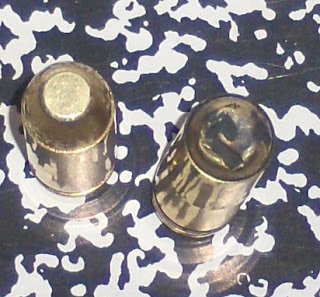 (2) The bullet was punched deeply into the case ... it looks like it was stopped by the powder in the case ... which it obviously compressed, because ..... 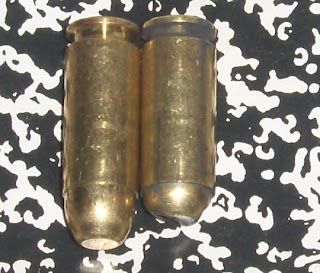 (3) ... the pressure in that unfired case was so high that it forced the primer part-way out of the primer pocket! 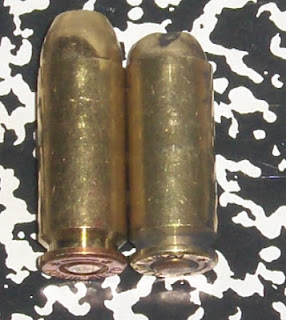 Remember, this round (the one on the right in these pictures) was still in the magazine after the Ka-BOOM.


Preliminary Conclusions:
I wish to emphasize, however, that although the ammunition blew up .. the gun held together!  Pending further evidence after a thorough examination of the gun, I would like to present these three preliminary conclusions:

(1)  The gun didn't vent shrapnel into the air, into the person of either the shooter (me) or the RO .. a student.  This is in direct contrast to the earlier experiences with "thirty-eight Shrapnel Face", "Glock Kaboom", and "Forty Short and Wicked" experiences.
(2) the reasons for this are that the gun and the case (10mm) are more robust than those which typified those comparative examples.  The gun was BUILT on the very sturdy frame designed and manufactured by STI.  The design of the gun included a fully supported barrel, and that "plastic hand-grip" had no problem containing the exhaust gasses.  Also, the 10mm cartridge case is MUCH more robust than the notoriously weak .40S&W; the case features much more support around the base web, which prevents the base of the cartridge case from either splitting or separating under extreme pressures .. the root cause (if you will forgive the pun) of much damage to shooters in other situations.
(3)  While I'm disappointed and distressed by the incident, I'm still a little smug.  When I bought the EDGE, I had previously talked to the President and CEO of STI (Dave Skinner) and told him that I was prepared to buy and EDGE when it was USPSA-Limited Division legal in the 10mm ... I would not buy it in its current .40S&W configuration.  Dave responded some months later to inform me that it was now legal in that 10mm configuration, and I was sufficiently confident in his word to buy the gun.  I think this experience proves that the 10mm, although the brass is nearly prohibitively expensive (at 17.3 Cents per round) is sufficiently SAFER than the .40S&W round to justify the pennys-per-round COST as opposed to the cost of paying physically for any errors I may have made in my reloading habits.
Posted by Jerry The Geek at 3/04/2013 01:12:00 AM

Have you ever thought about writting for "Front Sight"?
Antipoda

Antipoda - I have written several articles which were published by Front Sight Magazine (the "house organ" of USPSA). They pay good. Once I wrote an article which was accompanied by photos taken my my Significant Other, SWMBO. I got a check for the article, she got a check for the photos. Pretty good deal, for folks who would have made the same effort for free.