The Gear You Need to Gut a Deer | Field & Stream

The Gear You Need to Gut a Deer | Field & Stream:

Store-bought field dressing kits often include a bunch of unnecessary items for a hunter who’s faced with gutting a deer and getting it home. This D.I.Y. kit fits into a gallon-size plastic zippered bag, which also serves as a handy place to put down a knife while you wrestle with a transcending colon. At the truck, stash 3 gallons of clean water for rinsing out the body cavity, and a hatchet if you want to open the pelvis. Latex Gloves: Lots of field dressing gloves go up to your armpit, to turn blood away from clothing and any open cuts. But wrist-high gloves are form-fitting for a better feel and grip and still prevent blood and nicked guts from infecting small cuts. Zip-Seal Bags: Have two gallon-size bags for the heart and the liver. Paper Towels: I like to keep 15 paper towels, folded up, to use as cavity and hand wipes. Bandages: Pack these for knife nicks.  .....

Sorry.  They actually had me thinking, for the first few sentences of this article, that they knew what they were thinking of.  (Especially in that this was gear which they planned to carry while hunting).

Sorry .. it just gets worse.

What you need (as commenters emphatically "suggested") is A Sharp Knife.

Everything else is gravy --- and excess weight.

Point About The Knife:
I have noticed that people like those bowie knives, with the sharp points.  Not good for gutting, and sure not good for skinning in the field!  If you're going to skin in the field (highly recommended if you can do it .. it helps cool the meat down QUICKLY), then you want a skinning knife, which is defined as a knife which isn't going to dig into the meat while you're trying to slit the skin at the breastbone. 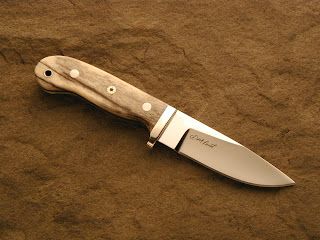 A drop-point knife is best ... preferably small, light, short and very sharp on the edge!  This is a drop-point knife: more handle than blade (and those of you who insist on correct knife-culture nomenclature ... STFU; I know what I'm talking about and I know the right words like 'hilt' and stuff, but I don't care.)  The long handle (See above) gives you control and leverage, and the point prevents anything other than a smooth cut when you're skinning, while the sharp edge on good steel provides a consistent, reliable and straight cut.

One of the things the F&S stream article suggests is "... a hatchet, if you want to open the pelvis".  I'm actually inclined to bring a hatchet with me while I'm hunting.  Yes, a split pelvis makes it easier to eviscerate the body cavity,  but it also makes it easier to remove the antlers from the skull, and then chop the cervical vertebrae.  When you're dragging a carcass uphill from a deep canyon, being able to easily remove lower legs and skull makes a HUGE difference.

The same with having some rope handy.  You can drag a carcass from the antlers, but it's awkward and that's one less hand available to grab the next pinion pine limb to help you up the shale slope.  And .. gee .. I've just chopped the antlers out of the skull!  (They fit neatly into the body cavity, along with the organ meat if you're the type who wants to save them to feed the relatives whom you don't like very much.  Personally .. yuck!)

Did you notice that the article didn't include a whetstone, or a sharpening steel?

Another thing that the article suggested was water to wash the carcass.  That's not only useful to get all the hare off the bare meat (if you can skin it in place, and don't intend to keep it) but it reduces the temperature of the meat immediately.  The quicker you can cool the meat, the more likely it will still be tasty when you get it to the storage unit or the butcher.

Some game animals .. .especially Prong-horn Antelope ... are intrinsically "gamey".  You must remove the lower legs (glands there!) and viscera quickly to keep them from being inedible when you get them home.

When I was hunting Antelope in Oregon and Wyoming, the terrain was flat or rolling-hills, not hard at all to get to the game with a vehicle.  We carried not three-gallon, but five-gallon cans of water, and sluiced the meat copiously after the carcass had been skinned, eviscerated, and "lopped" (head, lower limbs, hide).  And we also brought tarps, to keep the carcass clean.  You also need to pick off the bits of hair from the skinned carcass; otherwise, when you butcher you spend more time scraping off hairs .. or you just cut off the contaminated skin.

An Antelope which yields 80 pounds of meat is a rarity; you don't want to slice off otherwise-edible meat just because it has hair glued on.  It's quicker, easier and neater to keep the hair OFF the carcass, or remove it while the meat is still moist.

What do you REALLY need to "Gut A Deer"?
So, my personal list of "what you need to gut a deer" (or other thin-skinned game animal) includes:
Actually, a hatchet is not absolutely necessary; if you have  a sturdy knife, you can split the pelvis by hammering it with the heel of your hand and 'sawing' it with a knife which has a toothed back.

There are knives which are combination knife and saw; here is one example:

If you're deep in the bush, this might be worth the money at about $70.  Easier to buy, than to carry a hatchet!

City-Folk Stuff?
We could talk all night and half the morning about hunting equipment, but the point here is that many of the "items" suggested by the F&S article are just ... city-folk stuff.  You don't need it.

My Goodness, I do so love The Internet.  It's amazing to learn how far I've become disenfranchised by The East Coast .. and now Field and Stream magazine is catering to namby-pamby boy-men hunters who can't abide the feeling of blood on their hands?

I think it's a really good thing that "Field and Stream" magazine wasn't publishing in 1776.  There would never have been an American Revolution.

Email ThisBlogThis!Share to TwitterShare to FacebookShare to Pinterest
Labels: Nanny Statism, The Way Things Were

handi-wipes are the greatest invention since duct tape and the blue tarp ;-)

Hansi-wipes are great for getting all that black soot and gunk off my hands from shooting a revolver and cast bullets.

Okay .. yeah, I get it. Handi-wipes get the gunk off your hands, whatever the "gunk-source"

Water is just as efficacious in removing organ tissue and blood from your hands, after you have field-dressed your game.

And it's not as ... wussy .. as carrying a pocketful of handi-wipes. I mean, even the name smacks of wussiness!

Funny read. I am one of those city folk and it gave me a chuckle.