Observant Sikhs and conservative Muslim women are now able to wear religious head coverings, thanks to a directive issued Tuesday that updates the Army's grooming and appearance regulation. Sikh soldiers also are allowed to maintain their beards, according to the update. Soldiers will still have to submit their requests for brigade-level approval, but the move opens up service to people who otherwise would have had to abandon cherished religious practices to serve. Since 2009, religious accommodation requests received by the Army have largely been from soldiers wanting to wear a hijab or a Sikh turban or patka with uncut beard and hair, according to the directive.

When I was in the service, we were told we could not have beard or moustache because "it doesn't match your official ID card".   Which meant, of course, it was because some 'suit' had a stick up his butt.

When I got back from Viet Nam two years later, with three stripes and a rocker and a CIB, nobody even mentioned my handlebar moustache.   I didn't look like my Military ID Card (which I had lost in a swamp somewhere) and I still wasn't strack;  but I was "colorful". 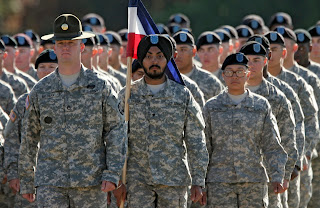 Check the picture .   Do all these people look "Strack"?
I think they do.

we believe in diversity...the longer we are here de worse it gets.

My beloved Army is going insane.