Don We Now Our Gay Apparel --- Random Thoughts Of The Season

There should be a law, I think, which separates the Election season from the Christmas season.   By a few months, at least, to allow us time to recover from one emotionally laden season to the next.

I cut off my cable TV about 20 years ago and haven't missed it.  But I listen to the radio every day and that miasma combination in November/December makes me feel like that scene in The Clockwork Orange when they tape the guys  (Malcom McDowel) eyelids open and force him to watch "Cinematic Aversion Therapy" videos until he breaks and sends his own mother to the breakers ..... or whatever.

Having suffered through the Presidential Election Season * when we were enjoined to vote for the Least Worse Candidate *, we are immediately inundated with Bad Christmas Music.

I'm not just talking about Bing Crosby and (as I mentioned earlier) "I Saw Mommy Kissing Santa Clause" and "All I Want For Christmas Is My Two Front Teeth" ... no, there's also "Grandma Got Run Over By A Reindeer" (okay, I kind of liked that one).

My Rock Station is playing Christmas Carols.  I had to turn off the radio; I'm listening just now to Dire Straits / "Sultans of Swing" just to give my jingle-jangled nerves a temporary break from the sugar-high which has become The Christmas Season On Radio (and has been Christmas for most of my life!)

If I had a television, I'm sure I would be complaining about that, too.

Actually, I do have a television .. which is connected to a VCR and a DVD player.  Christmas celebrations in Geekistan includes all the versions of Die Hard.

Now ... there is a guy who has truly donned his gay apparel! 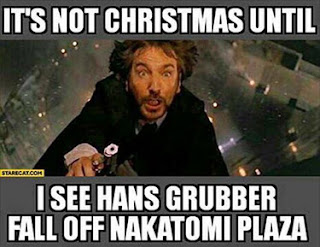 I'm sticking with this as my Christmas Music de jour.

The grinch is a curmudgeon.

...Oh and you forgot Alvin and the chipmunks, eech!

A few gentle suggestions: You have a computer, turn to U-Tube and you can listen to any kind of music you want from 1940s swing to modern dreck, and it is free. I like the 50s and 60s, both C+W and rock and roll. Or tune your radio to NPR(ignore their version of news and current events) and listen to ageless classical music or immerse yourself in opera sung in Italian. The third thing you can do is take yourself down to the largest indoor mall in your area, find a comfortable bench and sit and gaze upon all the hot females that pass by.
May you have a very Merry Christmas and Happy New Year,
P.S. I too am TV-less. We stopped satellite and live to far from a transmitter for an antenna. TV Land had turned to dreck.