Or, if you don't like cleaning your gun .. buy an STI.

I've been running a little experiment for the past year.  I shoot my 10mm STI Edge twice a month .. once when I 'demonstrate' each training stage in the "Introduction to USPSA" class, and again the next weekend when I compete at my local match.

Then I take it home and don't take it out of the gun bag until next month.

Every now and then I look at the barrel ... from the outside ... by racking the slide.  I see a lot of dirty oil on the outside.  God only knows what it looks like on the inside.

Why do I look at the barrel?  I want to see if there's plenty of oil on it.  If it looks thin, I pour some more oil on it.  Usually 30 weight motor oil .. it works just fine as a lubricant.

Oh, sometimes I use a paper towel to wipe the old oil off the part of the barrel that I can see when I rack the slide, and then I pour more motor oil on it.  There's a technical name for this process.  It's called "Cleaning My Gun".

Sure, that's  not what most people would call it.  "Abuse" would be an alternative term, but I decided not to call it that, so it's not abuse.

I use to clean The Beloved Kimber by putting it in the dishwasher.  That worked fine for me, too ... although I occasionally actually ran a brass brush through the barrel.  See, I was using hard-cast lead bullets through it, and I do know the effects of leading on a barrel; reduced accuracy.  That's not generally considered to be A Good Thing.  Especially not good when you use the gun for competition (as I do).

But even when I 'cleaned' The Beloved Kimber, I always DRENCHED the wretch in oil.  Yup, motor oil.  Five bucks buys a pint of oil, and it lasts for years!

By now, you're either thinking that this is satire, or that I'm a complete idiot.  If so ... you're right.  I am an idiot, because I do know how people tell me to take care of a gun.   I just don't listen to them.  I take my own advice.

I got that piece of advice from Dave Skinner, past owner and CEO of STI Guns, Inc.  He should know, since he built and sold STI pistols for years and years, all around the world.

The people who caution you not to 'over-oil' your pistol?  I think they need to define the term.  So far, I have determined that the problem with "over-oiling" your pistol is that it leaks out and makes the grip slippery.  My solution to "over oiling" is to wipe off the slippery stuff on the grip.

This isn't Rocket Science.  How much oil is in the crankcase of your car?  More than you need?  Well, it helps to have enough oil on machinery, but my EDGE doesn't have a crankcase.

My Edge works reliably, all day, every day.  The only time I have problems with it is when the ammunition I reload is "off spec".  That happened last month, when my seating die got loose and I cranked out a hundred rounds which were over-all length 1.275" instead of 1.250".  I didn't notice it until I got to the match and discovered that I could only put 15 rounds in the magazine instead of the usual 17 rounds.  I had a couple of feeding problems during the match, which was maddening.  When I got home, I reset my seating die to the correct specs, re-seated the remaining over-long rounds and cranked out a couple hundred more.  They worked just fine in the October match ... and no, I didn't clean my gun before that match, either.

I suppose I will actually clean the Edge sometime this winter, when the competition season slows down.  The days are short, the nights are long, and a Geek has to find ways to fill those idle hours.

So yeah, I'm pretty sure I'll clean it.

Not that it needs it. 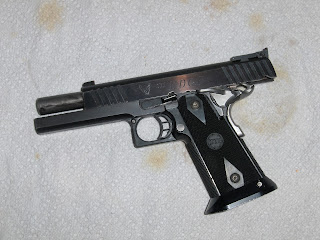 Over-oiling: Fine in controlled environments, such as ranges, or tropical/grassy areas until you reach the point of oil spattering your lenses; not fine in sandy or moon-dust environments,where it binds the action.

Motor oil: absolutely fine, unless in northern states in the winter; high-temp automotive grease ($3 to $5 per 1 lb can) works great in warm months for actions, and is all I use for coating metal all year around.

All opinions based on every sandy deployment and annual training I've ever been on.

Yo, thanks for including the comment about "sandy or mood-duct environments". We rarely encounter these conditions here in the Great Pacific North-Wet, but we need to be reminded when we go to matches in, for example, Nevada.

When I was in the service, the red dust that tanks kicked up on the dirty Vietnamese roads were a continuous problem. We cleaned our AR16s with gasoline every time we hitched a ride back to our basecamp. Yes, we had special lubricant and used it sparingly.

Oregon winters can get really cold, so I switch from motor oil to sewing machine oil. Which forces me to actually CLEAN my pistol, to remove the heavy-weight oil. Bummer, Dude!

Some time back my open gun went TU. Jerry let me use his for the last stage. My hand was covered in hot oil after I finished the stage. SWMBO used to wear gloves (to protect her hands I think).

The dishwasher?? That's interesting! I use a Branson Ultrasonic Cleaner, like these: http://www.sonicsonline.com/branson-ultrasonic-cleaners.html

It works really well, I highly recommend it!