His name was Michael Robert Jones.

Maybe it was his bearing, or his military manner. Maybe it was because he was a Marine, and damn proud of it. It may have been his immaculate "David Niven" pencil-thin moustache, but probably it was a combination of all that plus the fact that he NEVER showed up on the range without his neatly starched USMC "Cover".

The General attended exactly one IPSC match every month, at the Tri-County Gun Club in Sherwood, Oregon. There were many other matches available within a short driving range from his home, but he had a special affection for this range.

You see, he was the man who introduced IPSC competition to Oregon.

In 1978, along with a few friends, he organized the first Practical Pistol in the state. They called it "Combat Pistol" at the time, but it didn't make much difference what it was called; it was an excuse to go shooting with his friends.

I first met him in 1983, when I shot my first IPSC match. The sport was much better organized by then. USPSA and IPSC had published their first edition of the rule books, and Col. Jeff Cooper was still The Father of IPSC.

But The General was The Father of IPSC in Oregon.

In recent years, he stepped aside and left the match administration chores to younger men. He never attended more than one IPSC pistol match per month, but he rarely missed a "Practical Rifle" match even after that sport became "3-gun".

After SWMBO started coming to matches with me, and even before she started shooting, she met The General and soon learned that this was a very precise man. She mentioned to him once that she needed to 'load some more bullets in this magazine". He looked at her for a moment, then carefully explained that:

"These are not bullets, these are ammunition. One is called a Round or a Cartridge. A 'bullet' is the pointy part that comes out of the barrel."

A few years ago, when he was 70, he had open-heart surgery. Three weekes after the operation, The General showed up at the next IPSC match. He didn't stay for the whole match, and he always had to husband his strength to get through a match after that, but he would NOT miss a match ... unless his grandchildren were visiting that weekend, in which case his priorities were to be with his family.

Although he enjoyed IPSC, he never worried much about his place of finish. He shot Limited Division with his Colt Gold Cup; he didn't compete in Limited 10 because ... well, because that's not what he wanted to do, I guess.

In later years he enjoyed the company and the cameraderie more than the actual shooting. But his club had one long, narrow bay where they often placed stages featuring a line of targets to be engaged as you moved past them. He revelled in this bay. He would walk down the line of targets engaging them one-handed, just to show that he could. Because of his flair, his experience, his contributions, his soft-spoken manners and his obvious joy at just being there, we treated him with respect as if he were everyone's father. He wasn't competitive, he was just there because this was one of the things that he loved to do. He was a gentleman, and we loved him.

He wasn't inclined to load his own pistol ammunition, so he graciously allowed me to reload for him. In November, 2004, he showed up at the monthly pistol match with 1000 rounds of .45acp brass to be reloaded. He said: "This is the last loading you will ever have to do for me, but I need it now, anyway."

I delivered his reloaded ammunition at the end of November.

As far as I know, he had never shot a single round of the latest batch I had loaded for him.

But he had it, if he needed it. 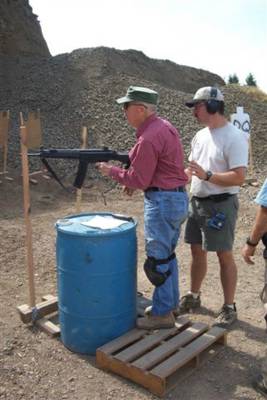 Kinda makes me feel that I knew him........or wanted to
Thanks

Well said, Geek. Those of us who had the priviledge to know him will miss him. He also shot the occasional practical rifle match as well.
Mark O'Shea

The Canadians have picked this up.

Thanks, Jerry, for doing this. Mike was a fine man, and he was my friend.
Randy

Usuallyu any news or Blog entry about the goings on in my home state make me embarassed for Oregon. Thanks for giving me a reason to hold my head a bit higher.