Last year, John had a stroke.

It was a bad one. For a while nobody was sure when, or whether, John would ever walk again.

Let alone ever compete in a pistol match.

John was a friend of mine. Not a "close personal friend", in the sense that we went to each other's house for dinner and had helped raise each others' kids. We don't go to the same church, we don't chat on the phone. The fact is, I've never seen John outside of the venue of a match or a gun club activity.

That would be ARPC ... the Albany (Oregon) Rifle and Pistol Club, of which John is a past president, and has held other offices as well.

But a year ago, and please understand that this is an approximation, I learned that John had been struck down by a killer medical condition. This is the kind of thing which leaves you with one side of your body just ... cut out of your biological circuit diagram. Stroke victims have to work as hard to regain control of their body as hard as amputees have to work to learn to live without a limb.

Today, I went to the club to teach an Introduction to USPSA class, and as I was walking along the North Range I saw John.

He was at a safety table, threading an ammunition carrier and a holstered revolver onto his belt.

He was leaning against a gaudy candy-apple red 'walker', with wheels, and was so engrossed in what he was doing that at first he didn't notice me.

We chatted for less than a minute, exchanging greetings to each other and to SWMBO (who has been following the story of John's stroke, and has always been eager for the sparse news about his recovery).

I went on to take care of my business, and he continued with his. 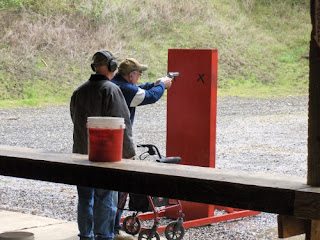 A few minutes later, I was in Bay 3 waiting for the ICORE squad to shoot the first of their five stages. When they cleared the stage, I would have use of that bay for the rest of the afternoon for my class. We were just waiting for the Revolver folks to do their stuff. You know, just hanging around.

It was a simple lateral stage design. Start in Box A, engage a target with six rounds; move to Box B, six rounds on the target. Move to Box C, repeat. 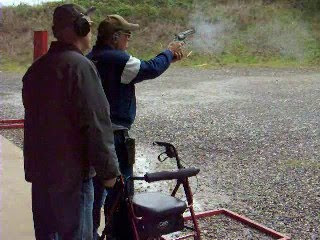 Because it was a rainy day, Match Director Mike McCarter had designed all of the 5 match stages so you could move under cover between firing positions to shoot the stages. Thus, everybody was walking on the concrete pad. John's walker could help roll him from one shooting position to the next.

It was a slow process, but John didn't seem to be very worried about it. He was here to shoot, and obviously his philosophy was "whatever it takes to get the job done; anything at all".

After he finished the stage and was busy stowing his gear in the carry-compartment of his walker, I asked John how it felt.

"Oh, you know. I shot pretty slow. But it's always like this for the first stage."

Yeah, I know how that is.

John's squad finished the stage, cleared the bay, and I started my class. By the time the class was finished John and the ICORE shooters were gone and I didn't find another opportunity to talk with him again.

What was important was being there.

Theordore Sturgeon, a Science Fiction writer, is famously credited for saying "80% of everything is showing up."

John was there. He showed up. He did what he had to do, so that he could do what he wanted to do.

I've been around the world, and I've "seen the elephant". This was one of the most courageous, most inspiring things I've ever seen.

Okay, it was probably not the flashy Alpha Prime kind of heroism and courage which we tend to attribute, for example, combat.

It was simply the basic courage of a man who is determined to come back from a hugely traumatic event, and take his life back.