Sherrie Of The Jungle 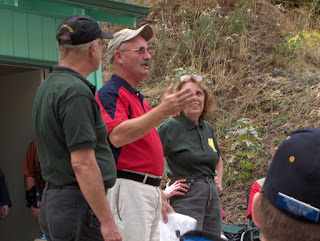 It is with great sorrow that I must inform you that Sherrie of the Jungle, "The Princess of the Universe", has passed away from complications of Cancer.

Sorry, I'm not completely certain that her cancer is the direct cause of her death. But she was always so vital, so energetic, I cannot imagine that she is the victim of a less virulent and evil cause.

This is one of the most difficult things for me to do, to describe the passing of a magnificent Lady.

Sherrie Orpwood, and her husband Loren, have given much of their time and energy in the presentation of excellent USPSA/IPSC competition in the Jungle Run of the Dundee "Croc Match" and other matches. This is a measure of their devotion to the sport of Practical Shooting, but it is not the full measure of their contribution.

When SWMBO was diagnosed with Cancer in 2008, Sherrie and Loren revealed that Sherrie had been fighting Breast Cancer for over a year, but chose not to announce their battle until it became clear that they could offer encouragement to Sandie and to me by offering their experiences to help us deal with the pain of cancer in the context of their own battle.

During the past 18 months, they have been among the most stalwart supporters by the example of their experience, and the lessons they have learned. Sherrie, by her determination to "beat this thing"; Loren, by his loving support of Sherrie.

Now, Sherrie has lost the final battle, and her excellence may best be demonstrated by the contribution they have made in terms of time, originality and effort devoted to the creation of an excellent competitive challenge presented by the Jungle Run at Dundee matches.

Here they are, in the moment of their greatest glory ... other than their devotion to each other, and to the sport which they most loved: